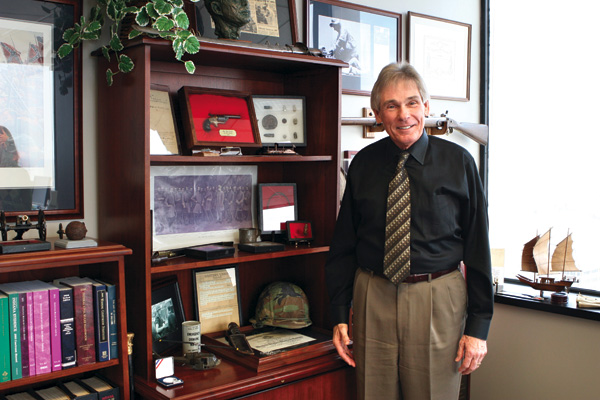 In 1966, a teenage David Jones shipped out for Vietnam. Fifteen months later, the clean-cut Marine came home to a nation that had given rise to hippies, protests, and Jefferson Airplane’s “White Rabbit.” Like many other Vietnam veterans, Jones faced scorn and criticism after his return to the United States.

Still, his military background “always has stayed with me. I’ve never lost my interest in it,” says the Maryland native. “I don’t glorify war; I hope people seek peaceful means to anything. That’s what I bring into my law practice.”

Jones, a founding partner of Jones Wallace Attorneys and corporation counsel for the City of Evansville, displays wartime relics — mostly from the Vietnam and Civil Wars — in his 16th-floor corner office in Downtown Evansville. His wife Lauren, a paralegal with the firm and chief of staff for the city’s law department, calls his office “the museum,” Jones jokes.

Much of Jones’ Civil War collection has found a temporary home in an actual museum — the Evansville Museum of Arts, History and Science. The featured history exhibit, “Reflections on the Civil War,” runs through June 26.

Code of Honor
Jones’ family has a long legacy of military service. The framed newspaper article atop the bookcase pays tribute to his grandfather, who was blinded in a submarine accident during World War I.

Military Memories
The bottom shelf of a bookcase displays Jones’ personal items from the Vietnam War: military dog tags, a Kabar knife, a helmet, and a photo of himself as a 19-year-old Marine. Jones framed his certificate of honorable discharge and a telegram from former Sen. Daniel Brewster appointing him to the U.S. Merchant Marine Academy.

Time Gone By
A display highlights Jones’ Civil War memorabilia, largely collected from artifact dealers: a Confederate musket, a wooden canteen carved with a soldier’s initials, and a Confederate $50 bill. An assortment of battered uniform buttons (framed on the wall) hangs next to a document from the Grand Army of the Republic. The organization of Union soldiers gave the certificate to Jones’ great-great-grandmother for supporting her husband, who fought in the Civil War. Also of note is the souvenir ribbon from an 1887 reunion of Union and Confederate troops in Evansville.

Battle Flag
Neatly folded in a drawer is a Japanese flag stained with blood. Jones’ uncle brought it back from a World War II battlefield, and Jones keeps it tucked away out of respect. “If I knew the family it belonged to,” he says, “I’d send it back.”

Arena Action
From his office in the former Old National Bank building at 420 Main St., Jones arguably has one of the city’s best views of the new Downtown arena. A webcam mounted two stories above his office provides a live feed of construction at www.joneswallace.com.