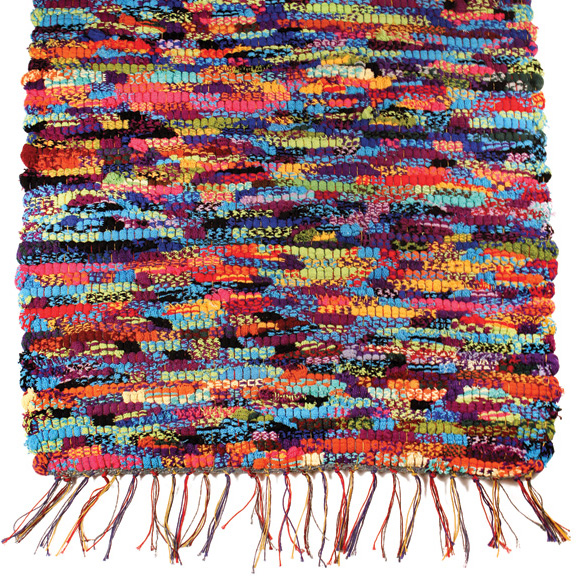 A fifth-generation rug maker, he’s made the art all his own by using only recycled materials, everything from worn-out blue jeans to even blanket trimmings.

“As I’ve gotten older, I’ve gotten more and more into recycling. I even drive a hybrid car,” the 61-year-old Newburgh, Indiana, resident says with a chuckle. “Plus, I think they make the prettiest rugs anyway.”

Blunk grew up in Northern Perry County. His family settled there in the early 1800s in what is now known as the Rickenbaugh House, a museum nestled in the middle of Hoosier National Forest. Many of his family heirlooms are on display there, including looms once used by his father, grandmother, great-grandmother, and so on, but he never had the desire to do so himself, at least not until he was in his mid-20s.

By that time, his grandmother had died, but his father looked in on him from time to time as he worked to teach himself to use a loom. Just a few years later, his father died in a construction accident, an event that instilled in him a greater desire to master his family’s art.

He uses a 115-year-old loom to weave his thick, colorful rugs. The “shaggy looking rugs”  are made from waste products from blanket companies, while the “real colorful ones” are made from Solmate Socks, a popular mis-matched sock company in Vermont. The owners send him “seconds” or defective products.

He sells them at Head to Toe Day Spa, 300 W. Jennings St. Ste. 103 in Newburgh, a business he and his wife own together, the Bitterman Mini Shoppes & Farmer’s Market, 204 Main St., and he attends the weekend farmer’s markets in Evansville and Newburgh during the spring and summer months.

He also ships them to interior decorators all over the nation who admire and respect his work.

But for him, weaving isn’t about the popularity.

“I like the creativity of it,” he says. “A lot of times when I sit down to make a rug, I have no idea what it will look like in the end. I just start weaving and wait to see how it turns out.”