Since opening on Feb. 14, 2017, the DoubleTree by Hilton Evansville already has brought a resurgence of business not seen in Evansville since the Executive Inn closed eight years ago.

The DoubleTree has experienced multiple weeks of full bookings, according to Mary Beth Lewis, director of sales and marketing for the hotel. Many of the guests are convention or meeting groups who haven’t visited due to the lack of a convention hotel. One group returning to the city was General Baptist Ministries in July. Evansville also will host the Indiana State GOP convention next summer at the Ford Center.

“We are back in the convention market,” says Bob Warren, executive director of the Evansville Convention and Visitors Bureau. “We have been out of that market since 2009. I think the benefit locally is the traffic we’re seeing.” 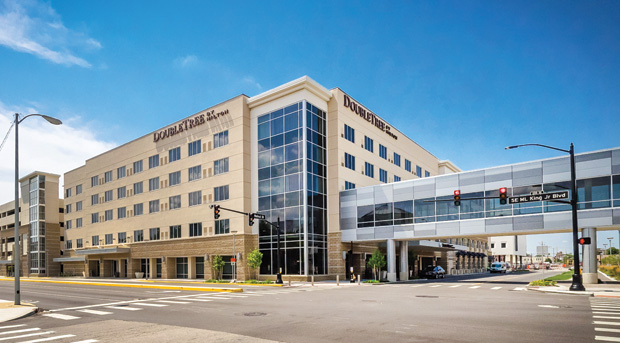 One of the biggest groups to take advantage of the DouleTree’s opening has been ice skaters in town for the 2017 National Theatre On Ice Competition at the Ford Center, filling the 241-room hotel to capacity with many of the rooms holding three to four people.

“I think there are benefits any time you bring in a conventioneer,” says Warren. “The average conventioneer spends $88 to $102 per day on goods and services purchased within the community. If you have several hundreds of those in attendance, you have this added benefit.”

A key to the hotel’s early success has been its partnerships with groups like the Evansville CVB, Old National Events Plaza, Ford Center, and Victory Theatre to attract and bring in more concerts, conventions, and events.

For more information on the DoubleTree by Hilton Evansville, call 812-423-5002 or visit evansvilledoubletreehotel.com.