Running is more than putting one foot in front of the other; it is about the mental strength to get to the finish line. Completing a half-marathon means having that mental strength and endurance for 13.1 miles.

This seems like a daunting feat, but not for seasoned runners of the YMCA Evansville Half-Marathon. For Jim Isaacs and Mary Roby, this race will be just another to add in the books. Isaacs and Roby have run in the half marathon for all 14 previous years and intend to run it this year as well.

Dr. Jim Isaacs has participated in different races all across the country since 1993. From Arizona to Maine, the motivation to put one foot in front of the other one more time has persisted within the retired principal and educator.

Isaacs began walking as a preventive measure for health issues, and participating in races provided him with a goal. He and his wife Jonna have been walking in races all over the country.

Out of all the races Isaacs has been in, however, he says the Evansville Half Marathon is one of the most well organized events.

“By the time you get to race day, everything is ready to go,” says Isaacs. “Everything the YMCA does with this race is so well done.”

The race has grown so much throughout the years, he adds. He recalls when it used to start at Reitz Hill and says it has grown into more of a community-wide event.

“We used to start at Reitz High School, which was exciting, because you are coming around that hill at dawn and get a gorgeous view of the city,” says Isaacs. “Then, a little bit farther you could see Jeff Lyons on his front porch standing with a cup of coffee, and people would yell over at him, ‘What’s the weather going to be like today, Jeff?’”

This community and inclusivity aspect is one of the reasons Isaacs keeps going back to the race. He has met some great people within the YMCA and the Team 13, the half marathon training group.

“They have all fitness levels at Team 13 — there are walkers, runners, and everything in between,” says Isaacs. “I really enjoy my back-of-the-group crowd I’ve met.” 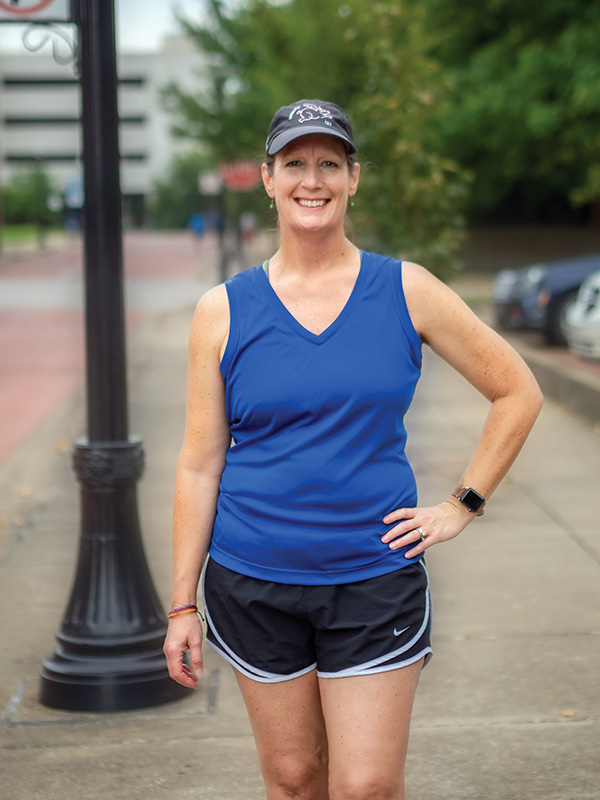 Mary Roby
Fifteen years ago, Mary Roby decided to sign up for the first YMCA Half Marathon. Since then, she has run in more than 30 half marathons, two full marathons, and participated in a few triathlons as well.

“I was really just looking for a lifestyle change, and it was the first year of the race,” says Roby. “It seemed like the perfect fit for me.”

Roby is an Evansville native and currently works at Vectren as an administrative assistant. However, she spends her free time at the YMCA volunteering with Team 13. Along with training for the half marathon herself, Roby also volunteers with the training group to help her fellow runners reach their goal as well.

“It is very rewarding to help participants reach their goals, and see the excitement from their accomplishments as we add miles and complete the ‘warm up’ races,” says Roby. “Guiding them with words of encouragement and advice helps them to achieve their goals of running a marathon.”

What first began as a way to stay in shape soon turned into another community and tradition for Roby. Every year, she ties up her running shoes and begins training for the half marathon with the friends she has formed within the running community.

“The people I was running with and the running community became like a second family to me,” says Roby.

For future runners, the best advice a seasoned athlete like Roby can give is to join a group. For her, that group was Team 13 with the YMCA, but she says the accountability and community aspect help a lot when training.

“Get with a group like Team 13,” says Roby. “You can find someone at your fitness level, and everyone is so encouraging. They don’t leave anyone behind.”

The Race
For the past 14 years, this annual fall event finds its way onto the calendars of runners all across the Tri-State. Since the first half marathon in 2004, the event has been a way to raise money for the YMCA while also bringing the community together.

Heather Lejman, YMCA special events director, has helped coordinate the race for five years. She says since the first race, the event has raised more than $1.4 million for youth programming in the community.

“We do a lot for the kids in our community, which is funded by this race,” says Lejman. “We take kids on college tours, we have free youth programming, and give kids an opportunity they may not have had otherwise.”

This year will bring new choices for runners and families. Lejman says the Y is adding an 8K race, which has the same starting line as the half marathon but is a more obtainable goal and is more inclusive to people of all physical levels. There also will be an “eFest” at the finish line, which is hosted by the chamber of commerce in coordination of the race.

“The eFest will be a multicultural celebration with food trucks, entertainment, and will be a chance for runners and families to reconnect after the race,” says Lejman.

Runners already have begun to train for the event. Whether it is with Team 13, which is the half marathon training group with the YMCA, or on their own, people from all over will flock to Evansville Oct. 13 to run just more than 13 miles. 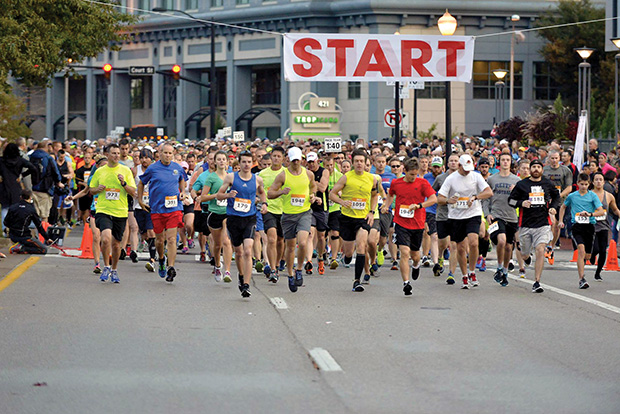