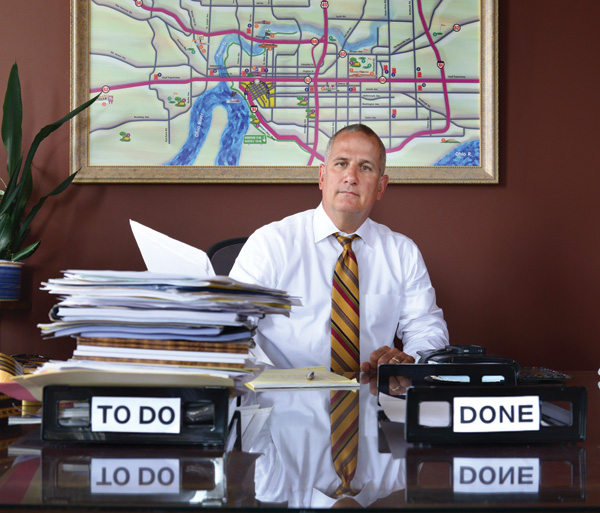 I just returned from a quick day trip to Shepherdsville, Kentucky, which is approximately 15 miles south of downtown Louisville on Interstate 65. It is a place I go several times a year because our magazine printing partner, Publishers Press, is located in the small town in Bullitt County. They also have a facility 12 miles south in the even smaller town of Lebanon Junction.

I am often asked “Who prints your magazine?” Occasionally I am asked “Do you print your magazine?” Some people then are curious why Evansville Living and Evansville Business are not printed in Evansville. We are very fortunate to have the third-largest magazine printing company in North America just two hours away, and in Evansville, there are no true magazine printers. (It might take a few more than two hours of travel from this point on, as I have recently had reason to stop along the interstate for a visitor with flashing lights, which has caused me to slow down a bit.)

Publishers Press is one of the most interesting companies that I know of. Founded in 1866, the now 148-year-old family-owned company is led by two brothers, Michael and Nick Simon, who are fifth generation Louisvillians. Prior to Michael and Nick, the company was grown exponentially under their father, a legend in the printing industry, Frank E. Simon. There are two portraits of Mr. Simon that I see in the home office and damn if he doesn’t look like the kind of guy I would’ve liked to know — big smile, holding what I am told was an ever-present cigar. Everyone has always told me he was a larger than life character.

The company now prints more than 1,000 titles and employs more than 1,400 people between the two plants. There is no nepotism policy here as multiple generations of family members work at the plant and the number of people who have 30, 40, 50 years is truly a testament to the Simon family. I have met many people over there now in managerial positions that started at Publishers Press right out of high school and never worked anywhere else.

But what I like best about a company that we have done business with since our inception is the incredible customer service that even as long as we’ve been with them, we find truly remarkable. I truly believe that starts at the top, and in this case, I know it does. There is always a direct line open to the CEO Michael Simon’s office and an “anything else I can do for you” approach.

On Aug. 1, Tucker Publishing Group celebrated the 15th anniversary of the founding of our company. I thought it was high time and hopefully interesting to learn about such an important partner who helps deliver this magazine to your mailbox every month.

The Back Talk interview I conducted with noted raconteur Pat Shoulders (page 80) was originally scheduled on a Friday afternoon for just 30 minutes prior to going to the off-site photo shoot. Who were we kidding?