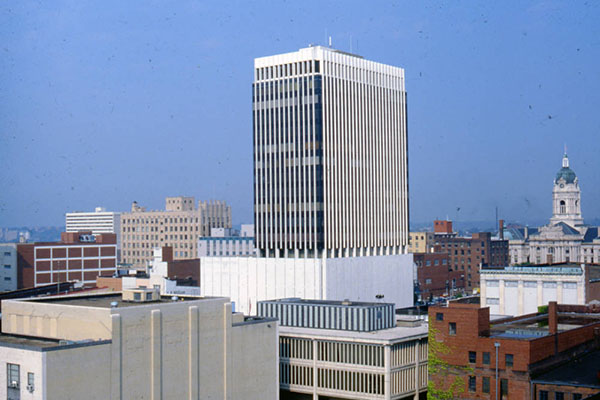 The Old National Bank Tower is no more. Brought to the ground in November 2021 by a controlled demolition fueled by 374 pounds of explosives, the 50-year-old former commerce hub of Downtown Evansville had sat largely vacant for nearly 15 years. In that time, it became a polarizing structure in the city center’s skyline. Some considered it a rundown eyesore, and it had admittedly fallen into disrepair. Others felt the pull of nostalgia and enjoyed its continued, if hollow, presence. Still others viewed it as a curious oddity of height, vacancy, and design.

Carl Conner II, an Evansville native who with his father ran the architecture firm Conner & Associates, describes the tower’s modernist-derived-from-international design as a deliberate departure from traditional building styles, a signal that a new era of business and commerce was coming. Plus, materials were cheaper to fashion a modernist structure.

The style was an eye-popping departure from Downtown Evansville’s more traditional architecture, from the terracotta façade of the Hilliard Lyons Building to the Art Deco design of the Hulman Building. And while 420 Main’s façade was certainly cutting edge, Conner says he considers the former Permanent Federal Savings Bank building at 101 S.E. Third St. — now the home of Ten Adams — to be a better representative of the international and modernist style of architecture.

“I’ve considered (the Old National Bank Tower) a good example — not great — of international style,” he says. “Was I in love with it? No.”

Others felt a sense of awe gazing up at the 18 floors of glass and reinforced concrete.

“In 1970, my grandmother worked as a teller at the bank when it was brand new. I remember going to the new bank and just being in awe of it. Downtown was very busy, and (the tower) was a place to go. That was way before Washington Square Mall or Eastland Mall ever existed; Downtown was the place to go,” says Pam Riley Heironimus. 26 years after visiting the bank as a child, Heironimus was working as a sous chef at the glamorous penthouse Petroleum Club.

While stately and certainly eye-catching, the tower did suffer some design negatives.

“The issues with 420 Main were numerous, but the worst problem was the glass. They only used single-pane windows on the glass wall, which is dreadful for such a tall building,” says Kelley Coures, a history buff and the executive director of the Department of Metropolitan Development and the LGBTQ+ Liaison to the Evansville Mayor’s Office. As a child, Coures often rode his bicycle in Downtown Evansville and watched the tower come to fruition.

“The best feature in my opinion was the ground level and the planters out front,” he says. “I thought the main level banking center was nice, but other than the Petroleum Club, not much else.”

After Old National Bank moved out of 420 Main and into its current headquarters down the street, no new landmark tenant was found, and the tower famously fell into disrepair.

“I knew it was in bad shape. I kind of hated to see it in the shape that it had been in for so many years, because it used to be so great, and now it was just empty, and everyone talked so negatively about it,” says Lisa Schroeder Teague, whose father John and grandfather Chester worked for Northwestern Mutual and had offices in the tower when she was a child. “I wasn’t necessarily surprised that they were going to take it down. I told someone I more so hated just the magnitude of it being imploded. … I would have rather them taken it down piece by piece.”

A study by Domo Development, the property’s Carmel, Indiana-based owner, found the site to be unsalvageable, and a team of demolition and explosives experts imploded the tower early on Nov. 21, 2021. Spectators lined surrounding Downtown streets, perched atop Reitz Hill, or viewed a livestream from home. As the building fell, some found the experience heavily emotional, while others were happy to close one chapter in Downtown Evansville’s story.

“I wasn’t going to watch it. Then I ended up just watching it from home, because I didn’t want to go down there. The crazy part is I live on the East Side and I never thought that I would hear it, but I did,” Teague says. “It was emotional that week leading up to it probably because I knew it was imminent, but it was like, OK, well it’s over now, so now we move on.”

“I had no emotional experience over (the implosion). My feeling was, ‘Is it was good for Evansville to get rid of that?’” says John Stuff Staser, a retired attorney with the former Stone, Keck, and O’Connor and ONB trust department.

“I think it was definitely time. The building had a lot of wear and tear and was certainly iconic for many, many years, but I think that it was time for it to come down,” says Julie McCarty, co-owner of Colonial Classics Landscaping and Nursery and a former corporate training director at Old National Bank. “I’m excited to see what the next generation is going to bring, what is going to be the new iteration for that highly visible placement in our Downtown area. For me, I’m excited about to see what’s coming.”

Dan Grimm began working at Northwestern Mutual as an intern in 1987. Now a wealth management advisor with the company, he spent 17 years peering out the office windows at 420 Main St. before Northwestern Mutual moved out in 2006. Like McCarty, his memories of the Old National Bank Tower are wistful, but he too looks forward to the future.

Photo provided by the Brad Awe Collection at the University of Southern Indiana.