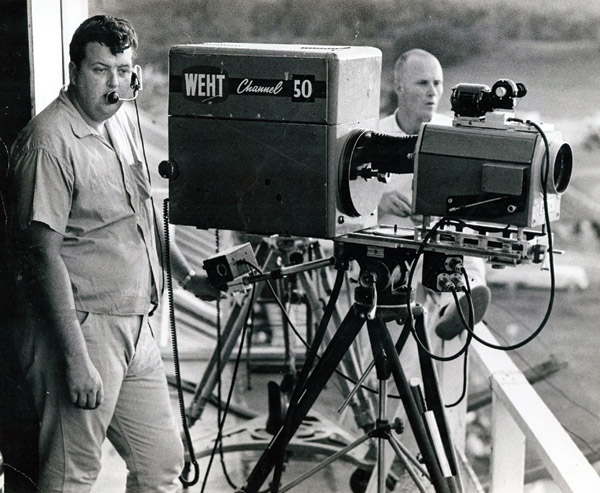 The year was 1953. Dwight D. Eisenhower was inaugurated as president. Henry O. “Hank” Roberts was mayor of Evansville. Hardworking residents were making the millionth Plymouth automobile at Evansville’s Chrysler plant, dining at The Tennessean, and attending concerts at the new Mesker Amphitheatre. If you lived in the Tri-State in the early 1950s, you knew something was up. Something big. By the summer of 1953, more than 25 million television sets had been sold in the United States. “I Love Lucy” was beginning its third year on CBS. “The Guiding Light” soap opera had moved from radio to television. More than 70 U.S. cities operated TV stations.

In Evansville, there was just one problem. The technology had not reached the river city. Tri-Staters waited until the fall of 1953, when the Malco Theater Corp. of Memphis, Tenn., and local investors including the future mayor of Henderson, Ky., Hecht Lackey, finished building a TV station on top of a hill just east of Highway 41, two miles south of the Ohio River in Henderson. WEHT Channel 50 (the letters stood for Evansville Henderson Television) went on the air Sept. 27, 1953, partnering with the top national network at the time — CBS. Their timing was perfect, because just a few months later, WFIE Channel 14 came to Evansville and partnered with NBC.

Channel 50 is now Channel 25, ABC has replaced CBS as the national affiliate, and the original 500-foot signal tower has grown to nearly 1,000 feet. Sixty years later, however, WEHT is still located on top of the same hill on Marywood Drive. And the staff is attempting to make the 60th anniversary of local television memorable by airing vignettes throughout September featuring people, events, and footage from the station’s past. The community-wide celebration will get viewers involved, and it culminates with a 60-minute special that will cover 60 years on the air.

“So much has changed,” says Brad Byrd, WEHT’s weeknight news anchor since 1978 and a key figure in producing the 60-minute special that will first air on Friday, Sept. 27. “In TV these days, we’re trying our best to keep pace with technology that is changing by the minute. But the high tech doesn’t change the basics — seeking the truth, getting it right, and keeping the trust of the viewers.”

Ninety-year-old Seymour Brodsky says he’ll be there. Most people know him better as Brod Seymour, who came to WEHT in 1954, left in 1956, and came back for good in 1968. He was program director at WEHT throughout much of his 48-year television career and also taught speech/communications and broadcasting at the University of Southern Indiana.

“Ulysses Carlini was production manager at WEHT in 1954, and he also entertained kids by playing Peppo The Clown,” Seymour recalls. “We had gone to graduate school together at Northwestern, and he was looking for a staff announcer. I was intrigued by television, so I said yes. I walk in on the first day and he says to me, ‘How would you like to be news director?’ They had just fired the news director. So I did news, Jerry Tolbert did sports, and the local manager of Eastern Air Lines came in every night to do the weather. He’d wear a shirt and tie, and his official Eastern Air Lines blazer. He made us look professional. Jerry would work the camera while I did news, and during the commercial he’d get behind the desk for sports and I ran the camera. Three minutes of news, three minutes of weather, three minutes of sports, and commercials filled up the other six minutes. National commercials were on film, but we had to do the local commercials live. That was our 15-minute newscast every night at 6 and 10. TV was brand new, and it was a lot of fun.”

Eighty-seven-year-old Elmer Chancellor will be there, too. He came to WEHT in 1956 as an engineer and for many years served as chief engineer for WEHT’s longtime parent company, Gilmore Broadcasting, until retiring for good in 1995.

“Just keeping a quality picture and sound were challenges,” Chancellor remembers about the early years. “The equipment was the best of its day, and it was expensive, but unreliable. The main tubes for the camera cost $1,300 each and only lasted about 1,000 hours.”

“The programming back then seems pretty mundane now, but we were the only station around here when we first came on. People were excited about it. I think all of us felt like we were providing a service to the community. There were a lot of televisions being sold, and if you compare the price of a TV then to wages, people really had to scrape together money to buy one. They weren’t cheap.”

You can count on 81-year-old Hal Wolford to be part of the festivities, too. Watch out, though. He may prank someone. Wolford was there from 1966 to 1998 as a reporter, news director, and community affairs director, the final 11 years highlighted by his popular “Backroads” series.

“Our sports guy was Gary Montgomery. Gary was taking banjo lessons on the side, and one day he was sitting in the lounge practicing,” Wolford says. “He was more funny than good with the banjo. I was producing the news back then, and sometimes at the end of a sportscast I’d sneak a little clip on the air of Gary doing something dumb. So I snuck in a camera behind him and got him playing his banjo. Everybody loved the banjo clip, except Gary. He was a little ticked off. One day, not long after that, I’m in the booth where we kept the teletypes that printed off the news. The door closes behind me, and Gary puts a shim in the door so I can’t get out. He’s outside with the news camera on me as I’m pounding on the door to get out. That ended up on the air, too. It was much looser back then. We’d get fired for doing that today.”

The list of on-air talent, management, and technicians that made an impact on WEHT programming since 1953 is a long one. Peggy Mitchell hosted one of the nation’s longest running children’s shows, from 1961 to 1986. In the later years, kids would appear on Peggy’s show along with their parents, who had sat with Peggy and squinted into those bright studio lights two decades earlier. The Santa Clothes Club and Easter Seals Telethons have been fixtures at WEHT for decades. Bill Weber (NBC), Paul Emmick (The Weather Channel), Jacqui Jeras (CNN) and Nischelle Turner (Fox, CNN) were among those who took their TV talents to the national level after working at Channel 25. Lloyd Winnecke went from reporter and news director there to eventually become mayor of Evansville.

Probably best known from the station’s alumni was the late Chic Anderson. In the early days of Channel 50, Anderson worked as a sportscaster and also worked in the mutuel department at Dade Park (now Ellis Park), the local Thoroughbred racing horse track. His voice and knowledge of the sport led him to become the track’s PA announcer in 1959, and one year later he took the same job at Churchill Downs in Louisville. That’s where CBS found Anderson and asked him to lead its TV team along with Jack Whitaker and Heywood Hale Broun in coverage of the Kentucky Derby, Preakness, and Belmont Stakes. Anderson is credited with what many consider TV’s most famous call in horse racing history — Secretariat’s 30-length win at Belmont in 1973 that produced the first Triple Crown winner in 25 years.

“One thing about the early days — you couldn’t let little problems bother you,” states Chancellor. “One night they had a sheep in the studio, something to do with a news story. That sheep got to baaing during Chic’s sportscast, so the fella handling the sheep grabbed its nose and shut its mouth to keep it quiet. The poor thing sounded even more pitiful, like someone was killing that sheep right in the middle of Chic’s sportscast. Chic started laughing on the air and couldn’t hardly get started again. Those things happened back then. It was live television. You just went on.”

For more information about WEHT, visit tristatehomepage.com. A 60-minute anniversary special will air on Friday, Sept. 27.