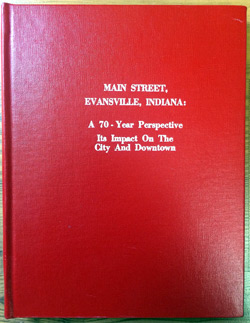 Happy New Year! I hope you all are warm and safe in our winter storms.

While the Indiana General Assembly is doing the “heavy lifting” — to quote State Rep. Vaneta Becker — gaining approval to increase the Indiana Regional City Fund to fully allocate $42 million to each of three regions, let’s take a look back at some of the plans, successful and not so, that are stored on our city leaders’ shelves.

I really don’t know if the plans I reference still are laying around, but I studied them all for my master’s degree thesis, “Main Street, Evansville, Indiana: A 70-Year Perspective,” completed in 1999.

For background, in December Gov. Mike Pence and the Indiana Economic Development Corp. Board of Directors announced the approved plans presented by regional development organizations in Southwest, North Central, and Northeast Indiana. Each needs approval from the state legislature on each area of their plans but they may receive up to $42 million in state-matching funds. The first $84 million, generated through the tax amnesty program, was increased to $126 million allowing three regional cities to be selected instead of the two, as outlined in House Bill 1403. Now the legislature is seeking funding for all three.

Here is a look at a few of our city’s development plans and reports through the years (in more than 300 words, to make up for the delinquency of this blog post).

Fantus Company Plan, “The Foundation for Evansville’s Future, Inc.”, 1959. This report, according to a 1976 interview with Joseph O’Daniel, “pulled all the skeletons out of the closet …. We were negative in the community.”

Foundation for Evansville’s Future, New Image Campaign, resulting from Fantus Plan. This was a grassroots plan involving people in contact with the public.

Central Business District Development Committee and the Winslick Associates (St. Louis, Missouri) study. This late 1950s study on retail volume forever altered the complexion of Main Street as it suggested shrinking the core of downtown and anchoring it with a Civic Center on one end and “Riverside Development Area” on the other end.

Mayor William Davidson’s Traffic and Safety Council Plan, 1959, proposed to limit parking on Main Street or clear it of traffic all together.

Raymond A. Anderson Plan, early 1960s. This plan, authored by the executive secretary of the Redevelopment Commission, eliminated nearly 50 percent of the housing units in the city’s core.

Victor Gruen Master Plan, 1967. Mayor Frank McDonald announced this plan would not call for a lot of “bulldozing,” unlike prior plans. The plan stressed the importance of attracting one or two large Downtown department store within a Main Street Mall, a completely enclosed two-story pedestrian thoroughfare with all-season temperature control, adorned with greenery and artistic seating, with trams and mini buses providing service from parking and residential areas.

Blue Ribbon Committee, 1969. This committee of 32 prominent businessmen suggested the Main Street Pedestrian Mall, or Walkway. Its focal point was to be a fountain at First and Main Streets.

Landeco Plan, 1970. Partnering with a young Indianapolis company, Evansville looked to develop the riverfront with a new building every six months, including a 23-story convention center hotel, four 19-story apartment complexes, and two 19-story office buildings. A portion of First Street was slated to be a pedestrian walkway. Landeco brought the city one building, the 14-story Riverside One apartments, razed in 2003 to make room for Vectren. (I lived there before I was married.)

1984 Master Plan. Highlights included additional repairs and development of the Old Post Office, a $4 million riverfront boulevard that eliminated the concrete levee that for decades cut off Downtown from the river, dozens of new apartments and townhomes, trolleys, turn-of-the-century lamps, and wrought-iron park benches. As well, the plan called for a “cultural campus” on the riverfront featuring a 1,500-seat auditorium and a 600-seat theater for plays.

William Robinette and the Foster International Plan, 1986. This was the Pittsburgh, Pennsylvania-based company that would implement the projects in the 1984 Master Plan, including the Old Post Office Retail Village and the Riverfront Condominiums, for which ground was broken in 1987.

1988 Halcyon (Washington, D.C.) Report. This plan updated the 1984 Master Plan and noted that it was stalled because “no clear leader or group” was willing to take charge. It also said the Walkway should be “left alone” with no further investment.

Coopers & Lybrand Feasibility Study, 1990. This study was commissioned by the city to look at establishing a Downtown hotel-convention center and performing arts complex. This plan recommended the renovation of the Victory Theatre and expansion of the Vanderburgh Auditorium. The plan eventually included transforming the Sonntag Hotel, adjacent to the Victory Theatre, into the Signature Learning Center, now Signature School.

Peckham Guyton Albers & Viets Updated Master Plan, 1995. Led by a group of connected business leaders, this master plan took into account the new riverboat casino, Casino Aztar (now Tropicana), opened in 1995. It featured a one-block events plaza at the foot of Main Street, complete with a carousel, stage, glass enclosed gazebo and fountain, and a bicycle path along the riverfront. It also suggested removing the canopy structures along Main Street, considered an eyesore. (Many of the canopies remain today.) Finally, this plan called for a major face lift to Dress Plaza and the esplanade along Riverside Drive to creating serpentine tiered seating and installing interpretive boards along the guardrail outlining the history of the river.

In the 17 years since I wrote my thesis, Evansville has created more plans. What’s at stake with the Great Southwest Plan for the Indiana Regional Cities Fund, is, of course, more than a master plan and encompasses more than Evansville and its Downtown. Still, this look back might be useful.

In a 1999 interview with the late Bill Brooks, longtime board member of the Evansville Convention and Visitors Bureau who retired from Citizens Bank, told me, “We have a tendency to commission these big plans then put them on a shelf. If you do a study, you must have a group to push it forward.”

Evansville has that group in the Economic Development Commission of Southwest Indiana and the region has been awarded the state funding. Now, let’s get started.