His daughters Julie Abell, Amy Winchester, and Ginger Bushur remember their father’s love of Chevys, going fast, and showing off his classic cars. And they remember the joy he found before his death in his restored 1956 Chevy Bel-Air.

“He always wanted to get a 1956 Bel-Air like he had when he was younger. Same colors and everything,” says Abell.

The shell of the car was purchased by David 14 years ago, two weeks before the death of his wife Donna. Shortly after Donna’s passing, David was diagnosed with colon cancer and began a long battle with the illness. With his daughters continued encouragement to finish the car, David contacted Eric Hafford of Leitchfield, Kentucky, to help with the restoration. Through the process, David would keep his girls in the loop on the progress of the car, sharing with them color schemes, parts he ordered, and more.

“He was really excited when he finally got the Bel-Air because it was like a piece of him that always had been missing,” says Bushur. “It took him back to being a teenager again, brought back a lot of good memories for him.”

A former drag racer, David also loved to show off other classic cars he owned. His daughters plan to keep that tradition with the Bel-Air, taking it to shows in the area.

“We will not let this car go,” says Winchester. “That will be a piece of our dad we will keep forever.” 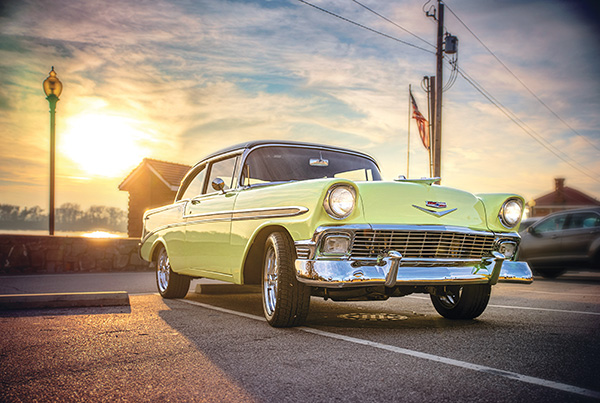