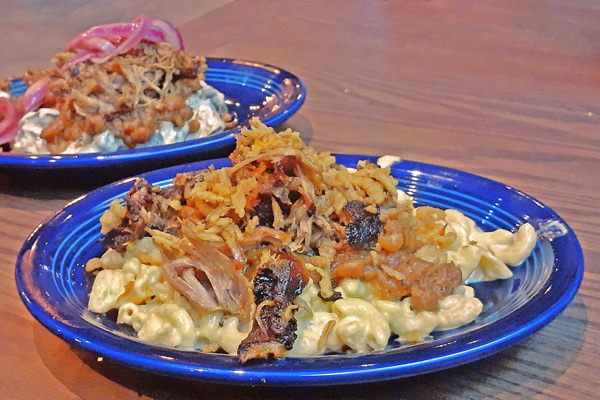 A floor-to-ceiling garage door on the storefront of Homer’s Barbecue (128 Second St., Henderson, KY) opens the restaurant to evening traffic in downtown Henderson. The buzz of big screen TVs broadcasting the night’s sporting games and the chatter of patrons perched at the street-facing barstools seep onto the sidewalk.

You may not hear the upscale sports-bar atmosphere of Homer’s before you see it, but you will definitely smell it. Smoky, hickory scents waft from tables covered in cold beer pints, classic appetizers like barbecue nachos, and savory house-smoked meats, enticing passersby to grab a table.

The restaurant, which opened Nov. 16, is the latest installment in owner Casey Todd’s downtown dining takeover. The Henderson native opened the Southern comfort spot Hometown Roots (136 Second St., Henderson, KY) in 2018 which, alongside his other venture Roast Coffee Bar, resides in the same city block as Homer’s.

Named for Todd’s great-grandfather Homer Ward, a Henderson barbecue legend who owned Homer’s Bar-B-Q in the 1970s, the barbecue concept is a standout from traditional barbecue joints in the Tri-State.

Its recipe for success starts with a carefully constructed blend of classic pub elements, from domestic beers to TVs and speakers, and a clean, modern aesthetic for furnishings and decor. Ingredients end in a simplified yet still satisfying menu that keeps guests coming back.

For $10, diners can split the Pork Cakes — deep-fried pork mixed with cream cheese, candied jalapenos, and caramelized onions. The three warm, pull-apart patties are garnished with slaw and a drizzle of sweet barbecue and Carolina mustard.

All of Homer’s tableside sauces are homemade and can stand alone or be combined to enhance flavor profiles. While the $10 Mac & Cheese Bowl’s pile of steaming macaroni and cheese, baked beans, and crispy onions is already topped with the sweet barbecue sauce, a dash of the Alabama white sauce on one side and the Carolina Mustard on the other increase the dish’s creamy-textures and tangy bite.

Can’t decide between a comfort bowl, hearty sandwich, and the house-smoked meats? Pulled pork, brisket, and chicken can also be added to any bowl for a $4-$6 upcharge.

Homer’s has found early popularity with soft and grand opening events and good reviews in local dining social media groups, but Todd’s vision isn’t yet complete. Tacos and a range of desserts are currently listed as “coming soon” on the menu, and adjustments to the beer and “half-assed” cocktails, as Homer’s official Facebook page describes them, are expected as the staff settles into operations and collects more community feedback.