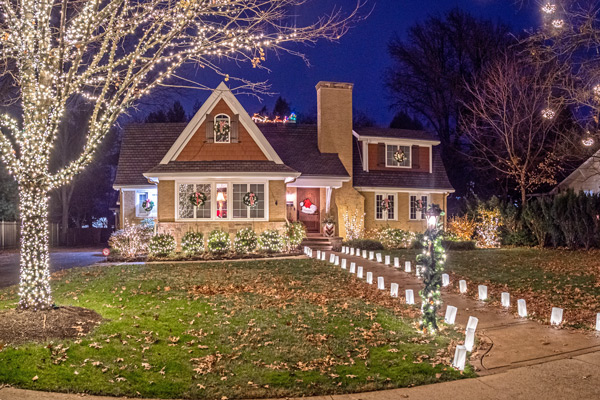 Each December, if you find yourself turning south onto Lombard Avenue from Lincoln Avenue on Evansville’s East Side, you undoubtedly have been greeted by a cluster of lights on a distant lawn. Intrigued, you may have moved ahead, crossing Bellemeade Avenue and drawing closer to the 700 block of Lombard to get a better look. What awaits is a gorgeous spectacle of bright, white lights flooding a front lawn in winter shapes. But the biggest draw is “the tree,” seemingly covered from head to toe in a flood of white bulbs.

The homeowners have been stringing up lights in their front yard since 2014. Their first canvas was a young red maple tree, planted after the family moved there in 2006. Lights were wrapped around the tree trunk and up into the limbs — so high, in fact, that they appeared to stretch right to the tree’s tips, although they don’t actually go quite that far.

Lighting the way has been Wilde Horticulture owner Brian Wildeman, who the homeowners met when their children attended the same school. A proponent of using lights in innovative ways, Wildeman has partnered with the homeowners to produce a custom light display each holiday season that is elegant, impactful, and displays their personality.

“We have about 25 houses that we put lights up for,” Wildeman says, adding that great care goes into each detail. “We treat the decorations like flower arrangements.”

A team from Wilde Horticulture begins setting up the display in November, Wildeman says, before the weather turns very cold. The lights take a small, multi-person crew about two days to install, using a lift to access the very top limbs of the tree. Wilde Horticulture also disassembles and stores the lights each year, allowing the homeowners to enjoy the display without dealing with the pain of wrapping the tree or frustration of finding that a string of lights has gone out.

“The tree was half the size when we started. At first, we could install the lights using ladders,” Wildeman says. “As it grew, it became more impressive. (The homeowners) give me freedom to do it and keep expanding it.”

The result has been a display so enchanting that the homeowners have added to it little by little.

“The first year, the lights were strung on the tree and bushes. Later, we added wreaths to the windows. A few years later, we hung the snowflake balls in our other front tree,” the homeowners say.

This year’s addition was a Santa Claus and sleigh atop the roof, although this feature is more visible during the day. Also new this year: A leg lamp a la “A Christmas Story” perched in the front window, a surprise the husband arranged while his wife was out of town. The homeowners also place luminarias down the length of their front walkway each year, adding a reverent note to the holiday display.

While neither the homeowners nor Wildeman know an exact count of lights used — that number has long been pushed to the back of their minds — they estimate about 10,000 bulbs are employed for the current display. As the tree has grown, more lights have been tacked on to cover the additional growth, necessitating the implementation of multiple fuses to handle the strain.

Such a large concentration of lights also usually means a pricey jump in one’s energy bill, but the homeowners say a clever use of commercial-grade, energy-efficient LED lights has resulted in barely an increase in their electric bill — and an incentive to keep adding more lights to their lawn.

Something that hasn’t been encouraged is leaving the lights up year-round, something the homeowners once talked about doing.

“As tightly as we wrap (the tree), as it grows, you can’t really get away with it. You can do it for maybe a year or two, but not longer than that,” Wildeman says. “Squirrels have chewed on (the wires) too. Leaving them up means you have to deal with more wildlife issues.”

What’s not up for debate, though, is the reception the lights have gotten. Passersby on foot and in cars have stopped to admire the display or take photos of it, even knocking on the homeowners’ front door to convey their awe.

“They tell us how much they enjoy our light display,” the homeowners say. “Traffic definitely increases on nights closer to Christmas.”

To enjoy the lights on Lombard and throughout the Evansville area this holiday season, visit the Facebook group Evansville Christmas Lights for a map and descriptions of local light displays.

“We’ve done it so long that not having it would feel like something was missing,” the homeowners say. “It would be like not having a Christmas tree in the house.”