Amid the shifting weather of early March — so common in southern Indiana during this particular time of year — the University of Evansville was preparing for a busy weekend. The campus was inaugurating its 24th president, Christopher M. Pietruszkiewicz.

In the front room of the May House (a home on Lombard Avenue that has served as the university president’s home since 1982), the snow on March 3 didn’t quell the excitement of the Pietruszkiewicz family. Chris’ wife Siobhan, who had a busy schedule of university events since Thursday, has the couple’s two sons — Ryan, 13, and John, 9 — dressed in suits for the occasion.

“Today we have the same schedule,” says Siobhan. Over the past few days, she and Chris both note they haven’t seen much of each other. “It’s been a whirlwind.”

The family is finishing their final preparations before heading out — their schedule is packed with a Sunday service at Neu Chapel, a luncheon at the Children’s Museum of Evansville, and finally the inauguration ceremony in the Victory Theatre. There’s not a nerve in sight at the Pietruszkiewicz home, however — just all smiles.

“Looks like you want to take Nora with you on your suit,” Chris comments to John as he takes a lint brush to his son’s suit. Nora is the family’s dog. “Is that what you’re trying to do?”

“Will there be food?” Ryan asks.

“There will be before at the children’s museum,” says Chris.

“I think we’re a little over dressed for a museum,” says John.

Though the weekend ceremonies officially install Chris as the president, the family has been well installed in the city since July 2018. The boys attend Good Shepard Catholic School, which Ryan says he likes a lot. They’ve also been participating in local sports since arriving in the city; Ryan plays basketball and baseball, while John does the same along with taekwando. 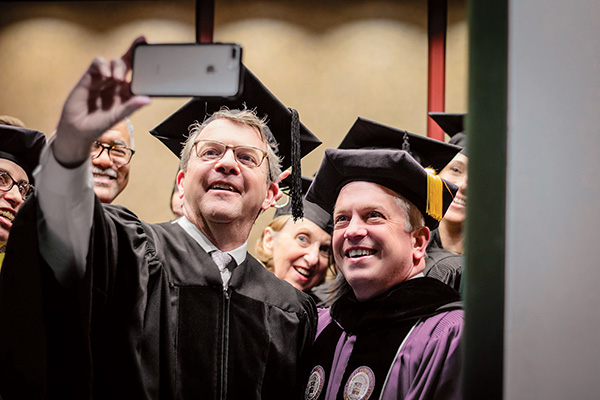 Chris already has a rapport with the students — they’ve given him a nickname, Prez P, to cut out the sometimes awkward pronunciations of his last name. The boys are well-known by students and faculty; John often “co-stars” in the weekly videos “Friday Wrap with President Pietruszkiewicz,” posted every Friday by Chris.

And during the week leading up to the inauguration, the UE community near and far were treated to fun facts about Chris posted on social media — they included interesting tidbits such as Prez P’s spirit animal (declared an otter by student leaders as it represents “positive energy”) and how he and Siobhan met (they both were refereeing a high school basketball game).

“It’s been a good weekend,” says Chris. “I know today is the inauguration, but all weekend has really been a celebration about the whole university.”

It’s a theme that runs through the day — it’s not just about Chris; it’s about the University of Evansville as a whole.

Christopher M. Pietruszkiewicz is an attorney by profession. 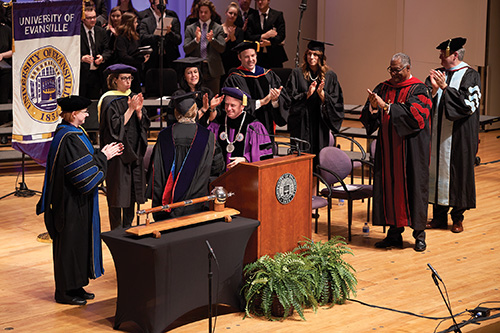 ▲ During his inauguration speech, Chris touched on the history of the University of Evansville and the higher standard for which the school will continue to strive.

Jumping into academia came when he served as an adjunct professor of law at George Mason University School of Law, Arlington, Virginia, in the early 2000s. In 2001, he accepted a position at the Louisiana State University Paul M. Hebert Law Center, Baton Rouge, Louisiana, where he was the J.Y. Sanders professor of law and vice chancellor for business and financial affairs. Before accepting the presidential appointment with UE, Chris spent six years as the dean and professor of law at Stetson University College of Law, Gulfport, Florida.

Being an expert in tax law may not seem exciting, but Chris is far from the stereotypical boring lawyer. It’s hard not to smile around him; his easy-going personality makes him approachable, and he is the first to walk up to a group and shake hands.

This trait is on full display Sunday morning. At the front of the Neu Chapel, Chris’ mother, two brothers, godfather, and other family members wait with hugs and greetings. President Pietruszkiewicz only makes it a few rows in before he stops and smiles as a large group catches him.

“I didn’t recognize you all there,” he says with a grin before leaning over to shake hands.

There are no more than 75 people filling the seats of the small chapel on this snowy morning. As the room settles, Chris makes his way to introduce himself to Bishop Julius Trimble, who serves the Indiana Episcopal Area (the Indiana Conference of the University Methodist Church) and is visiting the campus to give the Edgar M. McKown Address. The men share quiet laughs, and before the prelude, Chris extends an invitation to the bishop to attend a luncheon at the Koch Children’s Museum of Evansville, the next stop of the day.

The falling snow around lunchtime isn’t the biggest concern of those filing into cMoe after the morning church services — it’s the blistering wind.

Guests rush into the warmth of the museum and immediately are greeted by Chris and Siobhan. The couple warmly welcomes university board members, professors, and community leaders. They also talk with fellow university leaders Ronald Rochon (University of Southern Indiana) and Jonathan Weinzapfel (Ivy Tech Community College).

Former UE president Tom Kazee and his wife Sharon bustle into the museum as well — the couple have traveled to Evansville for the inauguration and, after a brief moment with the Pietruszkiewiczs, they find themselves in the middle of UE faculty members and others welcoming them back. 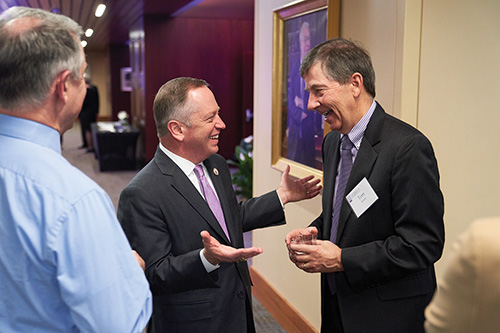 After the guests make their way upstairs to the Spark Room, the Pietruszkiewiczs follow. Each floor teases the boys with new places to explore — on the third floor, John begs to go play in the rooms but is denied. Before the conclusion of the luncheon, there will be one more impassioned plea from John to play. Chris almost says yes; John made a good case after all. Ultimately though, the plea is denied.

Back stage at the Victory Theatre, there is a bustle many would expect with an upcoming performance. The university’s wind ensemble is working through a warm up while downstairs, members of the choir patiently wait.

Slowly, others begin to trickle into the dressing room area — university trustees to the right, delegates from other schools to the left. As they begin to pull on full robes and regalia, the Pietruszkiewiczs are guided into a private dressing room.

After a few moments for just the family, Siobhan, Ryan, and John head out to their seats, situated in the middle of the upstairs balcony. Meanwhile, as trustees are lined up to be taken upstairs first, Chris walks out in full regalia, which means purple robes from head to toe.

“How do I look?” he asks the trustees lined up in their black robes, his arms spread wide for them to take in the sight. 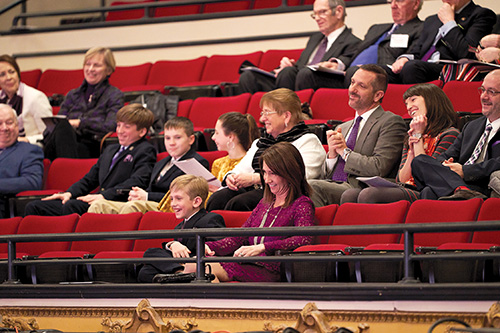 ▲ John and Siobhan sit in the front row while Ryan, far left, and the rest of the Pietruszkiewicz family from out of town take the second row of the balcony.

He is ready to head up, but he has to wait. While the university delegates are taken up the stairwell, the trustees are filed into groups on the elevator. Chris waits patiently for his turn. Many speeches will be given at the ceremony, but the final speech is the inaugural address by the new president.

It’s something Chris has worked on for two months, says Patti Lippert, executive assistant to the president. “I can’t believe how calm he is,” she says with a smile.

Finally, the last elevator fills up — it’s packed full, but Evansville Mayor Lloyd Winnecke and Board of Trustees Chair Linda E. White coax Chris on board with them. On the main floor, as the elevator opens, Winnecke asks everyone to pause a moment.

“Let’s grab a quick selfie,” he says, stretching his arm out.

Everyone crowds in behind him as he snaps the shot. As Chris exits, university delegates from across the Midwest and South quickly jump forward to shake his hand. USI’s Rochon asks for a quick picture. Stephanie Lefler of Valparaiso University steps up next.

“If there’s anything you need, please let us know,” she says.

The line into the theater shifts, little by little, until finally, Chris stands with UE assistant professor of sociology and Grand Marshal of University Ceremonies Dr. Mari Plikuhn — she holds the University Mace and will escort Chris into the theater.

“You ready?” Chris asks her.

“Yeah,” she replies confidently with a smile.

The two fist bump, and as the music swells, Plikuhn leads Chris down the aisle and to the stage for the start of the ceremony — 2 p.m. on the dot.

“It almost feels like a wedding, doesn’t it?” White comments during her welcoming remarks. The crowd chuckles in agreement.

Instead of a couple exchanging vows, the climax of the inauguration is a newly invested Christopher M. Pietruszkiewicz giving his inaugural speech.

“I want to remind you that there is a legal presumption that you are all here voluntarily, so thank you for that,” he says after he gives his first remarks. “I’ll remind you of that, because you have chosen to listen to a former tax attorney, dressed from head to toe in purple.”

Through the speech, there is an underlying theme: reaching for a higher standard. It’s reflected in the 18 words of UE’s new mission statement, he says — “to empower each student to think critically, act bravely, serve responsibly, and live meaningfully in a changing world.”

He shares stories of trailblazers from UE’s history, including Zerah Priestly Carter, the first African American to graduate from the school, and Dr. William Ridgway, whose contributions include the purchase of Harlaxton Manor in Grantham, England. He speaks on the foundation of the university in the city and how Evansville has embraced the institution into the fabric of its culture over the last 100 years. 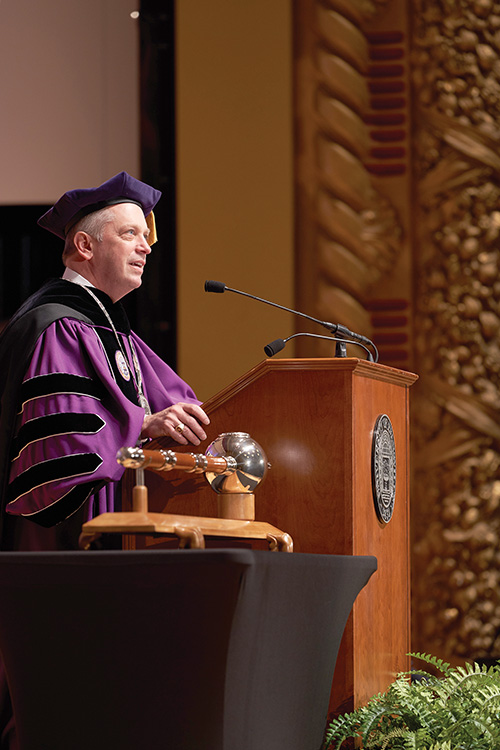 “Today, our university is poised to change and strengthen that same Evansville community that believed in us 100 years ago,” says Chris as he touches on UE’s recent Ashoka U Changemaker Campus designation (UE is only one of 25 schools in the U.S. and the first in Indiana to earn the honor).

The strength of the university’s past gives it a vision for the future; and for Chris, he says the future of UE continues to lie in its students. Near the close of his speech, he harkens back to the 18 words he shared at the beginning.

“Eighteen words remind us that it is our responsibility to empower our students to make their dreams a reality and to make our communities better,” he tells the audience. “Eighteen words highlight the foundation of our university, creating our deep commitment to the students who trust us to prepare them for a changing world — to think, act, serve, and live meaningfully.”

After the end of the ceremony, White’s wedding metaphor rings true again as Chris waits to accept handshakes, hugs, and quick chats from nearly everyone who exits the theater. After six hours, there is no sign of fatigue; if anything, Chris seems more energized.

Finally, close to 5 p.m., the Pietruszkiewiczs arrive back at the May House. In their car, Chris and Ryan loudly play “Drift Away,” by Dobie Gray.

With family members arriving shortly for dinner and a chance to unwind, the Pietruszkiewiczs change out of their Sunday best. Walking into the living room, Chris lets out a big sigh, but grins brightly. The day hasn’t been a blur at all for him — unlike a wedding day.

So what’s next, now that he’s officially inaugurated?

“Now we get to implement everything we talked about,” says Chris. “We have lots of planning to do for the next 100 years. Today was the call; tomorrow is the work.”