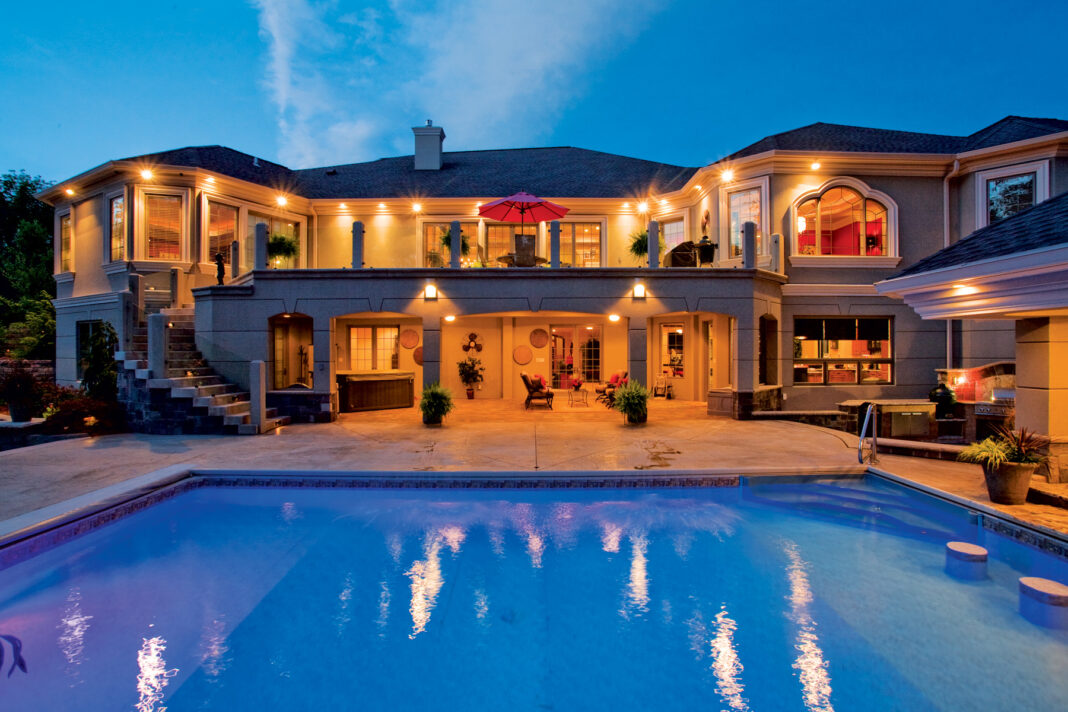 Vicky Carson asked for a new kitchen countertop. Her wish was granted — the centerpiece of her kitchen now is an island topped with stunning Tropical Treasure granite, sliced and pieced together like a leopard’s skin. Surrounding the kitchen is 9,500 square feet of signature Florida architecture, built from May 2008 to October 2009, in Eagle Ridge Estates in McCutchanville, Ind.

“Our desire to build was a result of wanting more kitchen space,” says Vicky’s husband, Dave Carson. “We entertain a lot, and the kitchen in the condo was just too small.”

Dave and Vicky Carson had lived in a condominium at Oak Meadow Country Club for more than 10 years before deciding to take on the kitchen project that ultimately resulted in construction of a new home at another McCutchanville golf course development.

Dave, president and CEO of CHEM Group, a specialty chemical company that began in Troy, Ind., near Tell City, in 1979, had never built a home. Vicky, on the other hand, was the daughter of a contractor and previously had built four houses. The couple, who also own a home in Hilton Head, S.C., where they routinely spend the spring and fall months, hired Randy Sheffer, president and CEO of Sheffer Construction & Development to build the home. It was Sheffer, Dave says, who “pulled it all together.”

“The Carsons helped me do my best work,” Sheffer says. “They were flexible and had the resources to do what we wanted to do.” And what they wanted to do, Sheffer adds, was build a house with a style like no other. “Building this home took a lot of creative thought and engineering,” says Sheffer, who holds a bachelor’s degree from Murray State University in Murray, Ky., in civil engineering and construction technology, and grew up working construction with his dad and brothers in Union County, Ky. Commitment from subcontractors who “all took the job to heart,” says Sheffer, and employees of his company, most of whom have worked with him for more than 10 years, made the intensive task of building a custom home of that scale manageable — and enjoyable.

When the home was completed, the Carsons celebrated with a huge party for everyone who had worked in the construction of the home. “We used so many talented suppliers,” Vicky says. “I could sit here all day and watch the guys saw and cut. It was amazing.”

Vicky derived much of the inspiration for the home from travels with her husband and from an idea folder she maintains. “I like what I like,” she says. “I like a mix of things.” A hairdresser early in her adult life, over the years Vicky has developed, her husband says, “her hobby of making unique crafts for events, special occasions, and our home.” (A large and well-appointed craft room on the lower level provides Vicky the space she needs for her crafty side.)

Her creative talents and the couples’ home have been showcased dozens of times since its completion. “We have hosted several wedding receptions, company holiday parties, and with nine grandchildren, the gatherings are frequent and fun,” Dave says.  Evansville-born country music singer and songwriter Jason Clutter performed for a party at the Carson home.

“It’s a wonderful thing to have a home built beyond your expectations. Randy and all the contractors have done that for us so we can truly enjoy our family and friends,” Dave says.[pagebreak]

Though the massive house defies traditional architectural descriptions — on the whole, it’s neither traditional nor contemporary — unique recurring design elements and material use set the tone from the moment guests step inside the foyer. A stunning French chandelier crafted from one sheet of stainless steel and crystal is suspended from the medallion ceiling, a pattern brought in from the home’s driveway, also appearing on the floor below.

Ceilings in the home are 14 to 16 feet high and incorporate intricate coffering researched and designed by Dave and engineered by Sheffer. Similar curvilinear patterns are revealed on the portico to the home, the front door, and flanking windows, as well as in intricate ironwork (by Chester’s Iron Shop in Evansville) in the kitchen and wine cellar.

Personal touches abound in the home that was furnished and outfitted from local sources, travel finds, and Internet resources. The centerpiece of the downstairs landing is a water wall and mixed media art installation by Vicky’s son Michael Weber, an artist living near Orlando, Fla. Dave describes his art as utilizing “overlay, mapping, and mirroring.”

Thoughtful use of paint color contributes significantly to the home’s personality. Local painter Logan Brand (who at 7 feet tall has a physical advantage for painting large spaces), used varying tones of “Carson Tan,” a dominant paint color in the home, to highlight details of the coffered ceiling in the family room; innovative painting techniques, including faux painting, were employed throughout the home to emphasize design elements.

Moving from a condominium required the Carsons to furnish and adorn the home with new purchases, providing an opportunity for Vicky to collaborate with her friend, interior designer JoAnn Westover. Though some pieces were brought from the condominium (a bold red bookshelf in the foyer, reconstructed for the new home) and procured from the couples’ travels and global Internet sources, most of the new furnishings were acquired from Lea Matthews Furniture & Interiors.

Behind the scenes, two mechanical rooms serve the home with state-of-the-art heating and cooling, security, home electronics (controlled from Dave’s iPhone), and a resourceful hot water system that heats the home’s pool, driveway, and sidewalks, assuring Dave he won’t be clearing his pavement of ice this winter.

Surely winter is a distant thought for the Carsons, as they enjoy their second summer relaxing at their backyard pool  pavilion. Design elements from the home are incorporated into the outside living space, including a wavy coffered ceiling above the pool deck and abundant use of granite and stone (from Interstate Stone Supply, Newburgh, which also provided the unique granite inside the home). The sports pool features a swim-up bar, served from the full-service poolside kitchen.

“The best times we have with our home is to just sit back and relax,” Dave says, “although choosing where is sometimes hard to do. Randy and all of the contractors have really gone beyond our expectations. We are so fortunate on how it all came together.”

•  Click to view additional photos of the Carson home.