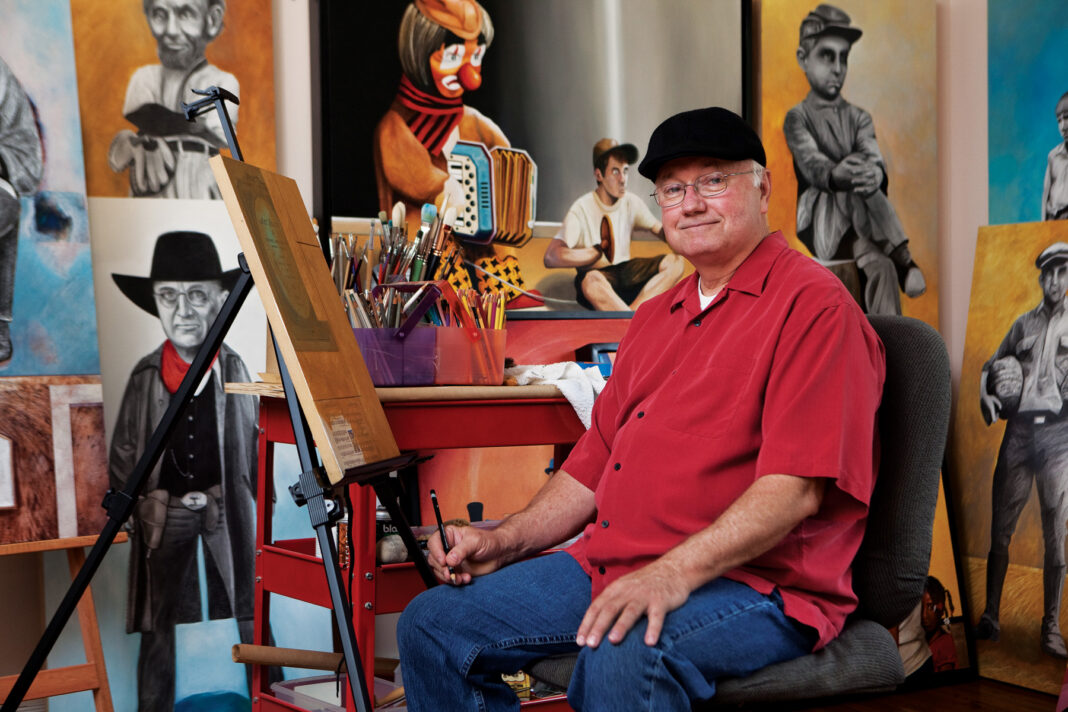 Abraham Lincoln was never a professional baseball player. The 16th president met his fate in a theater balcony before America’s pastime had players with multimillion-dollar salaries. Artist Michael Pittman suspects Lincoln would have made a great ballplayer, so he gave Lincoln a tryout. His painting, a piece displayed at a recent exhibition at the Arts Council of Southwestern Indiana, depicted Lincoln as a 1920s-era player. “I felt like the kind of rawboned guy that (Lincoln) was, he probably would have been a good baseball player,” Pittman says. “I gave him a chance to be what he didn’t have the chance to be.”

The piece was one in a series of paintings with a magic realism style (a realist technique combined with dream-like images). But it isn’t Pittman’s longtime technique. The Evansville native began as an abstract artist in the 1970s. He used “words in the art,” he says, “but I didn’t want to be cliché by putting words in the art that said something that led people to think more about the words than the art. A lot of my work back then used words and letters in the painting though they weren’t really readable. You read them as words, but they just didn’t have any meaning.”

Forty years later, Pittman, 60, views his art with a different enthusiasm than his ’70s youthful ambition. “I’m more comfortable now and more charged up about my art now than I’ve ever been,” he says. “Maybe that’s because I stopped caring so much about who really liked what I was doing.”

I’ve always been quirky. In my toy painting series where I did work with magic realism, I was almost taking a surrealist approach without really calling it that. Magic realism is a broad term. A lot of people refer to their work that way, but when you’re making toys that are bigger than the people (in the painting) or manipulating the people like I was doing, then it becomes magical.

The first time I thought that I had an artistic voice of my own was probably after college in the late ’70s when I was doing nothing but abstract paintings and using a lot of experimental techniques. Pretty much whatever I could do to apply paint and manipulate it like using a wax resist. When I started to do that, I thought I had a voice that was powerful. Financially it was too, because I sold almost everything I made back then.

I love American history. I like looking at the old archives of photos from the Civil War era up to World War I. There’s a lot of great street scenes of crowds. I would see a crowd scene, and I would pick out an obscure person in the crowd. It was like I had a connection with that person.

When I see a person in a crowd, he or she isn’t the subject of the picture. I don’t even know who they are. I think it’s neat that that person, even though they have been dead for 100 years maybe, has another life for a while — at least through my painting. I would hope that one day somebody picked me out of a crowd in a picture and brought me back to life.

I picked Lincoln because I also was born on Feb. 12, (as was Lincoln) and I felt the connection for that reason. It was a way for me to take my love of history and not end up wasting all the time I spent looking at those old photos.

If you’re not having fun doing it, you’re probably not going to be a very good painter anyway.