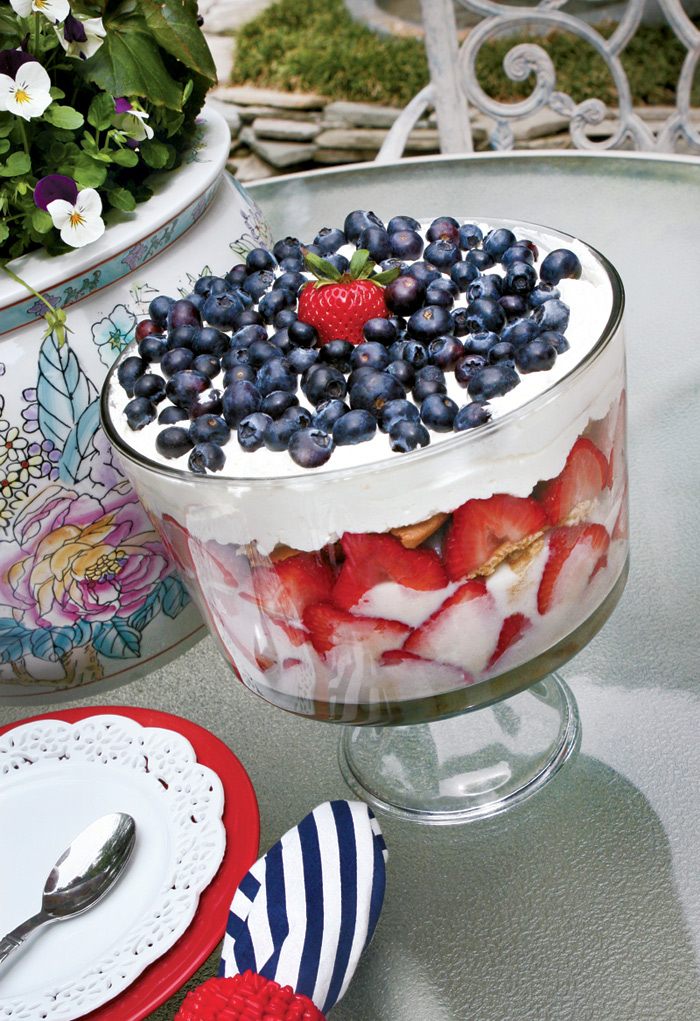 Readers familiar with my recipes know that I always try to take something delicious and seemingly complex and add a twist to make it more approachable.

For this issue, we wanted to stick with the theme of patriotism. For an avid culinarian like myself, this brings to mind family gatherings and remembering our loved ones and those who have served. It usually also involves massive amounts of made-from-scratch food. Some of my favorite childhood memories are of shared meals with each of my four families. Thus, some of my first opportunities to cook were with my parents and grandparents. From this grew my appreciation for artful cooking and presentation.

The trifle I’ve made accomplishes both goals. It presents very well while being manageable enough for even the most novice cook to pull off. The waffles are just sweet enough to not get lost in the midst of the layers of fresh fruit and vanilla pudding. The cool whipped cream adds just a touch of creaminess to this bright delight. Create your own, modify mine, or reproduce this one, as a trifle is sure to impress.

The first portion you’ll need to make is the vanilla pudding. It needs to chill for at least 4 hours before using it in the trifle. Begin by combining 3 tbsp cornstarch, ½ cup sugar, and ¼ tsp salt. Add this mixture to 2 cups cold whole milk, whisking thoroughly to completely dissolve dry ingredients. Cook on medium heat in a small saucepan, whisking to prevent lumps. Remove from heat when bubbles have formed along the edge. Carefully add 1 tsp vanilla and 2 tbsp butter, mixing until fully incorporated. Chill in refrigerator until ready to assemble. Pudding will thicken as it cools.

For the waffles, you’ll need to whip the egg whites until they’re fluffy. Set them aside. Preheat waffle iron. Combine remaining ingredients (2 cups of flour, 1 cup of milk, ½ cup plain yogurt, 2 tbsp sugar, 4 tsp baking powder, ¼ tsp salt, 1 tsp vanilla) and blend well, folding in egg whites slowly once all other ingredients are thoroughly mixed. Pour enough batter on the waffle iron to coat approx 2/3 of the surface. Cook until slightly crisper than normal. The waffles will retain some moisture from wet layers.

While waffles are cooking, prepare the strawberries by removing the stems and slicing to ¼ inch thickness.

Assembly:
Stand strawberry slices around the edge and fill the inside with pieces of waffle. Pour vanilla pudding over waffles to barely cover. Spoon a small layer of whipped cream on top. Repeat this process until you’ve reached the top of your trifle dish or dishes. Finish by topping generously with remaining whipped cream and blueberries. The blueberries, while being scrumptious, add the final touches to this patriotic trifle. Experiment with other combinations as well — I’m sure you will enjoy them all.