A Walk Along Alvord

Albert E. Stokes had a vision. It was 1909, and as the president of Progressive Reality Company, Stokes was attuned to residential development and the changing preferences of the times. On the East Side of Vanderburgh County, just west of Ewing’s Dairy Farm, 80 acres of rural land stretched north to Lincoln Avenue from Washington Avenue. Passersby in horse-drawn carriages — or the new horseless carriages — saw rolling fields. Stokes saw an addition to the city, one that would soon become known as Alvord Boulevard.

The development, originally marketed as Washington Terrace, started in 1911, but by 1914, only seven houses were built. As it turned out, Stokes wasn’t the only developer with a vision, as Bayard Park and Akin Park also competed for Evansville’s upwardly mobile populace. To stand out from the pack, Stokes hired Fred L. Hisgen to market and promote the development. Hisgen planted 350 trees up and down Alvord Boulevard, including the expansive esplanade that is now quintessential to the neighborhood and its identity.

Hisgen also possessed a salesmanship with language befitting the times, utilizing such lines as: “Where Boulevards Meet,” “At the Loop of a City’s Pleasure Pathway,” and “No other spot will be developed with such a flood of private and public enterprise. Will you share in the great profit sure to follow?” Perhaps none was better, however, than Hisgen’s climatic charge to “Get away from the heat and dirt of the city and build in Washington Terrace, where it’s 10 to 15 degrees cooler…”

Home construction picked up after World War I. By the 1940s, most of the development between Washington and Lincoln avenues was complete. Homes were built in the styles of the era. Ranch style homes eventually were constructed along Alvord Boulevard, but not before the Colonial Revival, and English Tudor Cottage style homes that now seem emblematic of the neighborhood. 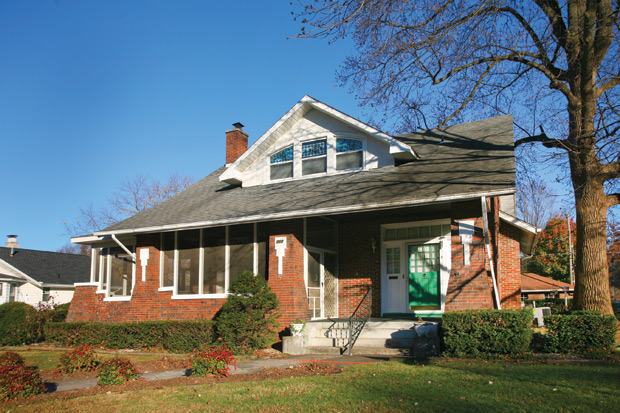 ▲ Since 1975, Sam and Mary Mobley walk the tree-lined boulevard nearly every day to appreciate the landscaping and personality of each home.

For families living on Alvord Boulevard today, a common favorite aspect of the neighborhood is the tree-lined, walkable boulevard, and the variety of architecture. Sam and Mary Mobley first moved to Alvord in 1963, and to their current craftsman bungalow beauty at 712 S. Alvord in 1975. They walk Alvord Boulevard almost every day, and as Sam explains, they appreciate the landscaping and architecture along the way: “Each house has its own personality. We know folks who live in subdivisions where there are only four house types. Here, all the rooflines are different — it’s very nice.” 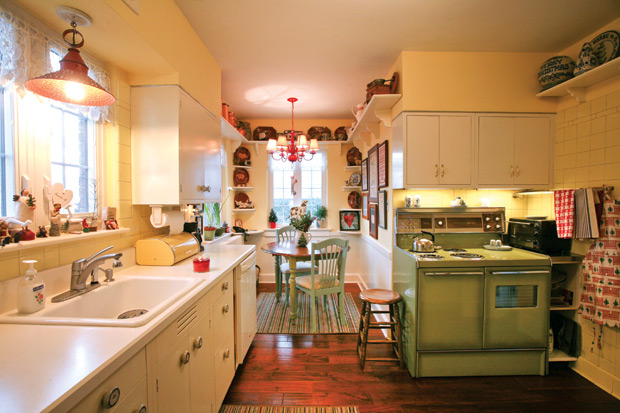 ▲ Sally’s kitchen has a distinct retro flair with pops of color, reflecting the age of the home and her own style.

Sally Lancaster first moved to Alvord in 1977, and to her current terrific English Tudor at 425 S. Alvord in 1999. A self-professed life-long old-house lover, when asked how she shows off her neighborhood to friends and visitors, Lancaster quips: “We take a walk.” 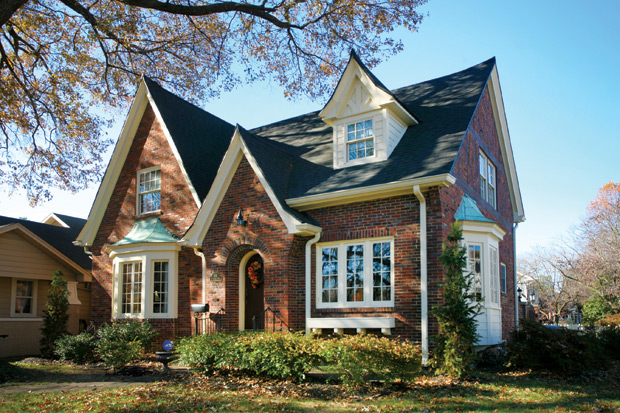 ▲ 801 S. Alvord, designed and built by the Luhring Lumber Company for Mr. and Mrs. Walter Lytle in 1930, currently is owned by Carol Mehling and Don Loehr. Casement windows, a copper roofed bay window, half timbering in the end gable facing Bayard Park Drive, and a very respectful addition to the original attached one-car garage make this house a perfect example of a harmonious blending of old styles with new updates. 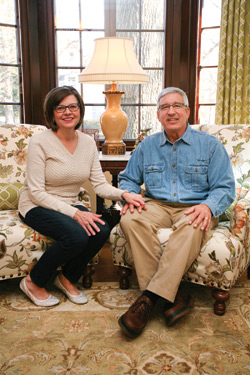 Seeing the recent transformation at 801 S. Alvord by Don Loehr and Carol Mehling truly is inspiring — and a clear reminder that Alvord Boulevard has held on to its value and quality of place for more than 100 years. The W.C. Lytle house was built in 1927 in the English Cottage style by the Luhling Lumber Company, and features a stunning sunken living room looking into the dining room with original sconces and light fixtures, and a metal stair railing with an overlooking landing that creates a castle-like feel for a three-bedroom home. The new kitchen and bath renovation work completed by Don and Carol perfectly place their home in the design sensibilities of quality living in the 21st century, and Don does not hesitate to explain: “After living in a new build, our new home just didn’t feel like a home. This house is so comfortable, and our utilities are less than any new home we’ve lived in. It just has a vibe to it that makes you comfortable, and makes me want to come home every day to see it.”

Asked what their favorite aspect of Alvord Boulevard is, Don and Carol tell of the changing seasons, the holiday decorations, and the diversity of people. “It truly feels like a neighborhood, like a friendly, small town — close to all the city and suburban amenities that Evansville has to offer.” 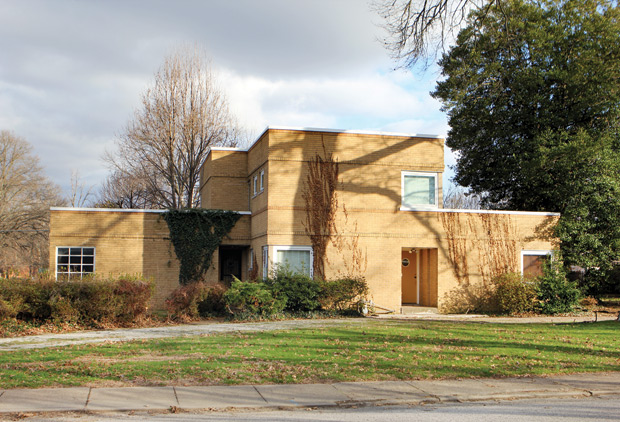 ▲ An architectural style unique to Alvord Boulevard is seen in the home at 950 S. Alvord, built for Louis Amiguet later in 1938. Amiguet traveled the world for Mead Johnson, and selected a style perfect for his travels. The Art Moderne style is distinct from Art Deco, and characteristically embraces curvature to mimic the movement found in the growing automobile age in the 1930s.

Take a stroll along Alvord Boulevard this year in any season, and enjoy one of the best early 20th Century neighborhoods Evansville has to offer. If you look carefully, you’ll see a home that shares the same architectural style as the beloved Greyhound terminal building in Downtown Evansville.