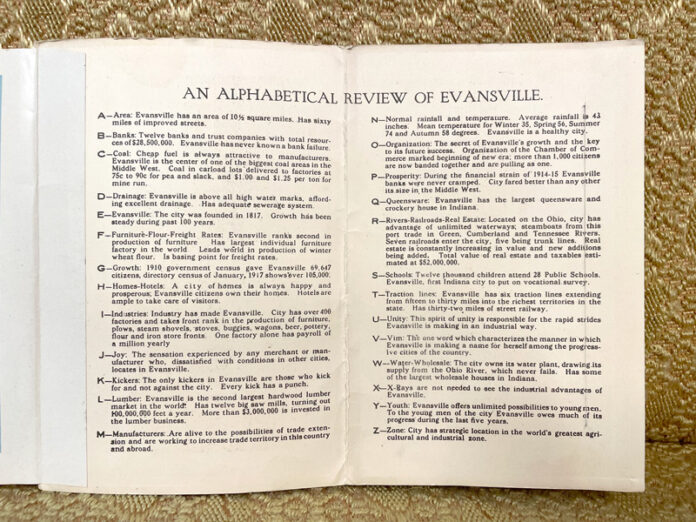 Evansville Living had nearly completed its Insider series “ABCs of Evansville” when local collector Dennis Haire reached out to editor Kristen Tucker. Sharing how much he enjoyed reading about a different letter representing a word associated with Evansville each week, Dennis asked if we had seen an Evansville souvenir booklet from 1917. Filled with beautifully painted scenes from around the city, the booklet concludes with an alphabetical review of Evansville from over a century ago.

Full of fascinating facts about turn-of-the-century industry, finance, and population growth, Evansville’s ABCs from 1917 offer a slice of River City life as the First World War came to a close and new industry was booming.

Here are some highlights from the ABCs of Evansville in 1917:

A is for Area — Evansville had an area of 10.5 square miles.

B is for Banks — 12 banks and trusts worth $28.5 million called Evansville home.

F is for Furniture, Flour, and Freight Rates — With the largest furniture factory in the world, Evansville ranked second in furniture production, was the global leader in winter wheat flour production, and served as the basing point for freight rates.

L is for Lumber — In 1917, Evansville had the world’s second largest hardwood market, with its 12 sawmills producing 100 million feet of lumber annually.

Q is for Queensware — Evansville was home to Indiana’s largest supplier of queensware. It’s believed that the creamware china was part of the inventory at former wholesaler Ichenhauser & Sons, located in the Mackey building on S.W. First Street between Sycamore and Vine.

R is for Rivers, Railroads, and Real Estate — Evansville benefited from transport by land via seven railroads and by water via the Ohio, Green, Cumberland, and Tennessee rivers. Total local real estate value in 1917 was $52 million.

How did our ABCs of Evansville from 2021 compare? Check out our list below and read about the full 1917 Evansville souvenir booklet in the September/October issue of Evansville Living.