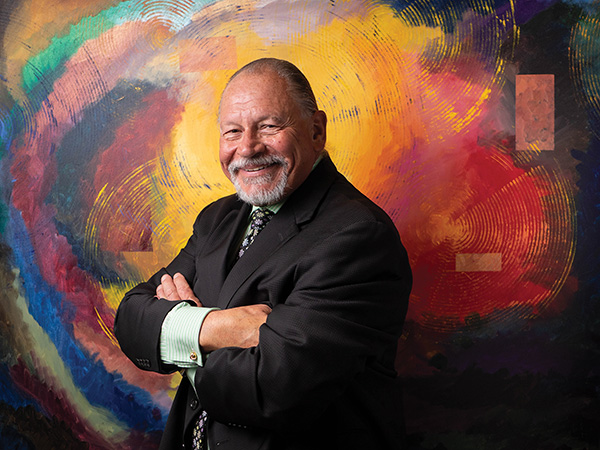 Those were the two options Glenn Grampp set for himself when planning his career after his original goal of being an engineer or an architect fell through.

“I wanted something that would get the adrenaline flowing,” the Evansville native says with a grin. “I’m glad I did what I did.”

Trial law, specifically criminal cases, is where Grampp has thrived in his career and what keeps the adrenaline going for him. Over the last 45 years, it would be hard to say how many cases Grampp has handled, but there certainly have been many high-profile trials he has tallied, including Paul McManus in 2001 (accused of killing his wife and two children) and most recently Terrance Roach (accused of killing Aleah Beckerle).

“In a lot of ways, it really is a lonely profession when you’re a trial lawyer,” he says. “You have the sole responsibility for someone’s future.”

After graduating from Bosse High School in Evansville, Grampp earned a bachelor’s degree from Indiana State University, Terre Haute, Indiana. Choosing to follow a path into law took Grampp to Indiana University’s School of Law in Indianapolis, where he graduated in 1973 with his Juris Doctor degree.

It’s no surprise his career as a trial lawyer began in Indianapolis — after graduation, he took on a job with former U.S. Attorney Phil Melangton at his criminal law firm. It was here Grampp would get his first taste of the profession he would come to enjoy so much.

“Phil did trial work; everyone in his office did some type of criminal work, so I had the opportunity to sit in with Phil and we tried three or four big cases,” he says. “I didn’t want to be in a big firm. I didn’t want to get into government work. Sitting in an office working on something wasn’t what I wanted. I liked doing what Phil did.”

For several years, Grampp continued to learn and work in Indianapolis. But when his mother became ill, he accepted a job offer and moved back to his hometown in 1977. Settling in Evansville brought him opportunities to expand on his expertise in law.

“When I came back to Evansville, most of the experience I had was in criminal trial work in the federal system. But the firm I got in with here did a lot of domestic relations work,” he says. “I did a lot of their trial work, but also wound up in a lot of divorce work.”

Through the course of his career, Grampp became experienced in practicing not just criminal defense and domestic relations, but also in personal injury.

“The thing I personally consider to be challenging is something that presents a legal problem with a legal issue,” he says. “Then you do the research and you solve that problem.”

But law is 99 percent less glamorous than what the general public believes it to be. Criminal work may be Grampp’s favorite to practice, but that does not mean he spends the majority of his time in tense, packed court rooms. Oftentimes, he says, the work is done in his own office through researching and writing.

“Most of what we lawyers do is pretty mundane,” Grampp says. “It’s the usual stuff though; if someone has a problem, you try to solve that problem. Out of a 40-hour workweek, you probably get 39 1/2 hours that are extremely boring. But that other 30 minutes makes it all worthwhile to start the next work week.”

One piece of advice Grampp shares to anyone considering getting into practicing law is to pursue an undergraduate degree in a writing-intensive field, such as journalism, he says. Knowing a little business wouldn’t hurt either.

“Being able to write concisely in a communicative thought is very important,” he explains. “A lot of what you do, even as a trial lawyer, is a lot of writing. I didn’t really figure that out until afterwards.”

For Grampp, what his work always comes back to is the people he defends. And while the adrenaline of working on a criminal case may have been what drew him to the profession, the interaction with people and helping those in need of legal services is what continues to draw him to his office along Fourth Street each day.

“I suppose the thing I thought about the most when going into the practice of law is you gain the average guy a level chance,” says Grampp. “Whether it is a personal injury case or a criminal case, by using the law you can give them the same opportunity a rich man or a big corporation has.

“In the practice of law, no matter what court it is, you have the opportunity to have a fair and level playing field, and I think that’s huge,” he says.

The idea of providing that equal opportunity is what still excites him the most about criminal law, he says.

After 45 years, Grampp is set in his place — no thoughts of becoming a prosecutor or stopping defense work have entered his mind. And while he admits he probably could have made more money or a bigger name for himself if he had continued to practice law in Indianapolis, he has no regrets coming back to Evansville.

“I’ve been very, very happy here. Evansville is my home, and it has a lot to offer if people would just take advantage of it,” says Grampp.

“You know, I enjoy what I do,” he adds with a satisfied smile. “I have fun doing it.”