Thirty years ago, the MotoMart at Burkhart Road and Division Street stood alone in an East Side field. Today, the field and surrounding property in every direction has been replaced with commerce; however, this development might never have existed were it not for the Interstate 69 project.

The tangible evidence of the road is visible from Evansville to Bloomington, Indiana, but there is much intangible evidence of the highway’s value to the area. Is a business able to find a superior candidate with an easy commute from Daviess County? Are suppliers better able to fulfill just-in-time manufacturing needs? Does commerce increase at specialty stores not available in rural areas? Are students heading off to northern colleges and activities now safer?

No one appreciates the expansive benefits of an interstate highway between Evansville and Indianapolis more than the officials who championed the project. With much of Indiana’s work carried out at the State House and in Indy-based associations, Tri-State officials burned up state highways on trips, seeking the safest and most direct route north.

Steve Schaefer recalls multiple trips north in his current role as Evansville Deputy Mayor and former role as executive director of Voices for I-69. Schaefer’s office in the mayor’s suite of the City-County Building is feted with paraphernalia from the I-69 story — a framed copy of the authorizing legislation, Major Moves stickers, photographs of the groundbreaking, and a shiny shovel in a corner.

“The area won’t fully realize the economic and cultural impact of the highway until its completion, possibly a decade away,” says Schaefer.

But he celebrates what already has been gained. He shares a laundry list of benefits including reducing travel time, preventing serious accidents, providing further access, and creating additional connections with communities farther north.

“An exciting aspect of working on this project was that everyone involved saw the greater good,” says Schaefer. “Those officials working on the road project worked together in a spirit of cooperation.” 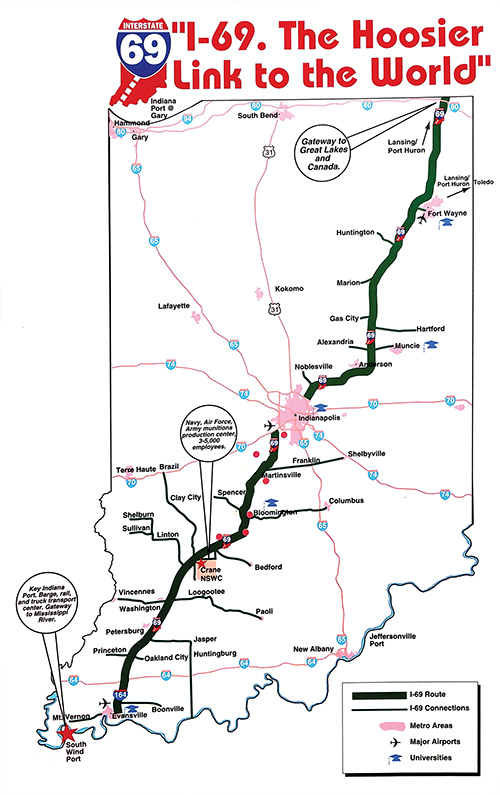 He adds that officials from many different places and levels in government had to work together to accomplish the long-range, difficult goal.

Section 5, an upgrade of State Road 37 from Bloomington to Martinsville, is expected to open to the public in August, according to Scott Manning, Indiana Department of Transportation.

Manning added the final two projects still are in development stage. The last stage between Evansville and Indianapolis, from Martinsville to Interstate 465, is expected to begin design work and land acquisition in 2019 with Martinsville construction starting in 2020.

“This will create a continuous I-69 from Port Huron, Michigan, to Evansville,” says Manning. “The estimated cost of the project is about $1.5 billion.”

The last chapter of the Interstate 69 story (in Indiana) — the Ohio River Crossing bridge — is years away, but Manning notes a Draft Environmental Impact Statement (DEIS) is ongoing, with a record of decision and final environmental impact statement expected in fall 2019. The DEIS is mandated under the National Environmental Policy Act (NEPA). Large federally funded projects, like the crossing between Indiana and Kentucky, require extensive study in the areas of field work, engineering, and traffic forecasting, as well as the consequences to the natural world.

“Positioning Evansville and other southwest Indiana communities on a major commerce corridor that connects three counties has tremendous potential to bring new business to the region and provide options for existing businesses to grow and create jobs,” says Manning.

Former Evansville Convention and Visitor’s Bureau executive director Bob Warren, who in his position at the CVB saw the changes first hand, adds how the project has expanded the convention business for the region. 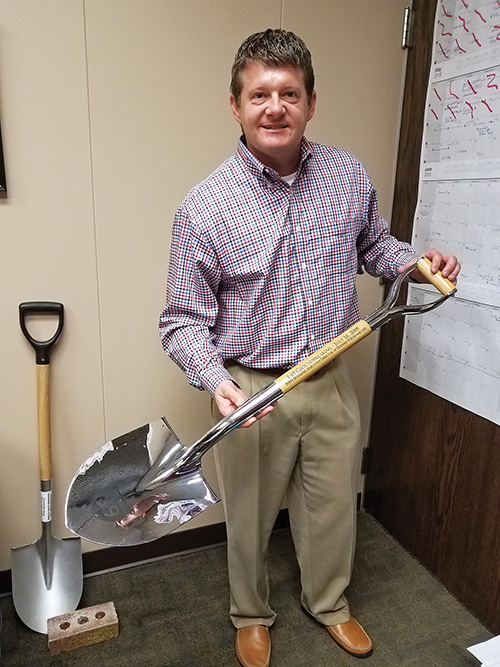 “When the Executive Inn closed in 2009, we were basically out of the convention business,” he says. “Now we have a Downtown convention center hotel, and we also have made improvements to the Old National Bank Plaza.”

Warren adds these improvements strengthen the region’s draw for large meetings — currently there are 75 conventions planned for 2018 alone.

Warren noted the CVB’s goal is to generate $7 million-worth of loading on an annual basis and another $6 or $7 million in goods and services sold to conventioneers while in Evansville.

The CVB works with approximately 250 state associations in Indianapolis, he explains, and that is the target for bringing conventions to Evansville.

“The new road makes it so much easier for us to host a meeting in Evansville,” says Warren. “Because many organizations work on a three-year cycle with meetings, we are just now seeing the benefit of the completed sections.”

Since the first sections of the road opened in 2012, I-69 still is early in its lifecycle as a road; but INDOT anticipates continued maintenance to keep the road in top shape. In 2019, sections 1, 2, and 3 will undergo pavement maintenance. Bridges and pavement on the old I-164 portion of I-69 in Vanderburgh County also will undergo maintenance in the next few years, according to INDOT.

“We see the road as a physical catalyst for transforming southwest Indiana with a focus on regional thinking,” says Manning. “Momentum from building I-69 has sparked communities in the region to begin working more closely together on initiatives to attract job creators and bring talent to the region. Coalitions have been formed to foster partnerships and encourage innovation.”