All Roads Lead to Bargetown 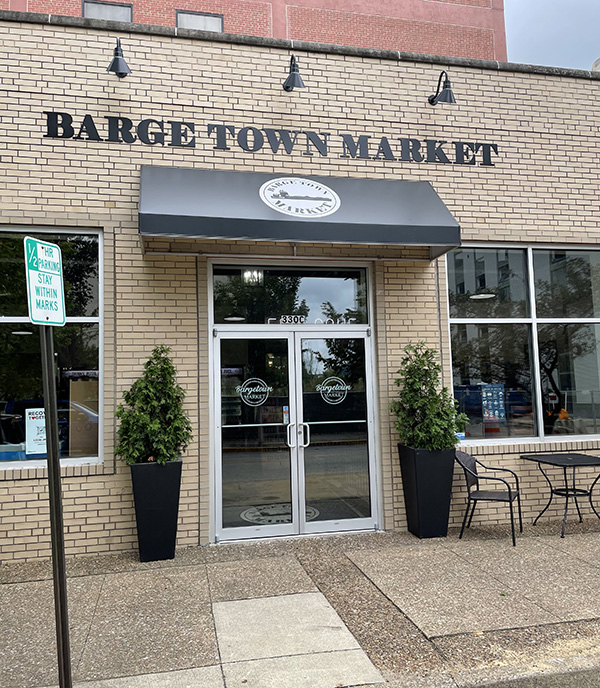 Main Street in Downtown Evansville is a bustling line of businesses that for many years has lacked a basic amenity for visitors and residents alike. Since opening in October 2020, Bargetown Market has filled that gap.

The market’s tan brick storefront, tucked behind the Jimmy John’s at 330 Main St., opens onto Fourth Street. Inside, high shelves are stocked with snacks, candy, grocery items, and basic pharmacy products. An array of drinks chill in a wall of coolers, while local and national beer brands pile high in the beer cave. On the way to the counter and flanked by a towering wall of wine, several wooden displays and open coolers carry local products and homemade dishes.

Newburgh resident and owner Ken Butler, who also owns 12 Jimmy John’s in four states including the Main Street location, spent a lot of time at the restaurant at the start of the COVID-19 pandemic. With the surrounding restaurants, offices, and boutiques dark and the streets empty, he noticed a hole in Downtown Evansville’s food landscape.

“He started thinking (about) everybody Downtown — they have to go to the West Side, to the East Side to go to a grocery store,” says marketing manager Andrew West. “Idle hands are the devil’s plaything, and so he found a way to spend his idle time, and then it became this. The ultimate goal is to have a lot of locally produced or in-state produced products.” With the goal of a true local market in mind, Butler’s partner Alicia Rupert created signature, homemade soups, salads, fruit cups, chicken salad, and more that are made fresh daily and often sell out after the Downtown workforce’s lunch hour. Rupert also provided the inspiration for Bargetown’s brand — a tribute to its namesake market, owned by Rupert’s grandparents at the corner of Southeast Second and Oak streets in Haynie’s Corner in the 1980s. That location is now the site of Madeleine’s Fusion Restaurant.

Steak Dance seasoning made by Grauer Family Foods was the first local product available at Bargetown, with Cheshire Curiosities microgreens and Haubstadt-based Dewig Meats following close behind. Oliver Winery based in Bloomington, Indiana, and Evansville’s Carson’s Brewery also have products in the market.

“When we mean local, we want to start in Evansville first and then move it out,” says West. “It was a transition because when we first opened, we learned as we went (that) a lot of distributors don’t want to work with you until you’ve been open a while, so we had to find a distributor that could just fill the shelves.” Opening amid COVID-19 and experiencing a lengthened timeline for local products haven’t hindered Bargetown’s success. Even the shop’s soft opening turned into a full-blown grand opening after so many people attended in response to the Downtown Economic Improvement District’s Facebook post about the event.

One of the community’s best responses has not been to the products Bargetown does carry, but the products it doesn’t. The market allows customers to request snacks, beers, coffee machines, and more, and keeps a running wish list that it tries its best to fulfill.

“That’s one of the biggest things — we want a completely open flow of communication with the community,” says West. “We’re here for the people of Downtown. I think that’s one of the things that sets us apart too from bigger convenience stores is you come in and ask us to get something in. We’ll get it in for you, or the closest thing we can find to it.”