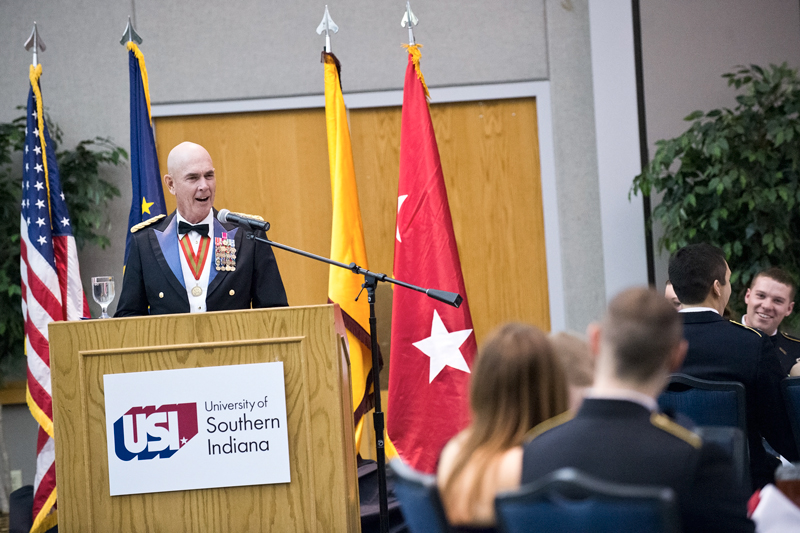 When you’re a civilian, you’re aware of the discipline involved in being a soldier. But you don’t usually get to be part of the pomp and circumstance — every step, every march, every lifting of the flag, and every precise movement, in perfect order. I had that chance.

The Army Reserve Officers Training Corps Dining Out was presented by the Wabash Battalion Eagle Detachment. It honored the cadets who are graduating from ROTC programs from Rose-Hulman, DePauw, Saint Mary-of-the-Woods, Indiana State University, and the University of Southern Indiana. That’s where the banquet was held on March 2 as jazzy, 1940s-style music played in the background.

A reception line of uniformed soldiers greeted guests at Carter Hall. It was an impressive sight — the cadets and their dates, in formal gowns, walking through the line of soldiers with raised swords. When everyone reached their assigned tables, it was announced: “Gentlemen, seat your ladies.” I felt honored to be amongst all these extraordinary cadets. The toasts seemed very important. We lifted glasses to the United States, our commander in chief, the United States Army, the cadets, and fallen comrades.

I was especially touched by the POW/MIA empty chair ceremony, honoring the prisoners of wars and missing in action who were notably absent. The table, set for one, symbolized the frailty of one prisoner, alone against his or her oppressors. It is white, symbolizing the purity of his or her intentions. The red ribbon on the vase represented ribbons worn on the lapels of thousands who demand a proper account of our comrades who are not among us. The single rose signifies the families and loved ones of the missing who eagerly await their return. The slice of lemon on the bread plate reminds us of the bitter fate of those captured and missing in a foreign land. The salt sprinkled on the plate signifies the tears of the missing one’s family and friends. The glass is inverted because those missing cannot toast with us. These are the types of details that are outlined in the military’s Committee Planning Guide for conducting Dining In and Dining Out events.

Major General Joseph L. Culver, who assumed duty as commander of the 38th Infantry Division on Oct. 1, 2001, was the guest speaker. He is a career National Guardsman who has served at both the enlisted and officer levels. When asked what Culver’s speech meant to him, Cadet John Rogers said: “He challenged cadets to be good leaders. He said that we must always be experts and professionals, as is stated in the Soldier’s Creed.

After finding myself surrounded by these fine young people who represent our military, it made me realize that being a good soldier is more than wearing a uniform or going off to fight. It made me feel patriotic, proud, and safe.