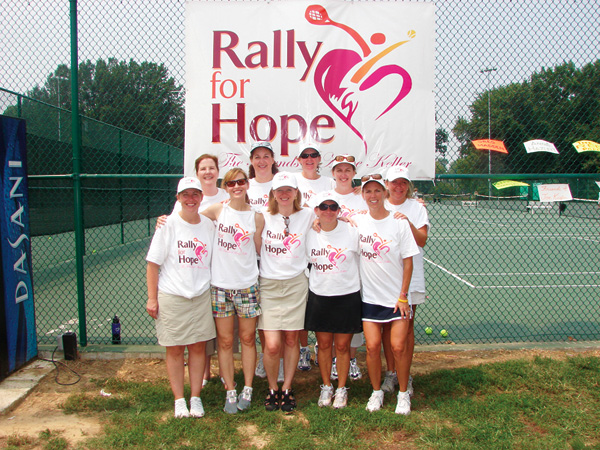 Four years ago, an estimated 13,000 Hoosiers died of cancer. One was Evansville native Anne Keller. Her death came after a nine-year fight with liposarcoma, a rare, malignant tumor. Friends say the 39-year-old Keller was joyful, kind, and compassionate, and in her honor, they created “Rally for Hope.”

The August 7 event, held at Wesselman Park, raises money for the Evansville Community Tennis Association (ECTA). The previous three events, in which people play in a round robin tournament or simply watch skilled players, have raised more than $15,000 for the ECTA’s promotion of inner-city junior tennis development.

The gift is appropriate: Keller, who played tennis for Memorial High School, worked as a nurse practitioner at a Chicago inner-city clinic. (For the 2009 season, Keller’s friends covered Wesselman’s court rental fees for Memorial’s teams.) “She lived her life like she played tennis,” says Amy Ziemer Ryan, the event’s chairwoman and Keller’s longtime friend. “She always played within herself, never drawing attention to herself, but always moving forward, complementing everyone else.”