Through the spring of 2015, those traveling near Raben Tires’ Downtown location may have noticed a transformation occurring on Fourth Street. As the days grew longer, the former Scotsman building — once the ice company’s office — began to take on a different look, thanks to its new owner Philip Alvey.

“When I looked at it, I made an offer that day,” says Alvey, who is a native of Henderson, Kentucky, and works as a safety director at Rhino Pennyrile Energy in Calhoun, Kentucky. “I first saw the advertisement for it in the fall of 2013 and thought it was a cool place.”

Alvey had been searching for a former fire station to renovate and convert into a home on and off for the last 15 years. Before moving back to Henderson in 2009, he scouted buildings in the Nashville, Tennessee, area. After returning to his hometown, his search included New Harmony, Boonville, and Newburgh, Indiana, before he found a listing for the Scotsman building. 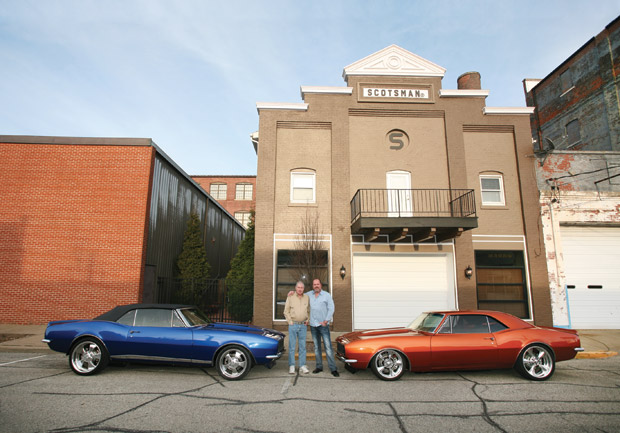 ▲ Father and son Wayne and Philip Alvey have worked together on restoring cars and homes since Philip was 14 years old. Their first project was the blue 1967 Chevy Camaro pictured here. They also have renovated three houses and worked together on Philip’s new home, the Scotsman building on Fourth Street in Downtown Evansville.

“I always liked old fire stations and this building resembled one. I also liked the location of this one,” he says. “I liked the character of the building, too. It’s got a really great front presence to it.” 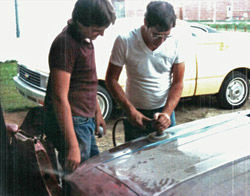 Built in 1869, the Scotsman was certified as a historic location in 1982. Sandy Sanderson converted the upstairs of the building into a living space in the 1960s, says Alvey. Kenneth Butler, owner of Jimmy John’s restaurants in Evansville, Owensboro, Kentucky, and Carbondale, Illinois, owned the building before Alvey, and rented the upstairs space as an apartment.

“It’s unique, there’s nothing like this around here,” says Alvey. “I wanted to live Downtown, but I just really didn’t want to do the condos. This is perfect for my needs.”

Alvey is no stranger to renovations and rebuilds. Growing up in Henderson, his love of remodeling started when he was 14 years old. It was at that time he and his father Wayne Alvey began to restore their first car together, a 1967 Chevrolet Camaro.

The pair has restored the Camaro twice since they purchased the car. The first restoration 32 years ago took six months and was the start of many projects for them, says Philip.

“We’ve done cars together my whole life,” he says. “We’ve rebuilt cars and renovated three houses together. Two of the houses my mom Janet was really involved in as well.”

Philip and Wayne added home renovations to their projects while Philip was living in Springhill, Tennessee.

“I bought a house … and there was just a lot of things that I wanted to do to it. It was a newer house; I just wasn’t happy with it,” he says.

They also completed a renovation to a 1950s home in Henderson in 2009, updating the interior to a more modern look with improvements to the kitchen, bathrooms, and floors, as well as additions of crown molding in the home.

“Dad’s really my best friend; both my mom and dad are,” says Philip. “Mom’s always been real supportive of our projects and enjoyed us staying close and doing things together.”

It’s that close relationship with his parents that pushed him to move back to the Tri-State from Springhill seven years ago. After spending 18 years in the auto industry, Philip moved back to Henderson and began working in the coal industry. When he purchased the Scotsman, it only made sense to complete the project with his father.

Philip began renovating the Scotsman in September 2014 before he closed on the property with his real estate agent Mary McCarthy with F.C. Tucker Emge Realtors. The long hours of work paid off and 10 months later, he was able to move in just before the Fourth of July 2015.

“There were actually no surprises, amazingly, for a 146-year-old building. I was fortunate to tackle it and not come into something major (to fix),” says Philip. “This building has been very well kept through the years, it’s never been abused or neglected.” 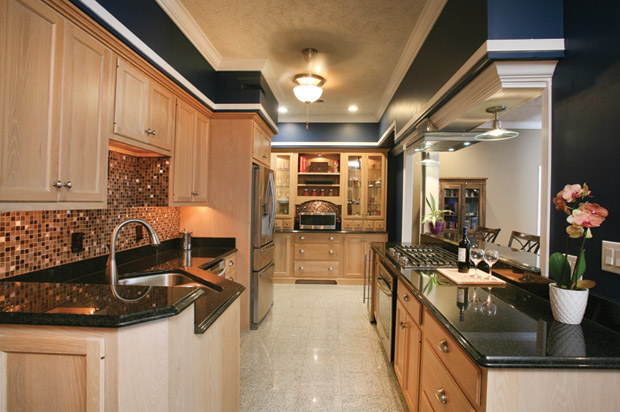 ▲ The kitchen of the home underwent the biggest change, says Philip. He and his father gutted the old kitchen and refurnished it with brand new trim, appliances, cabinetry, and a colorful back splash behind the sink and microwave. 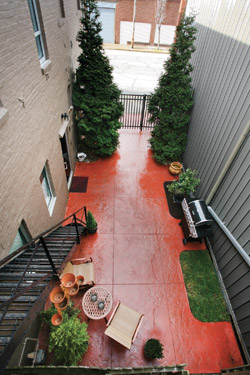 Walking through the gate of the small courtyard next to the building offers a unique addition to the Downtown setting — a private yard area. A red stone patio with small flowerbeds laid in appear behind two large Emerald Green Arborvitae trees, which give Philip privacy. Beyond that, a grassy lawn offers Philip’s dog Cooper a place to play.

“I love the little courtyard downstairs. I like sitting down there … it’s a great area for the dog to play in,” he says. “That’s something that you really don’t get Downtown, a green space.”

A set of fire escape stairs leads up to a patio and the entrance of the second-floor home. The space is around 2,300 square feet, says Philip, and has a very open floor plan. When he began work, he says he knew he wanted to use neutral colors, with blues in the bathrooms, dark floors, and white trims. The kitchen, which he and his father completely tore out and started from scratch on, features new tile floors, dark granite counter tops, rebuilt cabinetry, and new appliances. The walls behind the sink and the microwave feature neutral-toned, tile backsplashes as well.

“Kitchen and tile work is probably my favorite work to do,” says Philip. “The kitchen was the most fun to redo.”

There are a few unique features original to the space that Philip left in during the renovation, including two built-in shelving areas — one in the dining room and the other in the master bedroom — and an intercom system.

The master bedroom includes a fireplace, a feature already installed in the room, and connects to the master bathroom, showcasing a large bathtub and a step-down shower. The second bedroom at the front of the building has its own walk-in closet and a balcony looking out over Fourth Street and the Evansville skyline toward the riverfront.

While Philip and his father did the majority of the renovation, he says they did have some help on a few aspects of the building. A&S Construction helped Philip replace the garage door and windows on the first floor. Brent Graeter of Graeter Construction was responsible for the new paint job on the Scotsman and other remodeling of the front of the building. Philip’s good friend Aaron Grubb of A&S Construction came in to help with the crown molding in the home.

After a year of work, Philip says there is very little to be finished on his new home. The bottom floor he plans to finish out into an area for social gatherings, which he hopes to have ready by spring. Looking around the home, he says he’s very proud of the work he and his father did to complete the space.

“It’s a big transformation from what it originally looked like,” says Philip. “I’m very proud of this place. I’m proud people noticed me and my dad’s hard work.”