Memphis can keep its pit-smoked barbecue with the thin tangy sauce. Kansas City, there’s no need to export yours, smoked over hickory and covered with a molasses and tomato sauce. And Texas, your brisket, tasty as it is, is beef, and while we eat our share here, our barbecue book says barbecue is pork. In Evansville, our barbecue joints don’t have to adhere to century-old traditions defining their craft; pit masters have the freedom to create their own brand of barbecue. Here’s your guide to the grilled, the smoked, and the saucy in the River City.

In the world of barbecue, dishes can be all about the sauce. But at Wilson’s General Store & Café, it’s also about the rub. “We use a rub on all our meat when we send it out to the table,” says owner Tim Wilson of the spice mixture that sells in many stores along with the Wilson’s barbecue sauce — a sweet, tomato-based recipe. Wilson’s originally opened in 1995 in New Harmony, Indiana, but relocated to Broadway Avenue in Evansville two years after a fire in 2006. While Wilson’s ribs are the restaurant’s No. 1 choice among loyal customers (Wilson serves ribs, pulled pork, pork loin, turkey, chicken, brisket, and ham) Wilson also recommends the namesake Wilson’s BBQ Burger. A half-pound burger with bacon and cheddar cheese, the sandwich is topped off with a generous portion of the smoked pork and a dose of the Wilson barbecue sauce. Complete your meal with the restaurant’s popular chili, loaded baked potato, or a number of other classic side dishes.
11120 Broadway Ave., 812-985-0202, wilsonsribs.biz 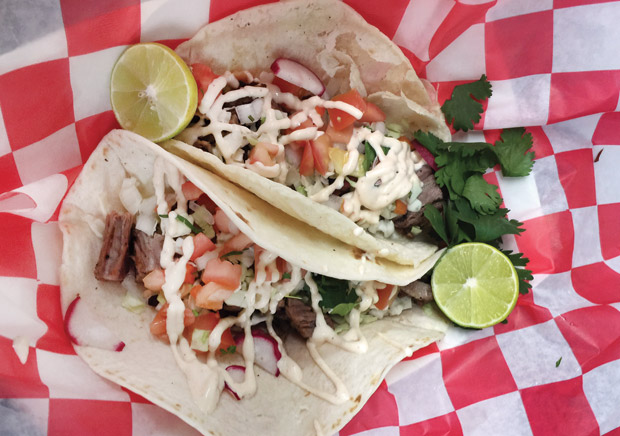 Chris Mills isn’t the pitmaster of a traditional barbecue joint. Instead, Mills smokes his pigs in the back of a truck. Flying Pigs Barbecue is part food truck and part championship barbecue competition team. Between serving up pulled pork at the Downtown Evansville Farmers Market and testing new creations like lightly smoked cedar planked cheddar mashed potatoes, Flying Pigs enters competitions and has found success with its award-winning whole hog. After finding a place around town to set up shop, the truck serves up a rotating menu that includes items like Pig Carnitas — pulled pork, cabbage, pico, radishes, and cilantro stuffed into a flour tortilla topped with chipotle crema — and the Haystack, pulled pork, beans, and nacho cheese sauce piled atop tortilla chips with jalapenos.
812-568-5374, visit Flying Pigs Barbecue’s Facebook page 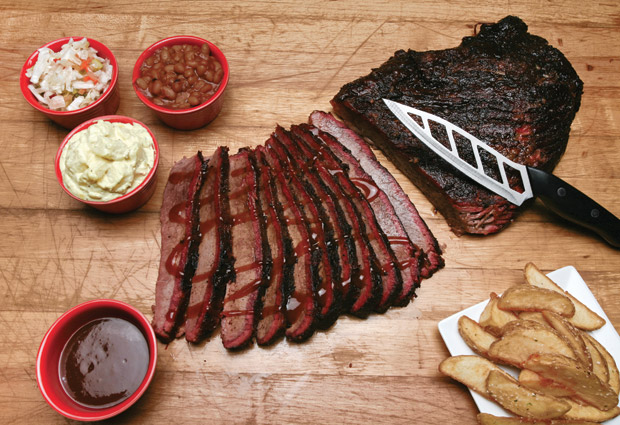 The Hickory Pit Stop Championship BBQ, originally known as Jim & Joe’s, is entering its fourth generation of operation with the Ellison family. Hickory Pit Stop, which opened in 1957, uses its original brick pit, which produces mouth-watering dishes such as The Big Bama, a half-pound pork sandwich topped with the award-winning Hot & Heavy BBQ Sauce, and a bag of chips, or The Robert E. Lee, a half-pound of pork and a half-pound of hickory smoked ribs served with pickle, onion, rye bread, and a side order. The restaurant, located across from Bosse Field, is known for its successful competition barbecue team since 1999 — and its homage to University of Alabama football.
1521 N. Main St., 812-422-6919, hickorypitstop.com

Carne Asada pulls double-duty as both the name of a local barbecue joint and a description of the grub they dish up. In Latin America, carne asada is grilled beef that’s served in slices and cooked to achieve a charred flavor. At Carne Asada, it takes 24 hours to prep their famous brisket before it undergoes 22 hours of slow cooking over indirect heat, smoking, seasoning, and basting. The whole brisket is then cut into slices so that all four edges can be seasoned and the ends can be charred. Paired with the restaurant’s house-made barbecue sauce, a 100-year-old recipe, and sides like Texas caviar (black-eyed peas, bell peppers, celery, parsley, and a hint of jalapeno), Carne Asada “cooks with the flavor of fire.” The restaurant puts its unique spin on barbecue by using La Caja China — a charcoal heated Cuban-style roasting box — and by brining chicken and grilling it on beer cans.
1354 E. Division St., 812-459-5556 or 812-455-4210, visit Carne Asada’s Facebook page 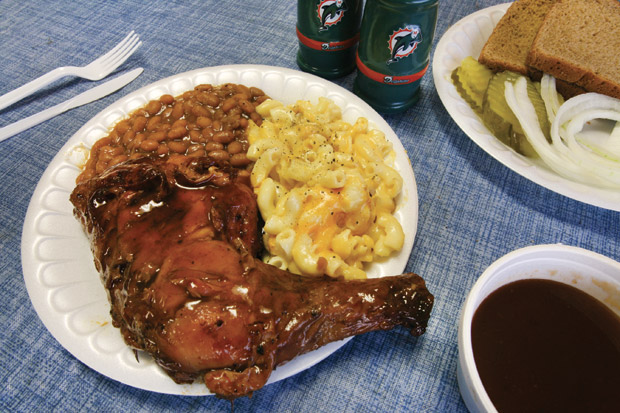 When Frank Patton Jr. worked second shift at Berry Plastics, he spent a lot of time cooking barbecue outside. After hearing repeatedly “This will sell,” Patton took his friends’ advice and in 2000 opened Frank Jr.’s Barbecue, 3012 Covert Ave. Ste. F. In 2014, the restaurant transitioned to focus on catering and carryout barbecue only. Customers can pick up carryout meals noon to 6 p.m. Fridays and Saturdays while catering is offered seven days a week. “My barbecue is a backyard barbecue-style. I do all my cooking outside. I have a homemade sauce I’ve made for about 20 years. It’s thin, not sweet; it’s a little vinegary, but I couldn’t give you a recipe.” Patton says he had a mentor tell him to take everything out of your cabinets and the final product is your sauce. A lot of his recipe comes from his uncle Charles Patton Sr. Whatever the ingredients are, we can attest — Frank Jr.’s Barbecue’s sauce is outstanding. Try it on his pulled pork, cooked using hickory wood, and paired with his macaroni and cheese, which uses “five different cheeses and is baked real slow.” After dinner, have a slice of Patton’s grandmother’s recipe chess pie.
3012 Covert Ave. Ste. F, 812-475-9880

Slow-cooked barbecue is worth the wait, and Shyler’s owner Randy Sheffer says the new restaurant will be as well. In December 2012, Shyler’s previous location caught fire and the long process to reopen began. The restaurant reopened in March at 5416 E. Indiana St. and features much of its old menu and beloved barbecue recipes of the past. Famous for its giant baked potatoes, the restaurant puts its own spin on barbecue with its secret recipe sauces. The new location will be focused on a family-friendly sports bar environment with 14 widescreen TVs, arcade games, and a private dining area. Shyler’s aims to serve everyone from the youngest barbecue lovers to coworkers at a casual lunch party looking to get out of the office.
5416 E. Indiana St., visit its Facebook page

Known for being a premier catering service in the Evansville area for more than 50 years, Marx BBQ has a restaurant menu that includes daily specials for those looking for barbecue outside of event season. With original and in-demand sauces like its Sweet & Sassy BBQ Sauce, Marx bottles and sells them in their restaurant. In business since 1955 and started by two brothers, the restaurant specializes in barbecue ribs, chicken, and pork, and still uses the unique recipes created by its founders.
3119 W. Maryland St, 812-425-1616, marxbbq.com 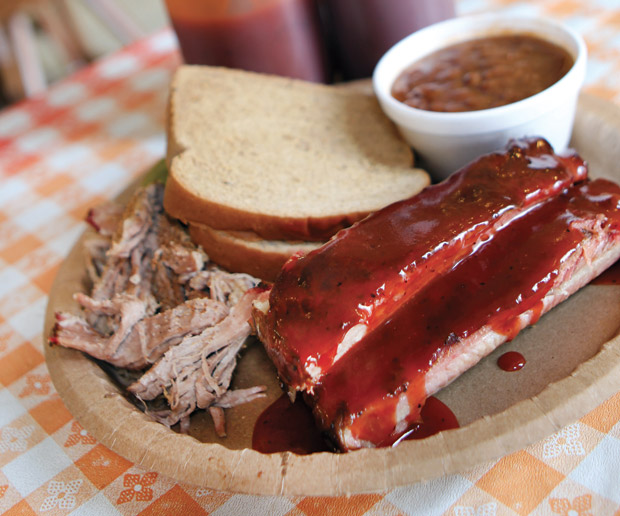 If you’re having trouble deciding between The Bar-B-Q-Barn’s homemade sauce options (the sweet ‘n’ tangy or vinegar barbecue), don’t forget there’s a third option. Because the meat is slow cooked for 17 hours over hickory wood, it’s so tender you can choose to go without. The Bar-B-Q Barn was opened in June 2006 by Mark and Bill Corbett, and was purchased by Owensboro, Kentucky, resident Mauricio Calderon two years ago. Calderon says the restaurant’s most popular dish is the Pulled Pork N’ Sauce Platter, served with rye or white bread, pickle, onion, and your choice of two sides such as French fries, American potato salad, BBQ baked beans, and more.
1003 E. Diamond Ave., 812-491-9868, visit its Facebook page 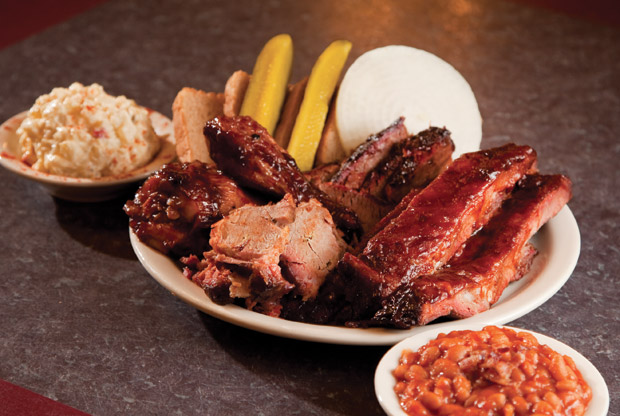 For nearly nine decades, Evansville residents — and even actors like Tom Hanks during the filming of “A League of Their Own”  — looking to get their Southern-style barbeque fix have visited Wolf’s Bar-B-Q. The family-owned restaurant first opened for business in 1927 as a wholesale meat distributor. When it comes to sauce, Wolf’s isn’t a sheep. Known for its signature tomato-based sauce, the business bottles its own brand. “It’s not heavy in spices or smoke flavors that take away from the meat,” says Terry Wolf, a third generation who co-owns the restaurant with his sister Kim Wolf. Regulars come for the pork ribs, slow-cooked and finished with Wolf’s baby back Bar-B-Q sauce, and signature American potato salad, and stay for the secret recipe coconut crème pie that was created by the second generation of Wolfs. All of the items on the restaurant’s expanding menu are made with fresh, premium ingredients. “Better ingredients makes better products, and we practice that every day,” says Terry.
6600 N. First Ave., 812-424-8891, wolfsbarbq.com