Away in a Manger 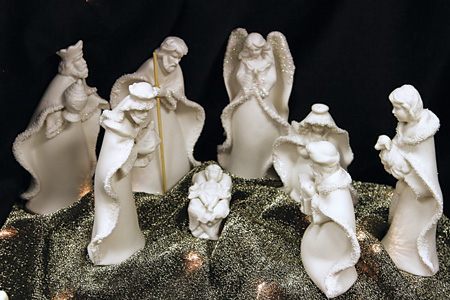 In a nativity scene, the pieces are always the same: Mary, Joseph, and baby Jesus in a manger. The same scene depicts the same holiday, Christmas, every December, but as members of the Church of Jesus Christ of Latter-day Saints discovered in 2003, so many different expressions of that religious scene exist.

Inspired, a group of church volunteers asked members of the church congregation to loan nativities, also known as crèches. They wanted to create a crèche showcase for the holiday season. Thus, “Joy to the World,” a crèche exhibit, became an annual tradition at the church.

Eight years later, the free event — open to the public — has grown from 100 crèches on display to more than 500.

Organizers such as Brooke Monroe divide the numerous nativities into categories such as children’s crèches, international nativities, or traditional scenes. Monroe is the public affairs director for the Evansville stake, a group of Mormon congregations in Southwestern Indiana. “One of the reasons I love the crèche exhibit,” says Monroe, “is because it brings the focus of Christmas back where it was meant to be — on the savior Jesus Christ.”

The idea of the two-day festivity in December is to let visitors wander. They admire unique details on various pieces such as the hand-crafted crèches made of olive wood from Jerusalem. While they walk, a number of musical acts perform holiday tunes. For Steve Stanfill, president of the Evansville stake, the displays bring people together. The pieces, he says, “cross so many cultural boundaries.”