Back to the Basics

I had visited Fredericksburg, Texas, before and vowed to return. The town of 10,829 just north of San Antonio and Austin has more than 400 B&Bs, guest houses, and inns; two dozen wineries; 80 restaurants; an airport for private aircraft, with an onsite hotel (I enjoyed staying there!); and shopping galore along the town’s beautiful wide streets lined with historic commercial buildings. Visiting Fredericksburg again was an easy sell. When I learned the itinerary included trips to Lyndon B. Johnson’s ranch, the Texas White House, and to Luckenbach, Texas, I quickly reserved my space.

Fredericksburg was founded by German immigrants seeking a new life of economic opportunity and political freedom in the Republic of Texas. The idea of German immigration was promoted by Adelsverein, a society of German nobility led by Archduke Adolph of Nassau incorporated in 1842. However, by the time the immigrants began to arrive at Galveston, Texas no longer was a republic but a state. The group failed to negotiate for the promised land near the coast. Instead, for the society’s first colony, they purchased land far inland in 1844 between the Llano and Colorado rivers in hostile Comanche territory. Fredericksburg would become the second colony established by Adelsverein after John O. Meusebach purchased 11,000 acres of land along the Pedernales River in 1845. 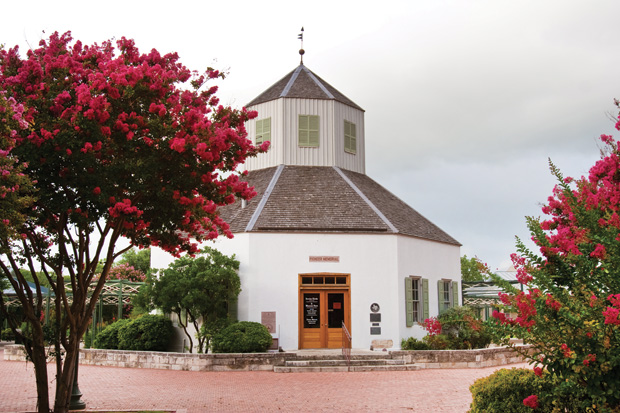 ▲ The heart of Fredericksburg, Texas, is its German heritage, seen in the Marktplatz where the Vereins Kirche, or People’s Church (dating to 1847 and rebuilt in 1936), stands along with the Maibaum (Maypole) illustrating the town’s history, below right. Photos by Steve Rawls and C. Barrington. 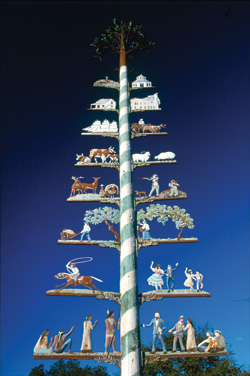 The journey to Texas was arduous — a long sea voyage followed by a grueling trek into the Texas interior. The first settlers of the Adelsverein colonies, 120 immigrants, arrived to the Texas Hill Country from Prussia and Nassau in 1844. Two years later on May 8, 1846, Fredericksburg was founded. This story of these pioneers can be experienced by a stroll through the Der Stadt Friedhof, the city cemetery, established the year of their arrival.

“The history of Fredericksburg and the Texas Hill Country is evident in the architecture, the festivals, the music, the historic sites, and the cuisine of our area,” says Ernie Loeffler, president and CEO of the Fredericksburg Convention and Visitor Bureau. “What you see architecturally in the downtown national historic district is what the German settlers created on the isolated frontier of Texas.”

Visitors to Fredericksburg should begin their orientation to the town with a stop at the Vereins Kirche Museum, Fredericksburg’s most iconic structure located in the Marktplatz on Main Street. Inside this “Society Church” is a collection of artifacts and photos depicting Fredericksburg’s history. The original building was demolished in 1896 but rebuilt in 1935 as a pioneer memorial. Also on the site is the town’s Maibaum (Maypole), erected in 1991 to symbolize the history of Fredericksburg. 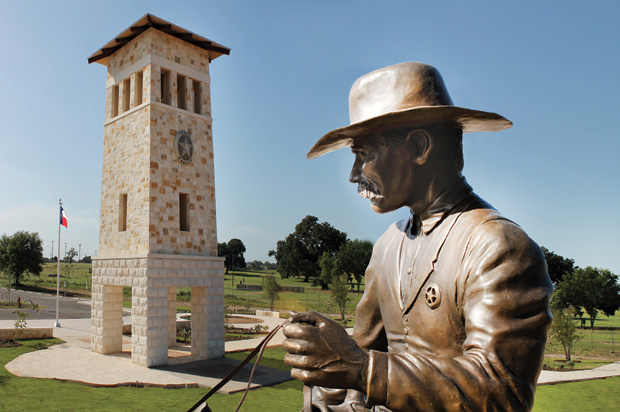 “Our museums and historic sites cover a wide range of history — from the Native Americans who frequented Enchanted Rock some 10,000 years ago to the German settlers who arrived in 1845 to the Army troops who were first stationed at Fort Martin Scott in 1848 to the Texas Rangers, the oldest law enforcement group in the State of Texas,” says Leoffler. “On the national and international stage, the Lyndon B. Johnson State and National Historical Parks explain the national legacy of LBJ in education and civil rights, while the National Museum of the Pacific War brings to life the battles of the Pacific in World War II under Fleet Admiral Chester W. Nimitz — a hometown hero.”

(Nimitz succeeded Admiral Husband E. Kimmel as Commander in Chief of the U.S. Pacific Fleet in World War II. Kimmel, a native of Henderson, Kentucky, was removed from the position and demoted after the December 1941 attack on Pearl Harbor, Hawaii. As Kimmel’s family has worked to restore his rank, the city of Henderson, Kentucky, unveiled a bronze statue of Kimmel last December.) 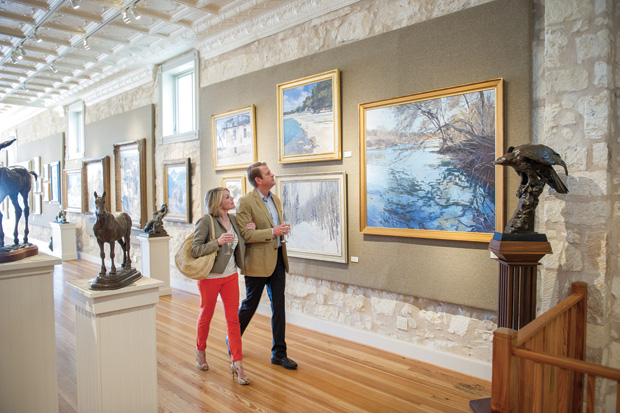 ▲ Visitors to Fredericksburg will find galleries galore, including the InSight Gallery located in a historic building on West Main Street. Photo by Blake Mistich.

“The appeal of Fredericksburg goes beyond the fascinating history of the area and its people,” adds Loeffler. “Outdoor recreation like hiking and bicycling, more than 30 wineries offering some of the finest wines in Texas, outstanding art galleries featuring the works of national and internationally renowned artists, live Texas music every day of the week at Luckenbach, Texas, and fabulous shops offering everything from home décor to fashion for men and women. And end your day with an amazing dinner at one of our farm-to-table restaurants.” 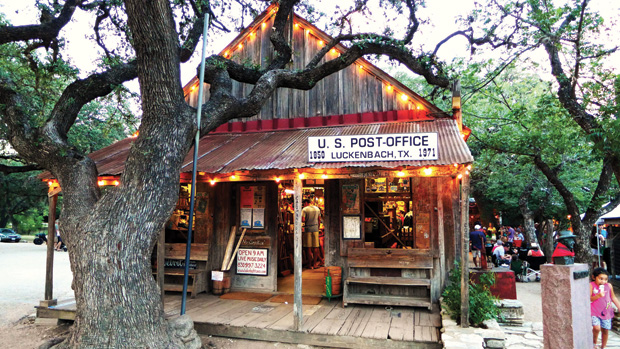 ▲ Buy some boots and faded jeans and hit the road to Luckenbach, Texas, where everybody is somebody and “ain’t nobody feeling no pain.” Luckenbach is a real (tiny) town near Fredericksburg that should be on your must-visit list in Texas Hill Country. Photo by Julia Ermlich.

People of at least a certain age know Luckenbach, Texas, through the 1977 Waylon Jennings and Willie Nelson song, “Back to the Basics of Love” (written by Bobby Emmons and Chips Moman). The lyrics suggest the “high society” couple should get back to the basics and “go to Luckenbach, Texas, with Willie and Waylon and the boys.”

Luckenbach, with one general store and a population of eight, has been around since 1849, but its era of fame began in 1970, when the town’s owners placed an ad in a local paper:  “Town for Sale – Lock, Stock, and Dancehall.” The town was purchased by a collection of what has been described as only-in-Texas characters led by Hondo Crouch, a local who was an All-American swimmer at the University of Texas in 1941. Crouch declared everybody was somebody in Luckenbach. Today the town has a post office but no permanent residents, just the honky-tonkiest of beer bars, live music daily, and a legendary dancehall that still hosts weekly dances. On a Thursday afternoon in October, about 50 people enjoyed the music — and the occasional cock-a-doodle-doo from the roosters sharing the stage. 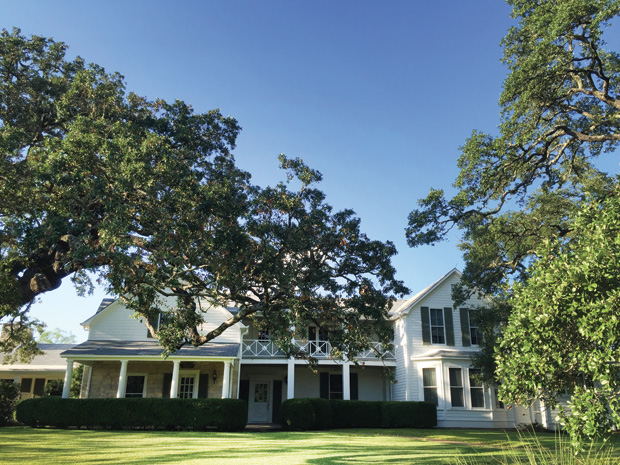 ▲ The Texas White House, home of President Lyndon Baines Johnson, is located on the LBJ Ranch in Stonewall, Texas, just 15 miles from Fredericksburg. Guests can tour the home’s first floor, including the president’s office, seen below in a vintage photo of LBJ and First Lady, Lady Bird. Photos by Julia Ermlich and provided by the Lyndon B. Johnson National Historical Park. 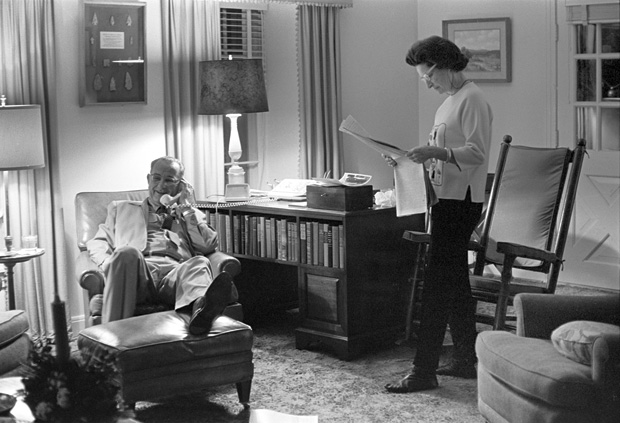 President Lyndon Baines Johnson — sworn in on Air Force One on Nov. 22, 1963, after the assassination of President John F. Kennedy — grew up in Texas Hill Country outside of Fredericksburg. Today, the Lyndon B. Johnson National Historic Park protects the birthplace, home, ranch, and final resting place of the 36th president of the United States. Since 2008, the president’s home, the Texas White House, has been open to public tours.

The tour offered by the National Park Service covers the entire ground floor, including the President’s Office, bright yellow kitchen, living room, dining, and the Johnson’s bedroom suites. The rooms have been restored to their appearance during the presidential years (1963 to 1968) while the bedroom suites retain their appearance at the time of President and Mrs. Johnson’s deaths. The leather recliners favored by the president and embossed with the presidential seal can be seen in several rooms. 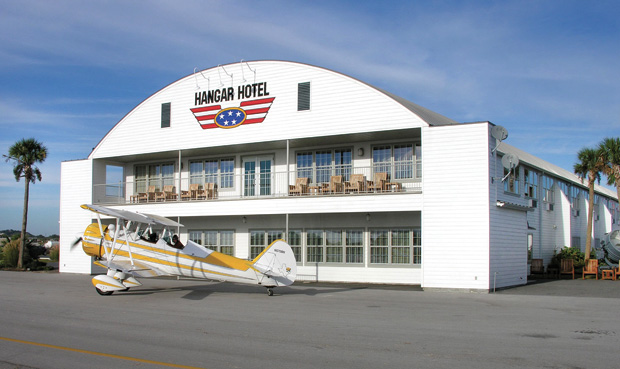 ▲ One of the more unique accommodations in Fredericksburg is the Hangar Hotel, located on a private airstrip. Sip cocktails on the balcony and watch the planes land.

On the driving tour of the ranch, guests see the one-room school LBJ first attended, his reconstructed birthplace home, family cemetery, grandfather’s house, the show barn, and landing strip used when he was President. LBJ’s hangar, where he kept his 13-passenger Lockheed (dubbed Air Force One and One-Half by the President and still on the property; guests can step inside), serves as the starting point of the tour. Among the many interesting facts I learned: LBJ spent fully 25 percent of his presidency at the Texas White House; Johnson liked to hold Cabinet meetings under the stately live oak at the home’s entrance; The National Park Service maintains a herd of Hereford cattle descended from Johnson’s registered herd and manages the ranch lands as a living demonstration of ranching the LBJ way.

Across the Pedernales River from the Lyndon B. Johnson National Historical Park is the Lyndon B. Johnson State Park & Historic Site. Visitors to this day can enjoy historical sites, the Sauer-Beckmann living history farm, picnicking, fishing, swimming, nature, and wildlife viewing. The park is home to part of the official Texas State Longhorn Herd.

If you are looking for yet another reason to visit Fredericksburg, a relatively recent addition to the area’s attractions is the proliferation of wineries opening — so much so that a group of a dozen wineries has rechristened the local state highway as Wine Road 290.  In fact, Texas Hill Country is the No. 2 wine destination in the U.S.

•  The CLUB at Baron’s CreekSide, baronscreekside.com/the-club.html