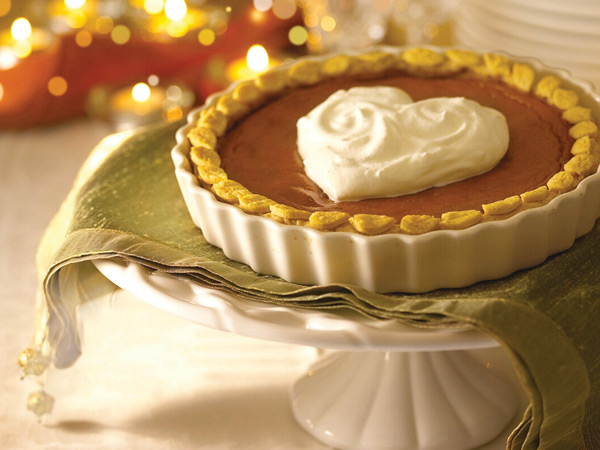 “Do you want to make a pumpkin pie?” She hands me her trusty recipe book and points me to her kitchen. She remains seated.

It’s just me and an empty 9-inch pie pan, my fear reflecting off its glass bottom. A weighty responsibility has been bestowed upon me, the making of, at moment’s notice, a pumpkin pie.

I’ve helped make pumpkin pies before, though she dealt with the most difficult steps, each involving eggs: separating, beating and folding. I admired her grace when cracking an egg so that the pointed end opens like a hatch to catch the unbroken yolk that drops from the remaining rounded end, the yolk miraculously staying intact and captured while the whites ooze into the awaiting bowl. I measured spices: 1 teaspoon cinnamon; ½ teaspoon ground ginger; 1/8 teaspoon ground cloves (add to this ¼ teaspoon salt).

I don’t want to let her, nor the pie, down. One of life’s greatest letdowns is bad pumpkin pie.

I pour the spices in a mixing bowl, along with a 15-ounce can of pumpkin, ½ cup of half and half, and ½ cup of light sour cream. I add ¾ cup of honey — hallelujah.

On deck: two yolks. I crack shell and desperately use a forefinger to keep the yolk from plopping out like some detached, sunny eyeball into the puddle of leaked albumen.

I pour the yolks into the pumpkin mixture, stirring until smooth. I use the electric hand mixer to turn the egg whites into a dreamy, creamy state. It amazes me how such a noisy, violent kitchen appliance creates such beauty. Gently, I pour the airy egg mixture atop the heavy pumpkin mixture, and with a rubber spatula, patiently, gently, apply a down-across-up-and-over motion over and over until all evidence of white vanishes.

I form a crust into the glass pan, cut off the excess edges and press my forefinger and middle finger onto the crust’s edge, keeping the fingers slightly apart; then, I use my left hand’s forefinger to pull up the edge between the fingers’ gap, repeating this throughout the pie’s circumference, the dimples and raised edges providing aesthetic appeal.

I pour the mixture into the shell and slide the pan into the oven. Fifteen minutes later, I reduce the heat from 450 to 350 degrees and bake 45 more minutes until the pie browns, loses its jiggle, and fills her house with pumpkin pie scent.

Nothing fills me with greater warmth than thoughts of pumpkin pie during the holidays, nothing that is, until making this particular pumpkin pie for us, for her, but without her for the first time.

She recommends, “tons of whipped cream,” stealing my heart in the simplest of ways, all for which I am most thankful.