In 1967, Evansville native Harold Kempf collaborated with a Chicago flour company to perfect his mix for Donut Bank Bakery donuts. A technician from the business was slated to join Kempf for a week, but on the third evening the man stood up from the work and announced his departure. Kempf asked about the remaining work to be done on the recipe and the technician replied, “I’ve got to go. You’re not going to make it.”

The doubt served as Kempf’s motivation to make his donut shop a success. Today, Donut Bank uses the same mix that Kempf created in 1967 and has expanded to nine locations in Evansville, Newburgh, Princeton, Indiana, and Henderson, Kentucky.

“It was always dad’s dream to have a donut shop,” says Chris Kempf, Harold’s son and current president of Donut Bank. “He felt like he could make donuts better than anyone else. We always looked at him like, ‘Donuts, really?’”

Yes, donuts — and coffee, bagels, pastries, cookies, muffins, brownies, and cakes, too. Harold, along with his wife Shirley Kempf, believed he knew what a quality donut tasted like and there were not enough bakeries that adequately produced the treat. In 1967, Harold, whose father worked at Honey Crust Bakery in the 1940s in Evansville, built his first location at 1809 First Ave. next to his brother Greg’s office building, but within two weeks of opening, the building slid into Pigeon Creek and had to be rebuilt. 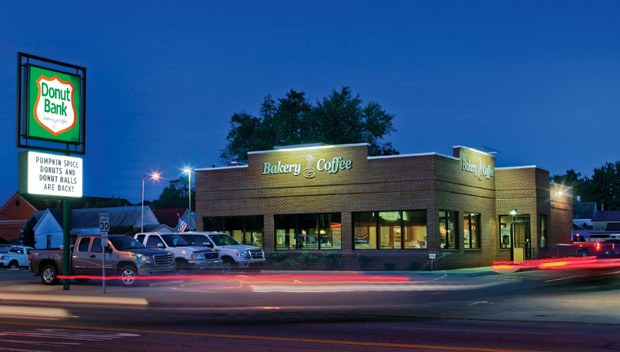 ▲ The St. Joseph Avenue location of Donut Bank Bakery & Coffee, built in 1976, was the location that the Kempfs say “changed Donut Bank forever."It later was rebuilt in 2003. Photo by Jerry Butts. Below, the Kempfs’ first location was at 1809 First Ave., which opened on July 18, 1967. Photo provided by Donut Bank. 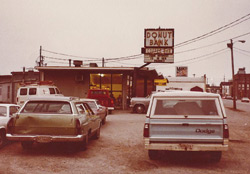 “Dad grew very slow — just like we’ve grown slow,” says Chris, who oversees all nine stores today. “Whenever he opened the location at 1809 First Ave., he bought a gas station at Washington and Weinbach (in 1974). He thought that was a really good location and it turned out to be the move that sent Donut Bank on its way. Without that location, things would have been really, really difficult.”

“And a lot different,” adds 42-year-old Joe Kempf, Chris’ younger brother who shares the vice president role with their other brother Ben Kempf.

“I think that store changed Donut Bank forever,” says Ben. “It made Donut Bank the neighborhood hangout. With Washington and St. Joseph Avenue (built in 1976), it turned into a meeting place. Instead of just a place to buy donuts, it was a place where everyone hung out.”

In 1981, Donut Bank added its Green River Road location, and in 1989, the family built the location on Diamond Avenue, which created the opportunity for the store to transform into the full-fledged bakery it is today. Its breadth of treats include more than 100 different donuts and baked goods making it the perfect “meeting place” for countless breakfast clubs and diners across the Tri-State. 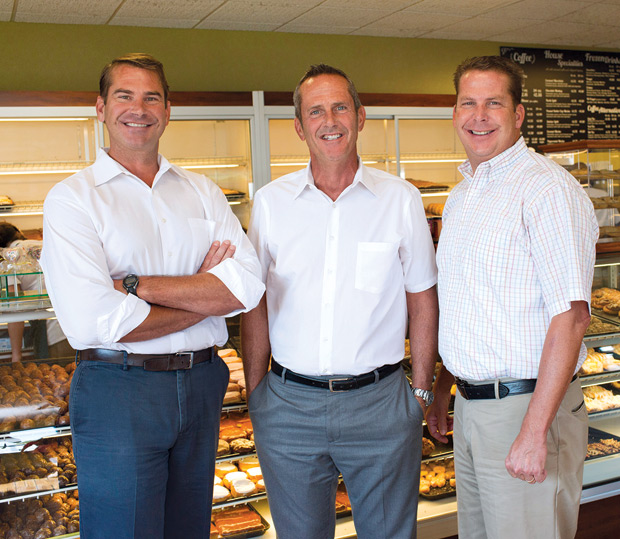 “It’s fun to go into each store, because the atmosphere is just a little different,” says Joe, who along with his brothers, is in their various stores every day 10 to 12 hours a day. “There’s Lester over at Washington, and then there’s the guys who sit at St. Joe and Green River. At Lincoln Avenue, there are people who put four or five tables together and play bridge. It’s almost like your extended family and you miss them when you don’t see them.”

Evansville native Mary Jo Marks is one of the “regulars,” who finds a table at Donut Bank on Diamond Avenue almost every day where she orders a Long John and a cup of coffee in a to-go mug, because she likes her coffee “really, really hot.” The staff at Donut Bank practically has her order ready before she steps up to the counter, because of her consistency, and their initiative and friendly customer service.

“There’s always room for one more,” says Marks about why she enjoys frequenting Donut Bank. “You can have a private one-on-one conversation or sit with a group. It’s kind of a hang out. When someone says they need to talk with me, I say, ‘What end of town are you on?’ I can give directions to any Donut Bank in town, because it’s a place everybody knows.” 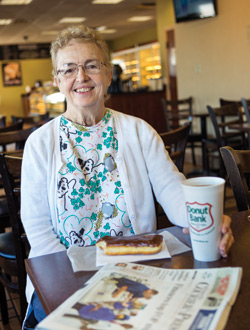 Marks, 73, a nurse who now volunteers at the Ronald McDonald House in her spare time, meets with a group of women at Donut Bank every Wednesday. She says she already is teaching her great-granddaughter to love the donut shop.

“My dad always said that what we do is fun food,” says Chris, who helps oversee the company’s six supervisors. “Bakery by itself, maybe not so much. But donuts and a really good cup of coffee, it’s a really fun environment. We’ve even told our sales people that if you’re going to work retail, why not work at a place where the people are very happy to be here. Our customers are. It makes our job so much easier.

“People will say to us your staff is always in a good mood. It’s because our customers are always in a good mood. They are coming here for a treat, for an experience, for something a little bit above the ordinary. You can actually hear their mood through the intercom at the drive-thru that they are happy to be here.”

Marks says the Evansville community has a strong brand loyalty to the family-owned, third-generation donut and coffee shop, and it’s something the Kempfs don’t take lightly.

“We are honored by that and it is something we don’t take for granted,” says Ben, 48. “People don’t understand the responsibility behind that. People don’t just continue to show up because we are Donut Bank. They stick with us because of the quality of service.”

Donut Bank’s philosophy of business was built on three principles, says Chris. The store’s goal is to serve the best quality food possible, have exceptionally nice and friendly sales associates, and offer a clean environment. Every location also offers free Wi-Fi. The store never sells day-old donuts — they always are fresh with a formula that hasn’t changed except for a few tweaks over the years. Shirley handpicked Donut Bank’s signature coffee blend more than 20 years ago after working to perfect it for six years. The store also has a reputation of giving — frequently donating sweets to race events, golf tournaments, charity fundraisers, and silent auctions.

“Unlike a lot of other businesses, this is our home, too,” says Chris, 56, whose son Chris also works at Donut Bank. “We live here. We want the best for this community.”

As the store sees three generations of customers and owners, so too does it host its third generation of employees with grandparents encouraging their grandchildren to apply for a position at Donut Bank.

“The people who worked here while I was a kid set a standard of service that somehow keeps being dragged through generations of workers,” according to Ben. “Somehow that knowledge, pride, and expectation keeps being pushed through.” 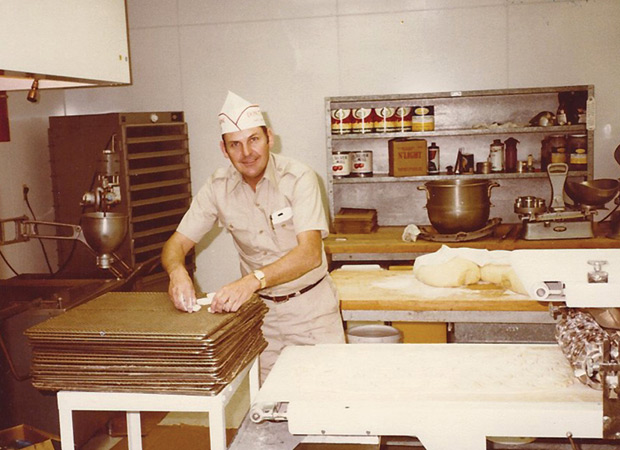 ▲ Harold Kempf, patriarch of the Donut Bank family, is pictured making donuts in 1979. Below, Donut Bank Bakery & Coffee Shop opens at 1809 First Ave. As a grand opening special, the store sold a dozen of glazed or cake donuts for 59 cents. Photos provided by Donut Bank. 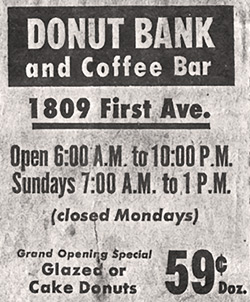 When Donut Bank opened in 1967, Chris was seven years old, Ben was a toddler, and Joe would be born years later. Harold and Shirley, who had seven children total, asked each family member to be involved in helping make donuts, serve coffee, decorate cakes, clean countertops, pick up trash, and more.

“We all started working here when we were tykes,” says Chris. “It was what you did. It was a good thing. We had the opportunity to be around so many good people — great people — who were our customers and those who worked here. Being in that environment so often, we probably didn’t know it, but it was going to help us in the future.

“There are some kids where you get them in front of a lot of other people and they kind of step back, but us, we were thrown into environments that were so crazy. We recently had a really long training meeting about how shocked people are when they get behind the counter and you have 100 people walking through the door. We forget how intimidating that is, but we were exposed to that at 7, 8, 9 years old.”

The boys would make donuts, while the girls would serve customers and decorate cakes. The Kempf brothers’ sisters were the ones who established the cake process Donut Bank still uses today. While Chris, Ben, and Joe help operate the stores, their four other siblings are involved with other ventures. Their parents Harold and Shirley are retired, but still are at the end of a coffee line at least four times a week.

“What people don’t realize is donuts are really, really hard work, and that’s why a lot of bakeries don’t serve donuts and a lot of donut places aren’t around any more,” says Chris, who considered being an electrical engineer at one time over working at the family business.

“There is an incredible amount of energy and machinery needed. The hours start at midnight. A baker can’t just come in at 5 a.m. and start baking. Us, we are baking eight hours before we open just to have our donuts ready. It is time consuming and hard. To choose that path was difficult in one way or another for all of us. The sacrifices are real.”

Ben weighed becoming a deputy sheriff and Joe contemplated working as a physical therapist, but all three brothers came back to work at Donut Bank. 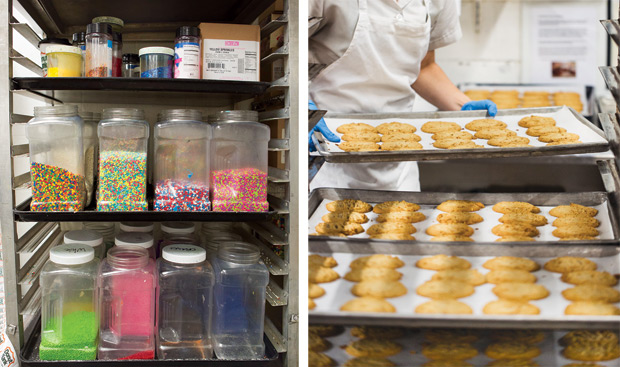 “You have to remember that we all worked here — brothers, sisters, cousins, aunts,” says Ben, whose 19-year-old daughter is employed at Donut Bank while she attends the University of Southern Indiana. “If I left, then all my family is still here. It was a family project. It was what we all worked toward. It took all of us to get where we are now. All seven kids have their fingerprints here.”

Such commitment to the business has earned the Kempfs nine locations in Southern Indiana and branching into Western Kentucky (the Henderson store was the latest to join in May 2014), and adding another site always is a possibility, says Chris. 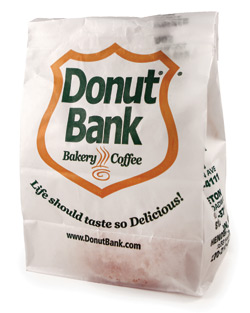 “We would love to have more locations, but so far the philosophy of buying a great location instead of buying the best location available has worked for us,” says Chris. “If we see that happen, we will look at it.”

The philosophy has worked for the family-owned company and its success has kept many big players such as Dunkin’ Donuts and Krispy Kreme from dominating the market. The Kempfs are well aware of their competition — Krispy Kreme opened in October 2003 on N. Burkhardt Road, and there have been several Starbucks pop up in the area since the early 2000s. But to the brothers, Donut Bank is competing against more than that. Donuts can be found in nearly every convenience store and every grocery store, as well as coffee. Because of this, the owners always have been open to try new ideas and introduce new products.

“We have an obligation to our customers who support us now,” says Ben. “Some companies grow too fast and they forget who brought them to the dance … I think (our father) is proud that we have taken all of his life’s effort and tried to not improve, but just to move it along, make it bigger, while keeping his values.”