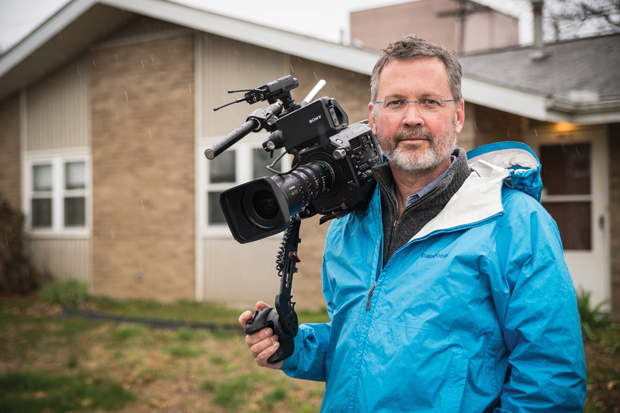 When Jessica MacLeod began working as a primary healthcare provider to homebound patients in Evansville, Patrick O’Connor knew he wanted to film it. MacLeod agreed, and O’Connor created his award-winning documentary “The Invisible Patients.”

“In her telling, she described a hidden group of people who were neglected, isolated, and often struggling
to get by,” says O’Connor. “She called them ‘invisible patients,’ living at the very edges of our healthcare system.”

O’Connor had the perfect experience for this project after working as a screenwriter and director for years, later starting his own marketing company in Evansville where he collaborated with clients like Deaconess Hospital, Evansville Surgical Associates, and Methodist Hospital in Henderson, Kentucky, before moving to Pass Christian, Mississippi, with his wife, author Margaret McMullen.

The film industry can be a hard career path to break into. How did you become interested and get your start in screenwriting and filmmaking?
I was writing short fiction at the University of Arkansas, Fayetteville, Arkansas, and two young producers read some of my work and invited me to participate in a screenwriting fellowship sponsored by Steven Spielberg. Spielberg ended up optioning and purchasing one of the screenplays I wrote that year. Elijah Wood was attached to star in the film, but they never made it.

This is your first documentary film. What were some of the challenges you faced while working on “The Invisible Patients?”
The first issue was finding patients who would agree to allow us into their homes — and their lives — and shoot video during Jess’s visits. Once we had the four patients on board, it really was a matter of developing those relationships, building trust over time, and simply being there with them when Jess came to visit.

How did you get the families in “The Invisible Patients” to open up and let you into their lives?
I met with them in their homes a few times before we ever filmed anything. I wanted to get to know them a bit and have them get to know me and why I was making this film. I also told them I’d show them the film before anyone else saw it, and if there was anything in the film that made them uncomfortable, I’d cut it out. Fortunately, they all were happy with how the film portrayed their lives. Over the course of the nine months or so that we shot, we became pretty close. I still keep in touch with them.

Would you make another documentary film in the future?
I’m working on a film about the Mississippi state flag, which is the last flag of the original Confederacy to still have a Confederate battle flag on its state flag. It’s a very contentious issue down here, and I’m following activists on both sides of the debate — take it down or keep it flying.

For more information about Patrick O’Connor and his work, visit oconnorcreative.com.