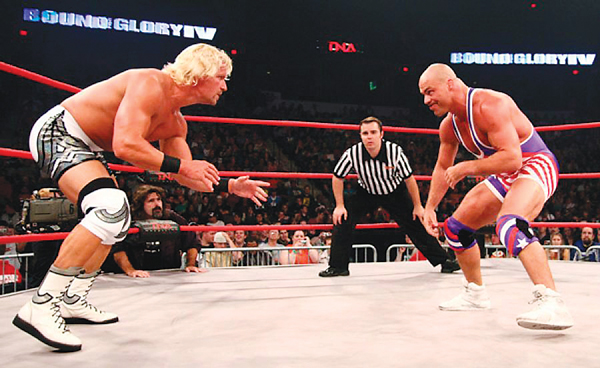 As a senior in high school, Evansville native Dan Engler never saw himself making it to professional wrestling’s biggest stage. But with some encouragement from friends and family and a little push from Evansville’s rich wrestling scene, Engler has made the most of donning the black and white stripes.

Engler, one of six referees for World Wrestling Entertainment’s Friday Night SmackDown, recalls his love of professional wrestling started as a preteen, when he watched his first WWE (then called the World Wrestling Federation) pay-per-view match in eighth grade.

“When I was in eighth grade, I was at a buddy’s house watching the Royal Rumble, and we’d gone upstairs to play Transformers for a few minutes, came back down, and the match was over,” he says. “My buddy’s mom was so mad that we missed it, she wouldn’t tell us who won. She paid good money for that.”

The next weekend, as Engler was channel surfing, he landed on one of WWF’s weekly shows, broadcasting a press conference choosing the No. 1 contender to champion Ric Flair. He couldn’t turn away from the endless string of theatrics, chair shots, and body slams. From then on, he was hooked.

Engler’s journey to wrestling’s premier promotion started in 1992 during his freshman year at F.J. Reitz High School. Already a part-time referee for little league soccer, he began attending United States Wrestling Association matches held at the historic Soldiers and Sailors Memorial Coliseum in Downtown Evansville, keeping a close eye on the referees. One day after a show in 1996 when he was a senior in high school, he struck up a conversation with an official, Mark Vance, who took Engler under his wing and started training him for his first match, held later that summer at Ellis Park.

“Historically, wrestling has always been really good in Evansville,” says Engler. “It’s had its ups and downs, but it’s always been a strong town for wrestling, going back over a hundred years. Bosse Field actually opened with a baseball game and then a wrestling match back in 1915.”

Engler refereed in Indiana and Kentucky for several years under the name Rudy Engler, the moniker given to him by his football teammates at Reitz, where he played wide receiver from 1992 to 1995.

After a few months’ hiatus, Engler returned to the ring in 2002 and began working for longtime promoter Bert Prentice, who helped him sign with Total Nonstop Action Wrestling (now called Impact Wrestling). He refereed in TNA under the new name Rudy Charles, a combination of his high school nickname and his father’s name.

“My buddy called me and said they were doing shows in Tennessee, and I got back into it a little bit,” he says. “I remember thinking, ‘There’s only probably 10 people that make a living refereeing professional wrestling, but why can’t I be one of them?’”

The company was a new venture started by former WWE wrestler Jeff Jarrett and his father Jerry, who ran USWA shows in Evansville for decades, mostly in the Memorial Coliseum, which hosts shows still to this day. Engler would spend seven years at TNA, serving as the promotion’s senior referee for most of that time. He then signed with WWE in 2013, fulfilling a longtime dream dating back to his early days watching wrestlers such as Jerry “The King” Lawler and Mark “The Undertaker” Calaway duke it out in the squared circle.

In total, Engler has officiated just over 1,900 shows in his 26-year career, which translates to more than 6,000 matches. His work has taken him to 26 countries, including Singapore, India, Japan, France, Austria, Argentina, Peru, Switzerland, and the United Kingdom. He recently returned from refereeing the Elimination Chamber pay-per-view match in Jeddah, Saudi Arabia.

Engler says his favorite of the matches he’s officiated was a bout between two of the company’s brightest stars, John Cena and The Undertaker, at WrestleMania 34 at New Orleans’ Superdome in 2018.

“Behind the scenes, they wanted to have Undertaker coming in as a surprise,” he says. “The night before, under a clandestine vehicle, we went to the executive airport since they flew him in on a private plane, got him in a car service to the building to meet with Cena, and then got him into the hotel room without anybody seeing him. They kind of had me in charge of that.”

“It was such a cool experience and behind-the-scenes story, and then getting to be out there when it all went down,” Engler adds. “It wasn’t even a long match, but just the atmosphere — I get goosebumps just thinking about it.”

In his time with WWE, Engler has seven times worked WrestleMania, the company’s biggest show of the year. He will work his eighth — WrestleMania 38 — on April 2-3, 2022, at AT&T Stadium in Arlington, Texas. His goal is to work WrestleMania’s main event before he retires.

Despite his worldwide travels and appearances on the grandest of stages, Engler says one of his favorite places to work is still Evansville’s Ford Center. His most recent show at the Ford Center was a SmackDown event on Nov. 5, 2021. Engler cherished having his three kids, parents, and brother in the stands.

“Being close to home is always nice. Having family and friends that come to the show, that’s always a special feeling,” he says. “But as far as the energy, nothing beats Madison Square Garden in New York City.”

A native West Sider, Engler still lives in Evansville, though he is often on the road. He travels at least three days a week and is away from home up to 250 days a year.

Outside the ring, Engler has become something of a football historian for his alma mater. He still runs an unofficial Reitz High School football website, where he posts current season recaps and scores and recounts Panther football history.

“After I graduated (in 1996), that summer my dad got the internet, which is crazy to think about now,” Engler says. “I wanted to do a website, and I wasn’t sure what to do it on. My dad suggested I create one for Reitz football, and that was how that started.”

Engler began gathering information and that summer, around the same time that he started his pro wrestling career, he launched the Reitz football website on Evansville’s original internet provider, Evansville Online. In 1998, he bought the website’s domain name. Now, as the football program has surpassed 100 years, Engler has run the website for about a quarter of the program’s history.

“Reitz has such a great tradition, arguably the best in Evansville and all of Indiana,” he says. “I’ve been blessed that I got to play in high school and I’ve been all over the world, but there’s just something special about football in the Reitz Bowl.”