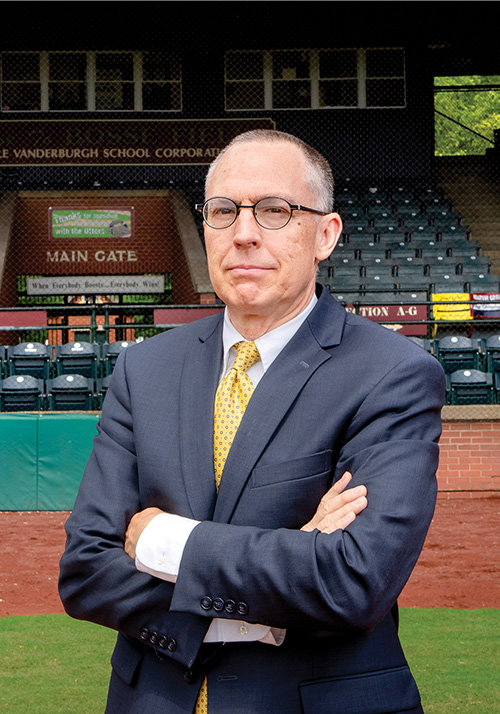 It was never Bill Bussing’s idea to buy a professional baseball team. In fact, it was the idea of out-of-town investors who wanted local partners to buy the team. Bussing and his wife Phyllis purchased the Evansville Otters in April 2001 with his father W.C. “Bud” Bussing, Jr., mother Connie Bussing, and sister Marie Bussing.

“I love the game, and I thought I knew the game well. But I knew nothing about the business side of baseball,” says Bussing. “It was a rapid learning curve. It’s a difficult business.”

One thing in Bussing’s favor was he already knew how to get a community behind a business as a solo practitioner attorney, working in estate planning since 1989. An Evansville boy through and through, his entire life and career has been spent in the city — aside from a couple stints at the University of Notre Dame, where he earned three graduate degrees.

“It suits me well, being a native,” he says. “One’s best advertisement is word of mouth. If you do good work for someone, chances are he or she will recommend you to someone else.”

That same approach, which led to his success in law, is the same one he brings to every professional project.

What is the biggest thing you have learned throughout your career practicing law?
If you give a client the best advice you can, even if it’s not in your best interest, then you serve them well. For example, not everybody needs a will, which violates the conventional wisdom. I try to look at it from the clients’ perspective — what’s best for them as opposed to what’s best for me.

What do you think is one of the most unexpected things you do as the owner of the Otters?
That’s an easy one: I maintain the Christmas lights out front. That’s my pet project. We have about 30,000 Christmas lights that make it sparkle at night and create that magical atmosphere. I pretty much taught myself how to fix any Christmas tree lights, because they’re all a little bit different. It’s an archaic talent of little or no value except for here.

So is that your forte at home during Christmastime, too?
No! We have 100,000 people here a year. We don’t have that many through our house.

What do you think is the Evansville Otters’ role in the community?
We package it as an entertainment experience, because as much as I hate to admit it, not everybody is a baseball fan. We have to appeal to a much wider audience than just sports fans. We want people to have so much fun here they can’t wait to come back. It’s really important for us to do it right and treat people well. Baseball almost is a backdrop.

Bosse Field is such an iconic place in Evansville. How does it feel to be part of that legacy?
We’re trustees of this sacred place. It’s 103 years old. We believe we are the third oldest professional baseball stadium in the U.S. behind Wrigley Field in Chicago and Fenway Park in Boston. Our local school corporation, EVSC, has owned this facility since it was built in 1915. We lease it from the school corporation, but it’s the public’s facility. It’s like a park, and we’re just passing through. That is part of the reason we let people on the field after the game, because it belongs to them. It is such a special place. I call it hallowed ground.