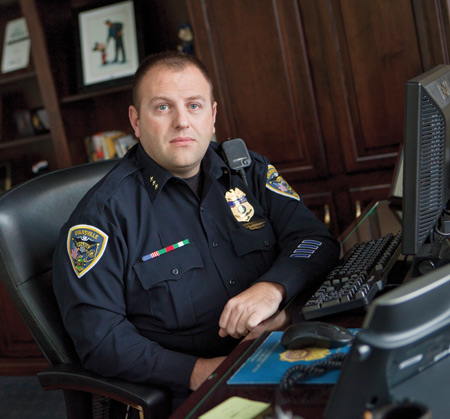 His Story: On Jan. 1, 2012, Bolin was inaugurated as the new police chief of Evansville. He replaces Brad Hill, who had been chief for eight years.

His Resume: The Harrison High School graduate began his career with the Henderson Police Department (Henderson, Ky.) before coming to the Evansville department in 1998. He’s worked as a liaison officer at Bosse High School and has been a crime prevention officer in the south sector. Before taking over as police chief, Bolin was a sergeant for 2 1/2 years.

His Perspective: “I think the biggest thing the public needs to understand is that police officers, day in and day out, respond to people at their worst,” Bolin says. “We don’t see the good in people, we see the bad. People don’t call 911 because they’re having a great day, they call because somebody stole something from them, somebody is threatening them, or somebody has physically done something to them. It’s a tough job, but at the same time we get to do the job that everybody else reads about every day.”

On Finding His Way: While I was in college, I worked at the old Morgan Avenue K-Mart as a part-time job. I was asked if I’d like to start catching shoplifters — what they call loss prevention. I said sure and I did it. That led me to becoming a police officer.

On Methamphetamine: Methamphetamine is probably one of the biggest things we have hitting our community locally. What makes it so bad is the dangerousness of it. It’s not just affecting the people that are doing it; we’re having hotel rooms blow up, a school custodian (in Gibson County) doing it in the school, and we’ve had a lady at Wal-Mart walking around with a meth lab in her shopping cart. It’s just not a matter of people ruining their own lives, there’s basically people walking around here with bombs. They’re not intending for them to be bombs but that’s what they are.

On Priorities: My number one goal is starting internally with the department. I want to turn the time around with these guys remembering why they became police officers. Almost every one of us go into police work because we think we can make a difference and I think a lot of people lose track of that after they’ve been here for a while. So if we get guys excited about what they’re doing again, I think they’ll be more apt to treat the public better and do a better job. We’ve had the emergence of a gang problem in the past couple of years. It’s not to the level of the bigger cities, but we do have a gang problem. So I’d like to get on that early and put a stop to it before it really gets started. The other things are quality of life issues, burglaries, thefts, and criminal mischief. Things like that we’re always going to have. That goes back to my first point; I think if we have a happy workforce we can put a dent in some of these numbers.

On Family: My wife and I have been married almost 16 years. We have three boys: a freshman in high school, a seventh grader, and a fourth grader. I’ve been a police officer since my oldest boy was born, so their whole lives dad’s been a police officer. To them it’s not that big of a deal. I think my 9-year-old thinks it’s kind of cool that I’m the chief, but the other two couldn’t care less.

On His Duty: I’m on call 24/7 as the police chief. If we have a tornado or something big, I’m going to have to respond and go to it. That’s a little bit different than being the police sergeant that just responded to the runs. Now, I’m responsible for everything.

On the Future of the Police Department: My goal would be for people to look at the Evansville Police Department as a model for other departments across the country; to be able to say we’re one of the top, if not the top police department in the country. It sounds like a grand goal, but if you’re going to do something you should try to do the best at it.