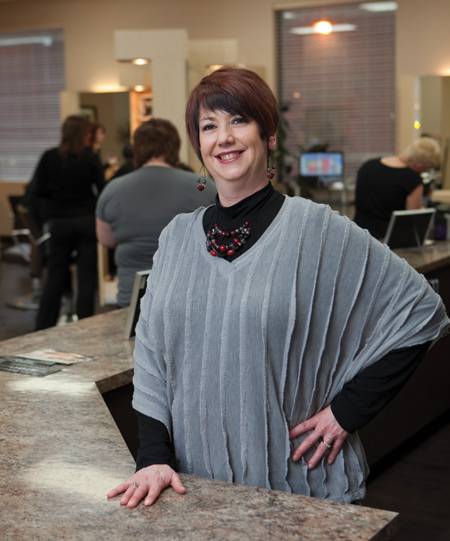 Inside the Indianapolis Statehouse, Shannon Woolsey stood in a crowd of 300 hairdressers. She wasn’t normally one to rally against the government, but this was personal. Woolsey earned her success; she spent $2,500 to put herself through 10 months of cosmetology school in 1982 (which now costs $18,000) and worked more than 20 years as a stylist and assistant manager at Evansville salons before opening her own in 2006. Working hard and paying her dues is all this mother of three has known throughout her career. That’s partly why last January, when she first heard that HB 1006 — a house bill threatening to deregulate the professions of cosmetologists, barbers, dieticians, hearing aid dealers, private investigator firms, and security guards — was being considered in Indiana legislation, Woolsey was concerned. She wasn’t alone. Of the 300 Indiana protestors, more than half were from Evansville. “We’re worried about public safety and health,” she says. If the bill passed, anyone could take on these professions without the proper schooling or license, meaning potential sanitary issues as well as poor service.

As a business owner, Woolsey’s number one priority is to protect her staff while providing the best customer service to her guests. She was one of 10 who spoke at the protest; one of 10 able to persuade the politicians to revoke the bill with their informative speeches.

Nearly 80 percent of those who graduate from beauty school aren’t styling after five years. The reason: they can’t make a living. Woolsey wanted to create a way to increase retention. When her former employer of 19 years, Klein’s Hair Fashions (now Klein’s Elan Boutique and Salon), decided to sell the business, Woolsey saw an opportunity to use her managerial skills in her own salon. “I knew it was time to strike out on my own,” she says. “It was never my goal to be a manager my whole career.” In 2006, she opened Shannon Aleksandr’s Salon and Spa on Metro Avenue next to Great Harvest Bread Co. before moving to her current location on Virginia Street in 2011, and has been growing her client base with an atypical business approach.

Instead of booth rentals, all 24 service providers — including stylists, estheticians, massage therapists, and support staff — work for her. She withholds taxes, Social Security, and Medicare, and provides them with a full-time work schedule of 32 hours per week, which they rarely are permitted to exceed.

With a set schedule and consistent pay, Woolsey’s approach helps more stylists stay in the industry, and it also gives them more time to enjoy life. “They’re not going to starve,” Woolsey says. “I know I’ve done a good job if they are able to buy a house, buy a car, and support their families.”

Furthering the commitment to her employees, Woolsey provides continuing education for each of them. One of her requirements in hiring is three years or less experience. When they’re fresh out of beauty school, she says, they’re hungry for work and haven’t had time to develop bad habits. Once hired, each employee goes through an associates program with the salon, where they are paired with a licensed service provider who coaches them for nine months.

It’s not until they’ve completed the program that the student becomes a level one stylist, with the chance to advance seven levels as they progress in skill. Throughout their progression, Woolsey holds mandatory in-house classes 13 times a year where professionals come in and teach about products and new techniques. She also requires each employee to attend two additional courses outside of the salon. The continued education is something all of Woolsey’s employees appreciate. When first arriving at Shannon Aleksandr’s, says Maggie Stoltz, a recent addition to the salon’s stylist crew, “you know the basics.” With the constant schooling, Stoltz’s potential is endless. “I would not want to go anywhere else,” she says.

Influenced by passion in mentoring, Woolsey also requires monthly, one-on-one coaching sessions with her workers where individual goals are set. Once employees have reached and maintained those goals for three consecutive months, they move up a level — their prices go up and their pay is increased.

It’s a non-competitive work environment that holds each employee to the same set of standards, including the same customer service expectations, the same color treatment, the same cutting techniques, etc. With self-employment booth rentals, says Woolsey, stylists can become very territorial of their clients. At Shannon Aleksandr’s, the concept is that guests are able to choose their stylist, even a different one each time, while receiving the same, great service. JD Opel, a Jasper, Ind., native who has been a stylist with Shannon Aleksandr’s for nearly six years, says if he’s not available and his usual guest needs a style, he doesn’t care if someone else fills in. “We want guests to know that it’s OK if you’re sitting in someone else’s chair,” he says. “We just want people to be here.”

The 4,500-square-foot facility houses an esthetic center, five booking stations, three massage rooms, and a nail center. Eminence Organics, one of the world’s leading organic skincare lines, sits on the store’s front shelves — cleansers, exfoliants, masques, moisturizers, serums, eye care, and more. The line, which is shipped from Hungary, contains only fresh ingredients hand-picked from organic farms; there isn’t anything in them that can’t be eaten. Nearby, the esthetic center gleams with vitamin-infused makeup brand gloMinerals, and Redken hair products fill more shelves.

Settling into its inaugural year at the Virginia Street location, Shannon Aleksandr’s has increased its client base by 45 percent since the move. “We have a very strong referral business,” says Woolsey. Their former clients “followed us and helped us grow.” The tireless owner doesn’t intend to stop there; she anticipates a 20 percent improvement in business each year, has plans to hire 15 more service providers, and hopes to eventually open additional locations.

Woolsey also wants to one day give up styling hair, and instead focus on the business aspect of it. “Having an artistic brain,” she says, “I never thought I’d enjoy sitting behind a laptop, but I do.”