Blessed Be Thy Beats

Each Sunday, Father Claude Burns carefully dresses in his traditional Catholic robes, grabs his Bible, and steps in front of the congregation at St. John the Baptist Catholic Church in Newburgh, Indiana, to deliver what he hopes is an inspiring message to help the members grow in their faith.

But Burns uses more than just his spoken word at the pulpit to connect listeners to Christianity — he combines his two loves of God and hip hop as a Catholic rapper.

With more than a million views on his videos online and thousands more downloads of his songs on Spotify, Burns creates music often seen as very different than his profession, garnering influence from old-school hip hop groups like A Tribe Called Quest and Arrested Development and modern artists such as Lucas Joyner, Juice World, and Billie Eilish.

Known as Father Pontifex, the Latin term for bridge builder, he has two decades of experience in the music industry with four albums and another on the way.

“I wanted to have a name that was kind of an icon really,” he says. “Pontifex is like a symbol for all priests. I didn’t want to use my real name, so Pontifex is like a characteristic of a priest, someone who builds bridges between people and faith.”

Though he doesn’t have any formal music training, Burns knows how to read music because of his mother who was a concert pianist. He says he has a good sense of what sounds good and what doesn’t.

His most popular video is from 2013, when he used spoken word poetry to respond to Jefferson Bethke’s “Why I Hate Religion, But Love Jesus” video on YouTube with the help of Spirit Juice Entertainment, a Chicago-based Catholic entertainment company that produces Father Pontifex’s videos.

The balance of these two careers has allowed Burns to give viewers an authentic musical experience and come away with inspiration they may not have been looking for.

Where did you get your start in music? Why is this something you wanted to pursue?

I say the very beginning was just in the neighborhood I lived in Evansville, and I grew up close to the Jimtown area. Growing up, rap music and basketball were life. Words and poetry were a big love even before hip hop kind of emerged and just the beat of the hip hop is so cutting edge. That mixed with powerful lyrics really can be influential. 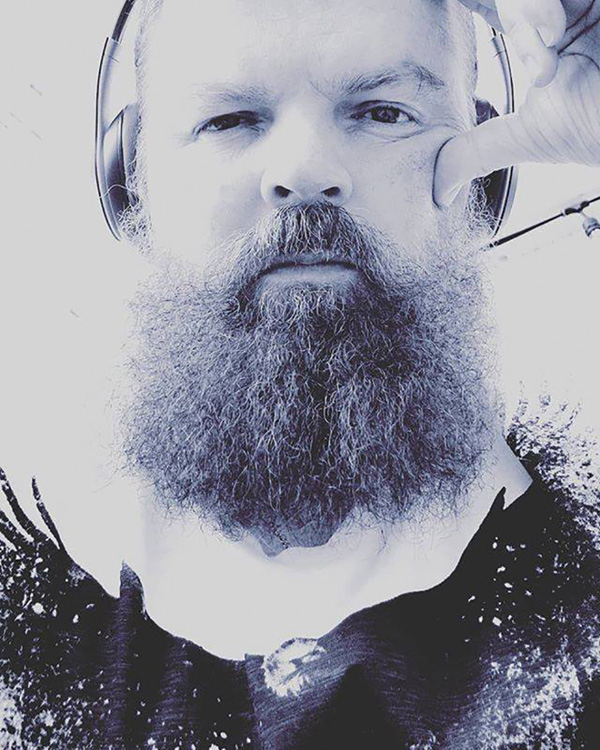 I was in a youth group, actually not a Catholic youth group — it was close to my house at Gethsemane Temple. They had a really strong Christian youth group and they supported a lot of creativity. So I started a Christian rap group, Agape Crew, and agape is a word that means love. We did shows and we actually won a talent show at this Christian night club and the prize was getting studio time. We recorded a two-song demo and from there, recorded a bigger piece of material. But we did shows all over the Tri-State, and then I almost actually went to Dallas, Texas, to work with some of the pioneers of Christian Rap.

I backed away from all of it, because I felt like I was supposed to go to seminary. When I went to seminary, I really didn’t think about using music anymore. I thought that chapter of my life was finished, but I just loved it so much I had to get back into it.

What type of influence do you think your music has on others?

I just knew rap can be powerful in the way that it can influence. What I do in here, it serves one purpose. These are people who embrace the faith and nourish it, but with the music, it reaches out into the public sector. For me, it’s more of an opportunity to be creative, just because I love the music, but then to maybe inspire and to create something you trust will have a positive impact on others. We don’t just try to imitate culture and make the Catholic version of something. We want to just do things that are beautiful and unique and do it in an excellent way.

I think the Catholic or the Christian version of anything comes off kind of cheesy. I think authentic art is important and I think that’s what resonates with people. I heard a quote, I think it was from YouTube, but it said, “The most influential artists are either people who are running to God or running away from God.”

How do you balance being a Christian artist while also being a priest? 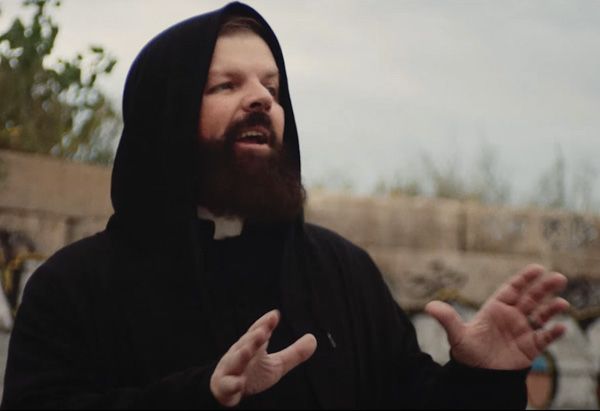 It’s interesting because I do have to balance it, because always my first priority is to be the pastor of the largest parish in the Diocese of Evansville. It’s funny because some of the people I serve in the parish, some of the older people, will say “I don’t really like rap much, but I like what you did there.”

At least it gets them to look at it differently. It seems incompatible, a priest and hip hop, but it transforms their understanding of it. It’s not just bad lyrics and all about drugs or whatever. There’s just no denying its influence in today’s culture.

Where do you draw inspiration for your lyrics?

I would say human experience. Within a day I can experience the highs and the lows. I can be called to anoint somebody at Deaconess Hospital and then I can do a baptism all in the same day. Some of it comes from that inspiration of how do I process that. How do I keep perspective on life, dealing with so many different things? And also trying to keep a pulse on the human experience of people.

In the new album, there will definitely be stuff that references racism and what went down with George Floyd. Also things I see on social media about how we deal with each other in a human way, and how with social media, we don’t always pay attention to the person on the other side of the keyboard. 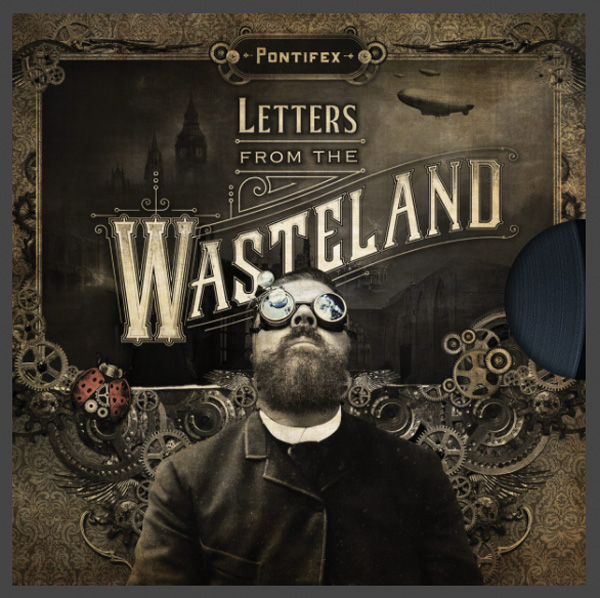 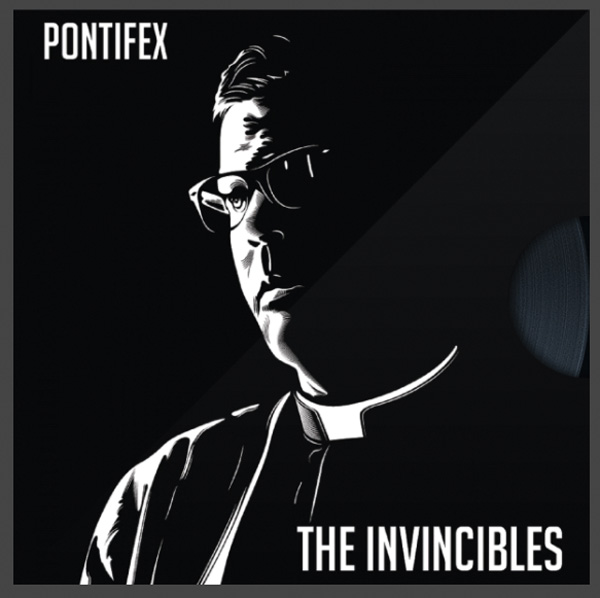 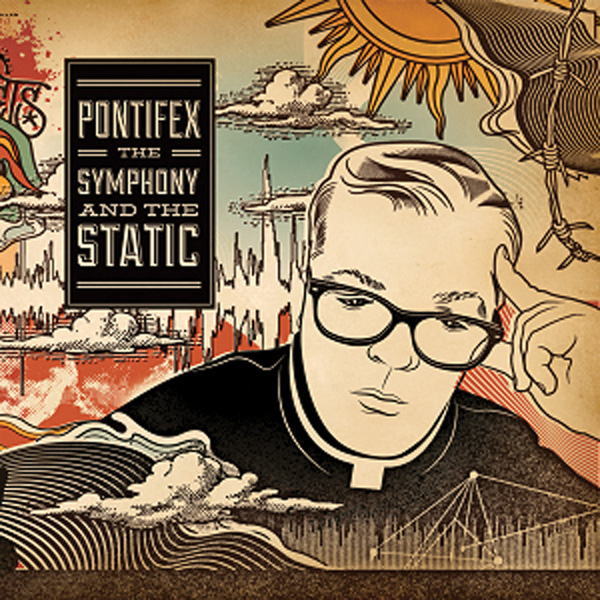