The easiest way to describe Bob Jones is with one word: humble.

Ask him how he landed the position of CEO of Old National Bank and without hesitation, he gives the credit to his wife Lisa.

“One of the things the bank’s board did during the interview process was actually talk to people we interacted with as a couple. And what I’ve been told is that my wife and how she treated people made us the favored candidates,” says Jones.

When talking about the many organizations, projects, and events he has been a part of, Jones is quick to give credit elsewhere first and rarely takes any for himself. It is a part of his personality that many around him say is just what makes Jones who he is.

“Without a doubt his humility is his strongest asset,” says YMCA of Southwestern Indiana executive director Derrick Stewart. “It is a genuine sense of humility, this belief that it is not about him.”

“There’s probably not an organization in this community he has not touched,” says Kathy Schoettlin, chief community relations and social responsibility officer with Old National. “Half of which you would never know about because there’s a lot of behind-the-scenes conversation, coaching, and support he gives.”

Jones grew up in the west side Cleveland, Ohio, suburb known as Bay Village. His childhood was not an interesting one, he claims, but it is one that significantly shaped his life. After his parents’ divorce when he was young, he moved in with his grandmother, who helped raise him, and lived with her until he finished his college years at Ashland University, Ashland, Ohio.

“Seeing other people who had success, and not having much growing up, kind of created a drive in me to succeed,” says Jones.

College started with one intention and quickly morphed into another, he explains. Many large schools in the state were recruiting Jones for football, but Ashland’s head coach Fred Martinelli was who stood out.

“When I was being recruited, Coach Martinelli looked at me and said, ‘You know, you’re really not that good of a football player. You better get a damn good education.’ And it just stuck,” he says. “He really struck me. That’s why I chose to go to Ashland. Probably the second smartest decision I ever made in my life.”

When he graduated from Ashland with a degree in political science and business administration, he took a position with Society Bank in Cleveland with one purpose — to eventually get to Columbus, where his wife was working.

In Columbus, his first assignment as a management trainee was being in charge of the mailroom.

“When I asked how many people I would be managing, the CEO Rick Deal told me I was it,” says Jones with a chuckle. “So I literally delivered mail for the first months of my job.”

During this time, Jones also enrolled in law school, taking night classes with the intention of becoming a lawyer. After two years, however, he couldn’t continue the courses and decided to drop out, believing he could pick up again if a career in banking did not work out for him.

PEOPLE ARE AT THE CENTER of nearly all that Bob Jones does and what he takes most pride in. What does he most enjoy about the banking industry? The people who are clients of the bank. What is the most rewarding aspect of leading Old National for him? Seeing the growth of his staff and the impact they have on the community. Why is he so involved in philanthropic organizations? Because it betters the people and community around him. 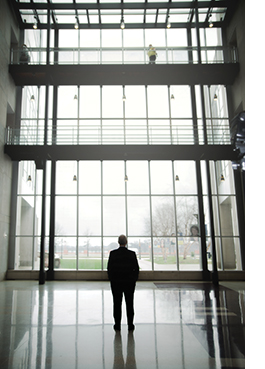 “He is the truest of leaders,” says Ben Trockman, disability and inclusion specialist at Old National. “Our mentoring relationship has indeed helped empower me with the tools to better myself and others around me.”

“I’m blessed to work for a company that believes we’re only as strong as the community that we serve,” says Jones. “I would characterize my passion is to make Evansville the city it knows it can be. I happen to believe we can be as great as we want to be. We just have to believe in it.”

A common thought among employees, friends, and colleagues of Jones is how he makes time for all who ask for it. Whether as a soundboard for ideas, advice on a course of action, or help with fundraising efforts, Jones is quick to offer his support.

Schoettlin describes Jones’ compassion as such; when he sees a need, he is ready to offer a hand.

“I think Bob would be too humble to acknowledge how much weight his opinion really matters in this city,” says Evansville Mayor Lloyd Winnecke. “Bob is known as a thoughtful, open-minded, and respectful leader, so when he offers an opinion, or a piece of advice, people from all walks of life take notice.”

Projects profiting from Jones’ support, volunteering, ideas, and influence range across the board — the Lampion Center, DoubleTree by Hilton, and the upcoming construction of a new Downtown YMCA are just a few.

“The entire Y project started with Bob and I meeting for a cup of coffee,” says Stewart. “It led to a conversation about Regional Cities and has resulted in a project that will be transformational for our organization. Bob’s fingerprints will be on this community long after his service concludes.”

Winnecke has not been shy about utilizing Jones as a soundboard for various issues, he says. His willingness to listen and offer perspective as well as his approach to leadership and collaboration have been aspects Winnecke says he tries to emulate.

“I hope Bob plans to work for many more years because his mere presence in the city, whether it is at a fundraising event or a social occasion, lends greater credibility to the experience,” he says.

Mentoring others is a huge part of Jones’ impact as well. Schoettlin remarks on his constant meetings with employees and members of the community.

“He speaks a lot about his mentors, but I know he meets with people continuously,” she says. “He encourages all of us and has had a tremendous impact serving as a mentor.”

For Trockman, that mentorship goes deeper than others — after meeting with Jones during his senior year at University of Southern Indiana, he found himself presented with a job.

“Bob has helped me stay humble, while simultaneously allowing me to dream my craziest dreams and challenge myself,” says Trockman. “He has helped me understand the importance of leadership, which he himself exemplifies each day.”

To Jones, life is about living by a philosophy his grandmother passed on to him — “At the end of the day, you’ve got to be able to put your head on the pillow and say you did everything you could do that day,” he says. All in the all, the goal is to pay it forward.

“I think if I had one hope, it would be the dream for people in the Midwest to say ‘Wow, if you want to see how it’s done right, go to Evansville,’” says Jones. “I want us as a community to not have to aspire to be somebody else, but for other people to aspire to be us.”

For more information about Old National, call 812-464-1425 or visit oldnational.com.