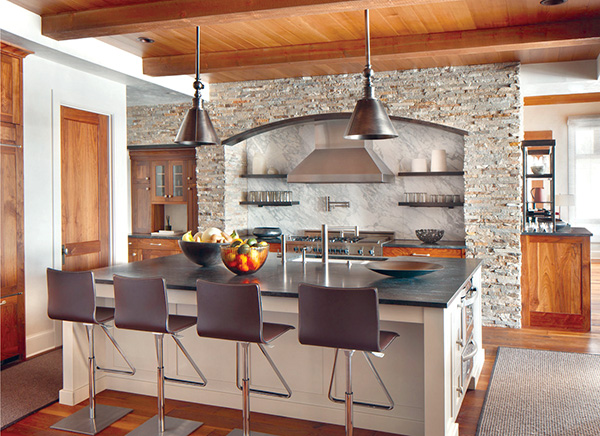 Pete Popham, an Evansville native and owner of Popham Construction, knew being a schoolteacher wasn’t his life’s work. It wasn’t until he returned to Evansville after teaching out of town, teamed up with a skilled carpenter, and began taking on construction work that he realized he had found his calling.

Popham says while he wasn’t particularly knowledgeable in carpentry work when he began, he was a pretty good salesman. The business grew from there and this year celebrates its 40th anniversary.

“It has grown from a pickup truck and one employee to many trucks and 22 employees,” says Popham.

Over time, he has kept the same philosophy from the beginning — whatever he did, he was going to do it well.

He hasn’t looked back. The employees at Popham Construction work under this philosophy, too. Popham and his crew pay immense attention to detail to complete their goal of perfect projects, whether it is the installation of a storm door or a $10 million project. The most popular services today are home additions, bathroom and kitchen renovations, porches of all types, and commercial office renovation — which the company has done numerous of each in their 40-year history.

After meeting his wife Debbie, who gave up her teaching career to join the business, Popham says they built a business based on their commitment to customer service, with the best part being taking someone’s ideas and making it a reality. The two live by the belief “the customer is always right,” and even though there are problems in the industry, it is how those problems are dealt with that set businesses apart.

“I don’t recommend it for anyone unless they are committed to dealing with a lot of long hours and a tremendous amount of details,” says Popham.

Although it can be a tough job, he has had the same people by his side from the beginning. Some of the employees have been there for more than 30 years.

“The people who work here are really quality people,” says Popham. “They come, and they stay, we don’t have turnover.”

Despite being in the business for so long, Popham includes working on a list of hobbies. While he enjoys golfing, being a pilot, and serving on the Better Business Bureau Board of Directors and the Board of Directors for the Evansville Airport Authority, he simply loves to work. In addition, both he and Debbie try to be as philanthropic as possible, mainly advocating for animal rights.

“I always had this philosophy: if you knew your subject matter and you were honest, you would do well. That philosophy has carried us to where we are today,” says Popham.

For more information about Popham Construction, call 812-479-5850 or visit pophamconstruction.com

Lighting up the Town