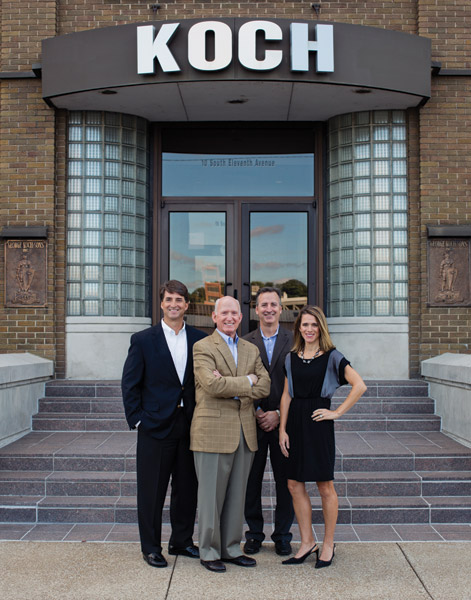 Bob Koch is the Chairman and past CEO of Koch Enterprises, a global, diversified, privately-owned corporation. The business has been in the Koch family since his great-grandfather George founded it in 1873. He also is the president of the Koch Foundation and Signature School and a board member of the Indiana Economic Development Corp. He is past chairman of the University of Evansville, the Indiana Chamber of Commerce, and the Catholic Foundation of Southwestern Indiana. He has served as a director or board member for several public companies, including Vectren Corp., Fifth Third Bancorp, and numerous local non-profits. He helped start the Community Foundation Alliance and the Evansville Regional Business Committee.

Koch’s family also is active in the business. Son Kevin Koch is the president and CEO of Koch Enterprises, brother-in-law Jim Muehlbauer is the vice chairman, son David Koch is the president and CEO of Brake Supply, and daughter Jennifer Slade is the Secretary of the Koch Foundation. In addition he has a son-in law, two nephews, and two husbands of nieces working in subsidiary companies.

Your family history is an interesting story. Can you comment about that heritage and your family’s background?
Five generations ago, George and his father, mother, and eight other siblings, left Germany to come to the U.S., in 1843. The family ran a winery over near Mainz, Germany, and that winery is still in business. They built a building in 1820, and our cousins still live there and make wine in it today. We’ve been to visit with them a couple of times, and they’ve come here a couple of times.

Your name is synonymous with education in Evansville. What drew you in that direction?
It was in the mid ‘80s when our children were graduating from high school. We counted that in their last six years of school, school had been cancelled about 90 days because of bad weather and there were no makeup days. At the same time our companies were experiencing higher scrap and rework costs because of simple errors in math and communications. If we were going to get better in our companies, our schools had to do better. We started by forming a Business-Education Committee, which new Evansville Vanderburgh School Corp. Superintendent Phil Schoffstall and I co-chaired. Local businesses worked with the school corporation to reduce the numbers of students taking minimum requirements for graduation and get students to take more advanced classes.

You serve as the president of Signature School and its science center bears your name. What was your goal with getting involved there?
Phil Schoffstall and the EVSC school board had a retreat in which they came up with the idea of Signature School. The school would be part-time, located Downtown and would offer advanced classes and be available to juniors and seniors from all area high schools. To attend you had to sign a promise to try to do your best at this school. We were trying to raise the bar by making school, while rigorous, also exciting, fun, and engaging.

Some in the local “education establishment” later tried to close the school. What was the reasoning at the time?I’m not sure. It was not what I expected. But about that time, the State Legislature passed a new law enabling charter schools. And the parents and teachers asked if Signature could become a charter school. And that was the start of it, about 12 years ago now. Signature now has 330 students and is at capacity. Signature would like to expand but we rely heavily on local donations to operate the school. Charter schools receive only about 66 percent of the funds that traditional public schools get.

What is your role with Koch Enterprises today?
Today I serve as chairman and senior advisor. Also when I had ultimate responsibility for the company, there wasn’t much time for me to do creative work on our products or processes. But with Kevin taking charge, I’m back doing creative stuff.