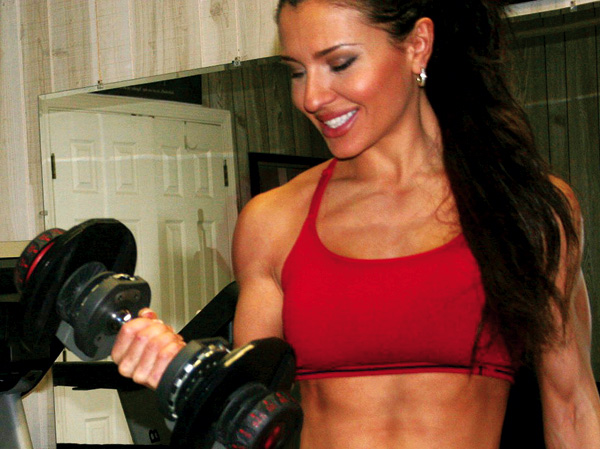 At age 22, Iryna McCraw came to the United States from Eastern Europe to pursue bodybuilding. Why would a young, beautiful Russian woman — now 31 — choose to bulk up? Simply put: “It’s what I like to do,” she says. Her late father, Vladimir Degtyarov, was an Olympic gymnast for the Soviet Union in the 1960s, and he passed on his athletic ability and determination to his daughter. It showed last November, when the Madisonville, Ky., resident won the Kentucky Muscle figure championship, a well-known bodybuilding competition in Louisville.

She was no stranger to the event; she won third place in 2004, sixth in 2005, and second in 2007. Last fall, McCraw “wasn’t worried,” she says. “I was going in with total confidence.” As the winner, McCraw qualified for the prestigious Arnold Amateur, an international competition in Columbus, Ohio, the first weekend of March. It’s part of the Arnold Sports Festival, which draws 17,000 athletes each year to compete in 40 events.

The event’s name comes from Arnold Schwarzenegger, who popularized the sport of bodybuilding before becoming a movie-star-turned-governor. “I guess it’s my little Russian dream to be by the ‘Terminator,’” says McCraw. (The winner is photographed with the Governator at the men’s Arnold Classic finals.) McCraw, who competes in the “figure” category of bodybuilding that tests the contestant’s build, looks, and overall presentation, will face some of the world’s most muscled women with the same goal.

McCraw’s training begins eight weeks before a competition, and her daily routine consists of 30-40 minutes of morning cardio, midday weight lifting, and 30-40 minutes of evening cardio. Her routine varies: “All exercise works,” she says. “The main key is to eat healthy, though.” She consumes small portions eight times a day, every two hours to keep her metabolism going. McCraw eats no sweets, wine, pasta, or cheese. She drinks water often and takes supplements and vitamins.

Prior to competition, though, McCraw has a “dry-out week,” she says. She eats more food, drinks less water, and rests more. On competition day, McCraw eats dry oatmeal and rice cakes because it absorbs water from the body. “I should eat more,” she says, “but I worry.”

McCraw’s family calms her nerves, she says. Her husband, Ron, who owns Evansville’s Thomas Kinkade Signature Gallery, and son, Daniel, 8, cheer her on in the audience. “He is always there,” says McCraw, “saying, ‘Go, Mom!’”

For more information on the Arnold Sports Festival, visit www.arnoldsportsfestival.com