Bring Out the Wurst 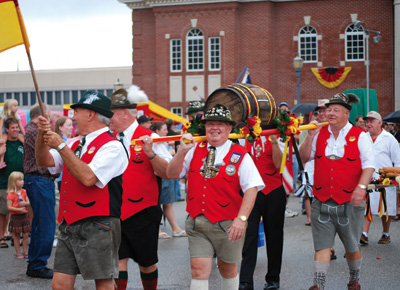 In Southwest Indiana, we eat like Germans. (Join the weekend crowds at the Gerst Bavarian Haus, a popular West Side restaurant.) We name our streets like Germans — and we secretly love hearing newcomers bungle “Boeke” and “Schutte.”

Every August, we party like Germans. Why August? Organizers swear it’s pure coincidence. Here’s a look at three of the region’s most beloved festivals and their polka-dancing, bratwurst-eating, beer-drinking patrons.

By the mid-19th century, four out of 10 Evansvillians were born in Germany or had German-born parents. In 1900, local residents founded Germania Mannerchor, a social and singing club that still is active. At its North Side clubhouse, the group hosts Volksfest (“festival for the people”), which this year celebrates its 50th anniversary. The main attraction, says Germania’s Jim Kluesner, is the food: kraut balls, pig knuckles, and bratwurst, all made from scratch. Also on the scene are live polka bands, dancing, and plenty of men in lederhosen.

In Jasper, Ind., school was taught in German until World War II, and many families spoke German at home. Every summer, the town’s Deutsch-loving denizens celebrate their heritage at Strassenfest (German for “street festival”). The festival draws around 30,000 visitors for events such as athletic competitions both silly and serious, polka masses (a Roman Catholic service with religious music set to a lively beat), and a beer garden playing nonstop German tunes.

The festival’s moniker may pay tribute to Tell City, Ind.’s namesake (legendary Swiss hero William Tell), but “it’s more of a town reunion than a German or Swiss-German festival,” says chairman Ken Roland. With a talent contest, a carnival, and a beer garden whose patrons rock out to country or classic rock (not polka), the Schweizer Fest is all-American fun. Similar to Evansville’s Fall Festival, local clubs, schools, and nonprofit organizations sell food to raise funds. “We’ve tried the German foods,” Roland admits, “and they just don’t go.”

Grill Out and About