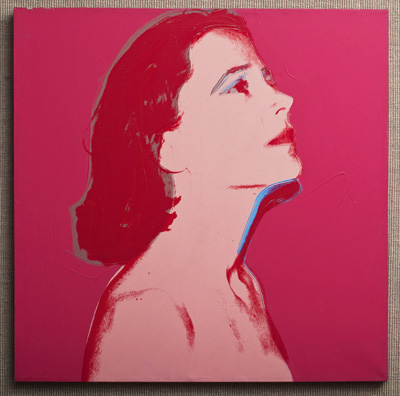 On the second floor of the Evansville Museum of Arts, History and Science hangs an eye-popping work of art: a fuchsia-toned, 40-by-40-inch portrait of a woman in her thirties. The synthetic polymer paint and screenprint canvas is signed and dated by Andy Warhol, who earned fame for his pop-art depictions of wildly diverse subjects: Campbell’s soup cans, Mickey Mouse, Marilyn Monroe, and others.

The painting, “Portrait of Carol Owen Coleman,” is displayed at the Evansville Museum on a long-term loan from the Coleman family, now residing in New Orleans. The portrait’s subject is the late daughter of Kenneth and Jane Blaffer Owen, a prominent New Harmony, Ind., couple. Kenneth was a descendent of Robert Owen, a Scottish industrialist who founded New Harmony’s utopian society. Jane, who passed away in June 2010 at age 95, was a preservation powerhouse and cultural leader who oversaw construction of New Harmony’s Roofless Church and Atheneum, the restoration of the Rapp-Owen Granary, and other community projects.

The Coleman family commissioned the portrait in 1976 through Fred Hughes, Warhol’s business manager and a friend of Carol’s. The Evansville Museum’s piece is part of a four-part series; the remaining portraits of Carol hang in the Andy Warhol Museum in Pittsburgh (Warhol’s hometown) and in a private collection in Milan, Italy.

Having an original Warhol boosts the prestige of the Evansville Museum, whose permanent collection also includes pieces by modern masters Georgia O’Keeffe and Edward Hopper and French Impressionist Pierre-Auguste Renoir. The Evansville Museum also is listed in the forthcoming Volume Four of the Andy Warhol Catalogue Raisonné, a scholarly project that attempts to document Warhol’s prolific work. Each volume of the catalogue, compiled by the Andy Warhol Foundation for the Visual Arts, includes detailed descriptions of ownership, whereabouts, and other attributes. Owning a catalogue, much less a piece of Warhol’s work, is prestigious — the volumes carry price tags of up to $700.

“We are delighted to have this on loan from the Coleman family,” says Mary Bower, the museum’s curator of collections. “Warhol’s an important American artist, and with our community tie with the subject of the painting, it certainly is unique.”