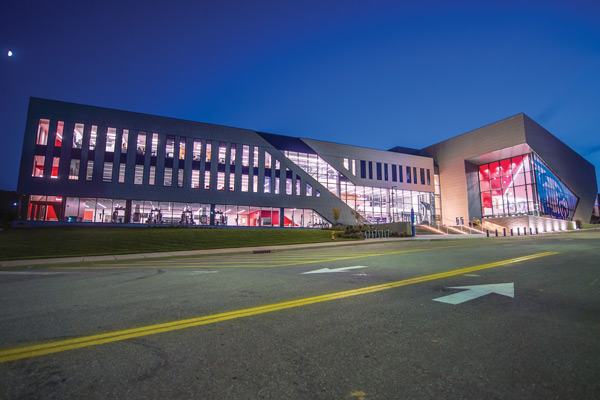 Loud and proud, fans cheer for the University of Southern Indiana’s volleyball and basketball teams from the 4,800 seats in the 90,000-square-foot Screaming Eagles Arena that opened April 4, 2019. On the third floor of the attached building, sprawling toward the edge of campus behind the arena, athletic director Jon Mark Hall reviews game schedules in his office. On the second floor, kinesiology and sport students run a hands-on trial in the 3,800-square-foot human performance lab, while the softball team trains in the weight room on the first floor.

This level of simultaneous activity was not possible a mere five years ago when USI filled in its old pool to build the arena and started planning for the Screaming Eagles Complex, which officially opened Sept. 16, 2021.

“If we had a game in this building, it pretty much shut everything down because of the noise and the volume of people,” says Hall. “But now, you can have a game or an event in the arena and you can still have a class, still have intramurals going on over here.”

A total of 110,000 square feet, the Screaming Eagles Complex is a three-story multi-functional facility, including the attached Screaming Eagles Arena. Made up of renovated spaces inside the previously existing Physical Activity Center, and 35,000 square feet of new construction, the $38.5-million project was state funded and includes the adjacent aquatics center.

Home to the athletics and kinesiology and sport departments, Hall says the complex was a long-awaited project that took the collaboration of primary contractor Empire Contractors of Evansville, architects from St. Louis-based CannonDesign, engineers from Hafer of Evansville, 25 subcontractors, and on-campus influences.

“Our director of the physical plant Jim Wolf, who oversees all of our building construction, came to the room and he said, ‘We’re going to start with this — what would you dream of? Let’s go ahead and start all the way at the top, and then we’ll work our way down.’ So, that’s what we did,” says Hall.

Connected to the courts through a shared wall, the 6,000-sqaure-foot weight room was inspired by the athletics department’s visits to training facilities at Indiana University in Bloomington, Indiana; Indiana State University in Terre Haute, Indiana; and Vanderbilt University in Nashville, Tennessee, during planning.

The weight room includes cardio machines, a 90-foot-long and 14-foot-wide turf training area, and dumbbell racks with more than 7,000 pounds of weight plates. Eight Base Camp Uber Racks by South Carolina-based Sorinex include EliteForm Power Trackers with two fixed sets of cameras and a mounted tablet for video playback of each set and data on peak bar velocity, average bar velocity, and power output. Outside, a digital schedule shows the weight room’s availability.

While the athletics department has spaces across USI’s campus such as the soccer field, baseball and softball fields, and tennis courts, Hall says the complex is the department’s home base.

“We preach that it’s not about winning all the time; we want to do it the right way. One of the reasons (our student athletes) come here is they want to perform at the highest level they possibly can perform at,” he says. “I think (the complex) helps their overall wellness, it helps their overall ability to perform at the levels they want to perform at, and I think it’s a definite sense of pride for what they do. It also makes our student athletes feel really important. It makes them feel like they’re an integral part of the university and the student life.”

Before construction, only basketball and volleyball had locker rooms in the building. Now, their lockers are in the arena, and soccer, cross-country and track, baseball, and softball each have fingerprint-accessible locker rooms inside the student athlete lounge across from the old courts. The lounge also gives access to the arena and a private study/break space.

Hall and his colleagues are in the athletics department offices on the third floor, with the kinesiology and sport offices across the hall. Both departments share the floor with conference rooms, break rooms, a walkway overlooking the court and the human performance lab, and the Athletic Team Room equipped with 40 theatre-style seats for press conferences, team meetings, and more.

“For us in athletics, the space is just transformative,” says Hall. “And for our kinesiology and sport faculty and staff … for them to recruit prospective students that want to be (those) majors now they have a home and one they’re really proud of.”

The focus on multi-functional spaces combined with appealing design details that drove the project continues outside the main facility. On the north side of the building, The Screaming Eagle Sculpture designed by emeritus faculty John McNaughton and Joan Kempf deJong stands at 12.5 feet tall and weighs 42.5 tons.

On the opposite side of the building, the Recreation, Fitness, and Wellness Center is adjoined to the 25,000-sqaure-foot Aquatic Center. Opened in October 2021 and overseen by the athletics department, the pool is made up of eight competitive lanes, three warm-up lanes, and bleacher seats with a 285-person capacity. Two diving boards and a diving platform perch on the end of the pool near the main video board and hot tub.

“One of the key things … is the pool was built for students, faculty, and staff,” says Hall. “The swimming and diving program that’s going to start next year is just kind of a byproduct.”

USI hired Cameron Kainer, previously head coach at the University of Alaska Fairbanks, as the swimming and diving head coach on Aug. 16, and he has since been recruiting athletes so that the programs can kick off next season. Both teams will operate in the NCAA Great Lakes Valley Conference Division II with USI’s other sports, but among the added comfort and accessibility the new complex has brought to its residents, the project may be a key step in expanding athletics itself.

On Sept. 27, 11 days after the complex’s open house, USI President Ronald S. Rochon (who was inaugurated as USI’s fourth president only one day after the arena officially opened in April 2019) sent an internal press release to USI students, faculty, staff, retirees, and alumni announcing an exploratory review into the feasibility of a move to Division I sports. Aligning with Rochon’s 2021-2025 Strategic Plan: Accelerating Impact, the review does not consider the possibility of adding a football team, but examines the fiscal and facility requirements, among other factors, of changing divisions.

“USI has a tradition of being a daring athletic competitor and now is the time to consider where we go from here,” says Rochon.

The exploratory committee updated the USI Board of Trustees with their findings at their Nov. 4, 2021, meeting, but no further announcements will be made until the spring semester after the committee finalizes reports for Board level review. Yet every night the gleaming Screaming Eagle sculpture reflects the bright lights from inside the complex across campus, a symbol that the university’s athletics now have the tools and facilities they need to face whatever progress lies ahead.