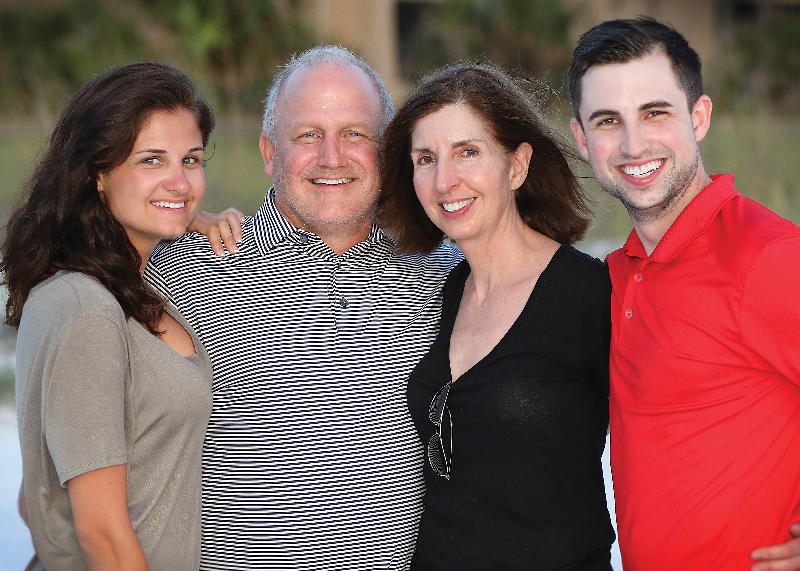 If you didn’t have the pleasure of knowing Kim Howard, you at least knew of or were impacted by her work.

The regional director of the Southwest Indiana Small Business Development Center worked with the Southwest Indiana Chamber of Commerce, taskforces established by Mayor Lloyd Winnecke, and more. Known as a trusted advisor to her coworkers and a role model to her family, Kim dedicated her life to positively shaping Evansville’s business landscape.

On March 13, 2021, Kim passed away after battling a glioblastoma (the most aggressive type of brain tumor in adults) for seven months.

“I’m an unabashed supporter and cheerleader for my wife,” says Chris Howard, Kim’s husband. “Kim was a very strong person. As I got to know her, I realized how smart, how generous, and just what a great thinker she was.”

While day-to-day operations continue, Kim’s death has left a notable hole in Evansville’s business community — a testament to her impactful work and legacy her coworkers, friends, and family now celebrate and share. Kim was born on April 26, 1957, in Indianapolis. While it’s clear now that she was built for business, her life began on a musical track.
Kim and her sister Leslie, who come from a family of musicians and conductors, were once selected for the McDonald’s Marching Band — a national band made up of two young musicians from each state.

She was talented at many forms of music, but it was the clarinet that earned her a full-ride scholarship to Butler University in Indianapolis. Eventually switching her major to public speaking and business management, Kim became another in a long line of Butler alumni after graduating in 1979.

Two years after receiving her master’s degree from the University of Evansville in 1985, Kim met with a friend who worked at the Cork n’ Cleaver restaurant and was introduced to the new manager, Chris Howard. The Kalamazoo, Michigan, native had recently transferred to Evansville’s Cork n’ Cleaver from Lexington, Kentucky.

Eight months after meeting, Chris was on one knee in the restaurant surprising Kim with an engagement ring perched atop her usual order of king crab.

“We were married in 1988. I floated the idea after eight months of meeting her; I knew that I loved her,” he says. “I was then, and still am, the luckiest person in the world. I would not trade it for anything in the world, even the last seven months when I stayed home and took care of her.”

Chris and Kim built a life together in Evansville in their 32 years of marriage. They completely renovated their home of 23 years, created a luscious garden in their backyard, ate many delicious meals at home prepared by Chris, and raised two children.

Besides being an inspiration to 29-year-old Spencer, who works for Dell in Nashville, and 25-year-old Olivia, who works for the Chamber of Commerce in Bowling Green, Kentucky, Kim adored her two nieces and sat on the 4C of Southern Indiana board of directors.

“She is absolutely a hero and a role model to her kids,” says Chris. “She was always concerned about children and how they were being brought up to help them progress in life.”

To honor her memory, Kim requested donations be made in her name to 4C, a nonprofit childcare agency. This donation represents Kim’s commitment to her community which she displayed every day through her work. For 16 years, Kim worked at the Southwest Indiana Small Business Development Center as regional director. In this role, she supported small businesses and local entrepreneurs through industry resources, networking, and funding.

“I remember sitting in meetings with her and watching her interact with people in the meeting and being almost in awe of her,” says ISBDC office administrator Karina Hampton. “She organized a lot of programs that no one would really know that she did because she wasn’t an attention seeker.”

Hampton, who was hired by Kim in 2014, says Kim never asked for recognition for her work — in fact, she often forbid it. When Kim was named the 2017 ISBDC State Star, she specifically asked Hampton not to post her achievement on social media.

This wasn’t a surprise to those who knew her — Kim was a private person, happy to work quietly behind the scenes.

During the start of the COVID-19 pandemic, she continued to come to the office. She joined Mayor Winnecke’s Reopen Evansville task force and created the COVID information pages on the Chamber’s website.

But business wasn’t all covert for Kim. She couldn’t escape her due credit for founding programs such as the Family Business Alliance and Tri-State Manufacturers Alliance. Both alliances hosted by the Chamber offer networking events and quarterly speakers and panels.

The FBA sprouted from the collaborative efforts of Kim, strategy and leadership development consultant Kathy Kleindorfer, retired Harding Shymanski & Co. vice president Randy Schulz, and current vice president Shannon Brewer in 2013. Since then, the FBA has hosted 23 events and launched CEO and Next Gen peer groups, with Kim playing an integral role in the group’s logistics.

“Kim was a wonderful strategic thought partner,” says Kleindorfer. “She was highly skilled at pulling a diverse group of people together toward a common goal, as well as capable of navigating challenges as they arose.” Even with a full resume of successful projects, she wasn’t one to slow down. Kim played a role in the creation of UE’s Changemaker Challenges (a competition for high schoolers to submit innovation projects).

In 2013, she also crossed paths with Kelley Coures, executive director of the Department of Metropolitan Development, and the two signed an agreement between ISBDC and DMD to rewrite federal loan programs, such as the Community Revitalization Loan fund and the Economic Development fund, for small businesses.

Throughout 16 years of work, one thing stood out to all of her business partners. It wasn’t the successful initiatives or innovative ideas — it was Kim herself.

“She never said no — not one time — no matter what else she had going on,” says Coures. “Most of us go through our professional lives interacting with others in order to accomplish a goal or improve the machinery of government or business, and we work together with these folks sometimes for many years without considering them a friend. I always thought of Kim as a friend in whom I could put my trust and confidence. I will miss having her in my life.”

“She was a trusted advisor,” adds Hampton. “I just really miss her, we had great conversations. She wasn’t concerned about herself and she definitely did not take the credit.”

“She was an exceptional person and sometimes people tend to talk about somebody after they died in glowing terms, but I would’ve talked this way about my wife before — and I had,” he says. “I think you would’ve found that with everybody that she worked with.”