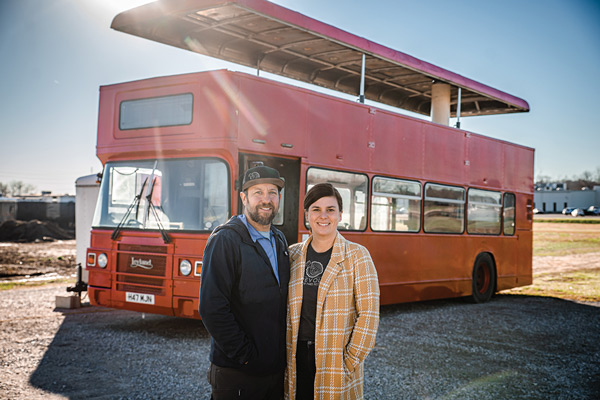 The type of oven used to cook a pizza often can make or break the Italian original, but most experts agree the wood-fired oven bakes the best dough.

If a wood-fired oven is your culinary equipment of choice, look no further than The Pizza Revolution.

Housed inside of a functional 1986 Leyland Olympian double decker bus, the custom-made brick oven was built by owners Stephanie and Aaron Peckenpaugh six years ago. It’s encased by three and a half inches of stone, then wrapped by another three and a half inches of fire blanket, insulation, and stucco. The Peckenpaughs also cut a hole in the second floor to install a chimney that funnels smoke out the top.

“Ideally, we want to run about 900 degrees on the floor and about 1,100 or so on the dome, so it’s like a broiler,” says Stephanie. “These ovens are designed so the chimney is actually outside the oven, creating a big convention. The flame rolls up the back of the oven and then out the chimney.”

In authentic Neapolitan style, seasoned woods such as white oak, hickory, and black walnut are fired toward the back of the oven to give each pizza a slight smokiness that enhances the flavor.

The hand-tossed dough is constructed with various toppings, including homemade tomato sauce and fresh mozzarella, and slid onto the oven floor. After about a minute and a half, the pizza is raised with a large spatula near the dome of the oven for a few seconds to bring the finished product to the perfect crisp.

The oven can hold up to six pizzas at a time, and The Pizza Revolution crew can bake about 120 pizzas in an hour.

Unlike a conventional oven, brick ovens require about four hours of heat to fully be ready to bake.

“You really have to have that heat all the way into the brick,” says Aaron. “Because if you don’t, you start putting that cold dough on the stone, and then it just sucks the heat out of the floor, and it won’t cook the bottom of the pizza.”