Evansville natives Dennis Walls and Kim Coslett had a hobby of touring properties during open houses, even though they were happy in their home in Newburgh, Indiana. One Sunday, they walked through a home in McCutchanville and fell in love.

“When we came in, there was a lot to do from top to bottom — painting, a lot of remodeling, and things we wanted to do,” says Walls. “But just the land, the property, the pool were attractive and seemed to fit.”

Walls and Coslett have been in the home, originally built in 1979, almost three years and, with Coslett’s background in interior design, have the property looking like they dreamed it would. Coslett, who owned Bassett Furniture for five years, says since closing her business she has become a “consignment store junkie,” collecting pieces like their basement coffee table, a cherry painting, a bench in the upstairs hallway, mismatched dining room chairs, and Jack Daniel’s barrels.

“There’s a giant oar in the pool house we drove home from Florida with in the car,” says Coslett. “The boys were not happy about riding home in the car with this giant oar.”

While Coslett’s and Walls’ kids may not like the process of finding these unique pieces, they love the outcome. The married couple has six kids — Chase, Anna, Thomas, Makensie, William, and Kelsey.

▲ Dennis Walls and Kim Coslett have been in their McCutchanville home for three years. During that time they have made extensive renovations to every part of the property, like adding a front porch, building out the master bedroom, and renovating the old storage garage into a pool house, left. Walls says his favorite area of the house, however, is the sun room. “It’s a seasonal window,” he says. “We can sit there and watch everything around us.”

“They told us we never can sell it,” says Walls. “I think they think someday it’s going to be willed to someone.”

“Oh, yeah. They all say don’t ever sell it,” adds Coslett. “Leave it to the family.”

Coslett says their kids are the reason behind many of their renovations and changes. The basement has two sets of floating bunk beds, billiard games, a bar and kitchenette, a bathroom, and a second washer and dryer for all of the kids’ college laundry.

“We’ve woken up on Sunday mornings where every bed has been filled,” says Walls.

“We can’t get a car out of the driveway,” adds Coslett. “But that’s the way we like it.”

Even with Coslett’s experience as an interior designer, the couple still needed help to complete the renovations, so they enlisted Thomas VanVactor, owner of Do-All Remodeling, to help with the project. 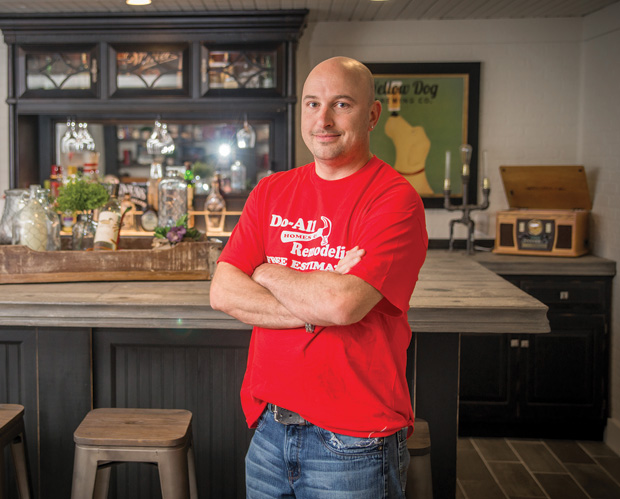 ▲ Thomas VanVactor, above, has been working in construction and remodeling for almost 20 years. “I’ve been interested in construction since I was a little kid,” he says. “I was watching ‘This Old House’ instead of cartoons. That always has been my passion — to build stuff and create.” Working with Kim Coslett and Dennis Walls allowed him to stretch his creativity and dig in to new projects, like converting the old storage garage into a pool house and remodeling the basement to include floating bunk beds.

“I knew I had an idea, and then it’s like every other idea leads to another idea,” says Coslett. “Then, Thomas came into the picture, and he had ideas. Dennis tries to be around when Thomas and I have ideas together, so he can say ‘no’ at first.” 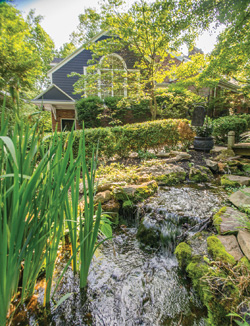 One project VanVactor specifically created for the home was a concrete countertop for the bar island in the basement. He and his team poured concrete on top of wood forms to give it the look of planks. They then stained the knots on the countertop to detail the wooden look.

The countertop was a first for VanVactor, who quickly learned creating the idea and executing the installation were two very different challenges.

“We poured this on the floor in the forms, and we were planning on lifting it in place, me and all my guys,” says VanVactor. “We couldn’t lift it, so I ended up getting jacks and concrete blocks and jacking it up to the right height. We put it on wheels and rolled it over.”

“I came down and saw them beginning to do it,” says Coslett. “I thought, ‘This is the day I need to go shopping and not come back for a while.’ When I came back, it was up and in one piece.”

VanVactor also custom created the built-in shelves and side tables in the basement along with renovating the old storage garage into a pool house using wood torn out from the second floor and repurposing it into the bar top, countertops, and ceiling beams of the building.

Even with so many different custom projects and renovations, Coslett worked hard to keep the look of the house consistent and cohesive. The French country house has a neutral white palette with pops of color in the design and furniture that carries throughout each room of the house, making each area a unique piece of a larger puzzle.

“When we sold our house and were moving here, Dennis had gotten most of the painting done,” says Coslett. “So we called all of our friends and invited them to come to our old house with their truck, pick up boxes, and bring the boxes here. We had a chicken fry on a Friday with lots of cold beer, and everybody carried in boxes. When they walked in and saw I had picked out white for everything and hadn’t hung anything or brought any furniture in, they were all kind of skeptical. But it worked.” 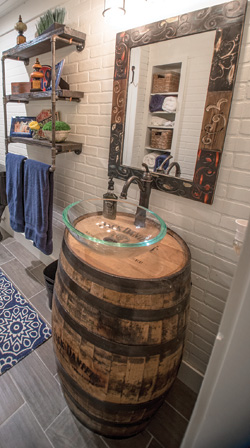 As for the future of the house, Walls and Coslett still say the house isn’t yet finished. There are renovations to the upstairs and master bathroom to be done and ideas continually brewing. The couple can’t talk about the house without new projects popping up.

“I was thinking about an arbor over the garage,” says Coslett. Walls isn’t convinced.

“A cupola on top of the garage,” she suggests. Walls agrees with this idea.

“That’s what I was going to ask Thomas about today — light posts coming down that drive,” says Coslett.

Coslett replies, “But I think it would be easy.”

“She thinks everything is easy,” jokes Walls.

Home renovations aside, the couple manages to stay plenty busy. This house was an opportunity for Walls, who works with Mead Johnson, and Coslett, who does independent interior decorating jobs, to work together on their own space.

“Kim’s background in furniture and as an interior designer come together on this house,” says Walls.

“I’ve always done it for everyone else, but I never got to do it to this extent for myself,” says Coslett. “So this was a real treat.”