The championship series for the 2016 Frontier League baseball season was tied at two games each when the Evansville Otters took on the River City Rascals Sept. 16, 2016, at Bosse Field. By the end of the night, the Otters hoisted the championship trophy for the second time in franchise history.

It was a win that showed the Otters still know how to take the River City out to the ball game.

“We had a good year last year, so I’m really hoping the team continues to build and grow,” says Otters outfielder John Schultz. “Last year was my first championship in professional baseball, and I’m looking forward to defending that championship and having the opportunity to repeat it. So we’ll see where we go from here.”

After last year’s winning season, five of the Evansville Otters were given the opportunity to sign with a Major League organization. 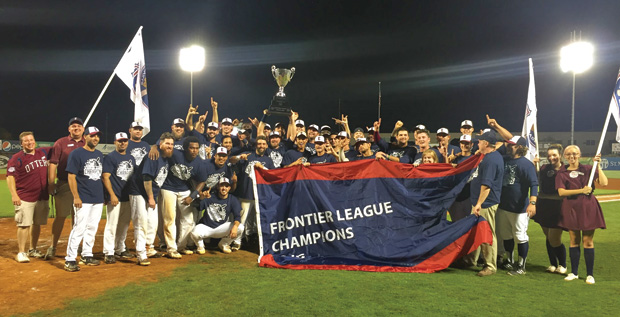 ▲ Andy McCauley helped lead them to a Frontier league win in 2016 at Bosse Field, above. Outfielder John Schultz, below left, will play his fifth and final season with the Otters this year. Third photo below, rookie outfielder Brandon Soat joined the Otters after graduating from Indiana University — Purdue University Fort Wayne. Below right, infielder Josh Allen marks his fourth season with the team in 2017.

“When you can sit down with a player and tell them their contract has been purchased by an organization, that’s special,” says Evansville Otters manager Andy McCauley.

Throughout his managerial career, McCauley has moved eight of his players on to the big leagues. He has led the Otters for seven of their 22 seasons in the Frontier League. During that time, there has been change since he first arrived, he says.

“It’s been a slow progression, but a progression,” says McCauley, who has been with the team longer than any previous manager.

When asked what has contributed to the team’s success, McCauley credited Evansville Otters owner Bill Bussing and his dedication to the team.

“A lot of it is the commitment from the ownership, the Bussing family, which really has added to the ability to retain players and get them to come back from year to year, like Sweeney and Schultz and Allen, and the ability to draw new talents, like Soat and Cummings,” says McCauley.

The Bussing family, who has owned the team for almost two decades, strives to make Bosse Field an environment where everyone feels welcome.

“We try to treat everyone there as though he or she were a guest in our own home,” says Bussing.

Although the team has struggled after losing a majority of its pitchers from last year, there are quite a few returning players, like Schultz. 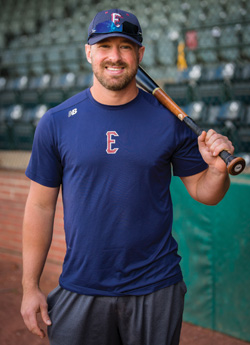 The outfielder, who will play his final season with the Otters this year, says he plans to continue last year’s winning season into this year.

“It’s just a matter of continuing to work hard and not get complacent,” says Schultz. “Just making sure you’re out here every day doing what you need to do to help the team win and be prepared.”

Rookie outfielder Brandon Soat is ready for the challenge. Soat, who recently graduated from Indiana University – Purdue University Fort Wayne feels he already has improved since joining the Otters. He adds he is looking forward to gaining even more experience throughout the season.

“We played around 50 games in college, and now it’s almost every single day we get to play games,” says Soat. “So it’s fun to spend a lot of time around these guys and get to know them and learn from guys like Schultz and Allen.”

Although most days are spent out on the field during the season, in the offseason, the players work a variety of jobs to make up for the time they aren’t in Evansville playing baseball. Schultz, who spends his off seasons at home in Reading, Pennsylvania, has worked a number of jobs when not in Evansville.

“I’ve worked anywhere from a meat stand called Hickory Farms one offseason — I got to wear the bonnet and the gloves and all that cool stuff — to customer service for a sporting goods company,” he says.

He also spent some time overseas in Australia, where he had the opportunity to play at both the local and the professional level. This past year, he was a hitting director, allowing him to run programs for around 15 junior league teams. 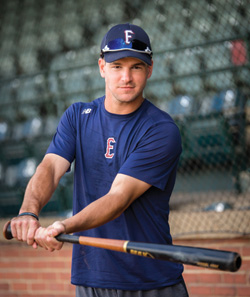 Josh Allen, Otters infielder and Schultz’s roommate during the season, goes back to his home in Lakeland, Florida, where he works both at his family’s ranch and in private security.

Moving back to Evansville at the start of each season can be hard for the players, but they all agree the relationships they have made and the opportunities baseball has provided them makes it all worth it.

“It’s a good opportunity to interact with the fans, the other players, people from all over the world,” says Schultz. “I wouldn’t have been able to travel to other parts of the world without baseball as a platform to go on.”

The relationships the players have formed throughout their time with the Otters are unlike anywhere else, they say.

“You know, whenever people give up baseball it’s not really the game you miss, it’s the clubhouse you miss,” says Allen, who is playing his fourth season with the team.

He adds it isn’t just his love of baseball that keeps him returning to the Otters each year, but the relationships he’s made while playing. 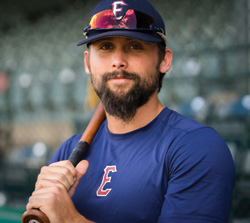 “So during the offseason you leave, you go home, you get away from those guys, but whenever January or February comes around we all start getting in contact with each other and start getting excited,” he says. “When you hear other guys are coming back it makes you want to come back.”

Whether it is the game, the relationships formed, or the history of Bosse Field, everyone agrees the Evansville Otters have something special.

“There’s a good feel at the ball park, a good vibe,” says Bussing, “You can tell when people are having a good time, and they seem to be. We want people to have such a good time they can’t wait to come back.”

For more information about the Evansville Otters, call 812-435-8686 or visit evansvilleotters.com.