Evansville and its trees are celebrating a big anniversary this year. It is the 20th year the city has participated in the Tree City USA program through the Arbor Day Foundation. To celebrate, 20 trees were planted on March 27 for the 20th anniversary in 2020 along Lincoln Avenue in the State Hospital Park, along with another 80 trees planted throughout the park.

To be a Tree City USA community, the city must have a tree board or department, have a community tree ordinance, spend at least $2 per capita on urban forestry, and celebrate Arbor Day. According to City Arborist Shawn Dickerson, one of the biggest issues in Evansville before joining the program was tree topping, when all the major limbs of a tree are cut from the top leaving blunt ends.

“People have told me, since the establishment of this program, topping still happens here and there, but it has reduced considerably from what it used to be,” he says. “Other than cutting a tree down, topping is one of the worst things you can do to a tree.”

The ultimate goal for the community is to increase the tree population up to 40 percent canopy coverage. A study completed in 2011 by the Indiana district forester and Davey Resource Group found Evansville had 26 percent canopy coverage. To help reach this goal, the city has a target to plant two trees for every tree removed. Evansville has exceeded that benchmark since 2001, planting almost three trees for every tree removed.

“I was told a few years ago by the state urban forester that we are the only community in Indiana that knowingly is planting more trees than we are removing,” says Dickerson. “That is a huge accomplishment.”

Dickerson also estimates Vanderburgh County is home to a third of all the state champion trees in Indiana, like the state champion cherrybark oak tree at the State Hospital Park. For community members wanting to boost forestry in the area, the city hosts volunteer tree planting events throughout the year, offers memorial tree programs to sponsor or plant trees in memory of loved ones, and encourages participation in the Adopt an Ash program to combat the invasive emerald ash borer pests.

“Trees clear air, they cool our communities, they make our community a healthier, more attractive, and beautiful place to work, live, and play, and that’s really what makes it all that much better to live here and makes this community a greater place,” says Dickerson. 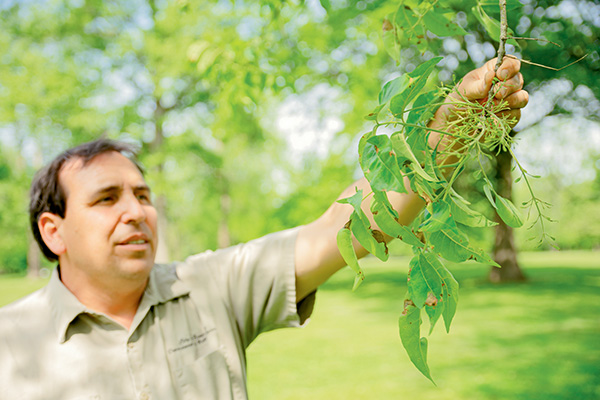