The view when driving into Downtown Evansville on Veterans Memorial Parkway is looking quite different. To the left, massive changes to the Evansville Water & Sewer Utility’s infrastructure are underway. While on the right, upgrades to Bee Slough have changed the area’s landscape. 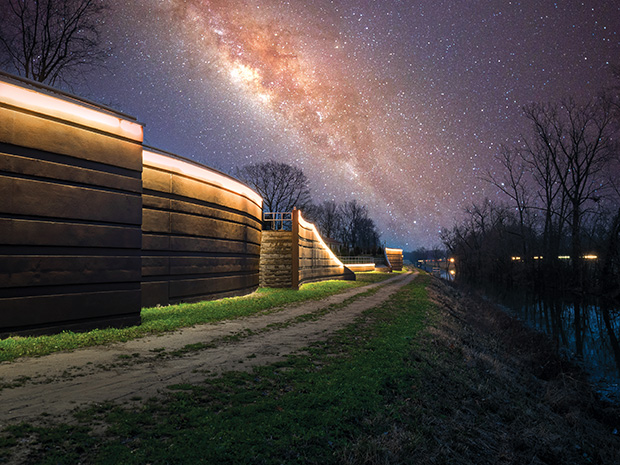 Work on Bee Slough, a concrete-lined and uncovered ditch which collects water until it can be pumped into the Ohio River, began in 2017 and finished at the end of 2018. A pipe was placed underground to drain Bee Slough during a combined sewer overflow due to large amounts of rain, which helps address the foul odor that welcomes drivers entering the city via the parkway. A retaining wall also was added, with public input on the design, to provide space for a road to access the pipe for future repairs.

“We chose to build a wall that looks very attractive coming into town, because that’s a major thoroughfare coming into Downtown Evansville,” says Allen Mounts, director of EWSU. “The wall is wavy to represent the flow of water, and there are sections that are open to allow wildlife traffic to move around. It has a feature at night — it’s lit. It makes a very attractive entrance.”

Across the street, one of the most visible changes was the creation of a new intersection along Veterans Memorial Parkway after relocating Waterworks Road late last year. The relocation project is just part of a $59-million endeavor to replace pipes underneath the former Waterworks Road and build a new pumping station that can process up to 40 million gallons of water a day. The new pumping station also is part of efforts to comply with the federally mandated Clean Water Act, which was agreed to by the city in 2011 to reduce the amount of combined sewer overflows.

The new pumping station, called Sunrise Pump Station, will feature a cascade where the treated, clean water flows into the Ohio River, laboratory space, and public access areas. EWSU also will begin work in the future on wetland technology to treat and disinfect sewer overflows coming from Bee Slough. When completed (in the 2023-2028 timeline), the project has the potential to be the largest constructed wetland in the U.S. Sunrise Pump Station, however, will be completed at the end of this year or in early 2021.

“The new Sunrise Pump Station and cascade outfall will be a very attractive amenity along the Greenway,” says Mounts. “Our hope is that it will actually be a destination — a place where people want to go, have a picture made, and enjoy the Downtown riverfront.”

From Caveman to College