Along historic Jennings Street in Newburgh, Indiana, sits one of the town’s newest businesses: a pub where residents can enjoy music, comedy shows, and a refreshing cocktail.

“We grow our own herbs here — rosemary, mint, basil, cilantro,” says bartender Terra Meyer. “I think it adds an extra layer to our cocktails and makes us sustainable. If I need mint for a customer’s drink, I can go outside and pick them right off the plant.”

Jennings Street also makes its own syrups and squeezes its own juices, making freshness a key to menu.

Opened just over a year ago, Jennings Street Public House occupies the space formerly leased by The Tin Fish at Jennings Station. Owners Nick and Lauren Burch originally planned to take up just the basement, but when the art gallery upstairs moved out, they renovated the space into the bar it is today. The downstairs space is still used for comedy shows, open mic nights, and private event rentals.

The upstairs walls are lined with work from local artists with all proceeds from purchases going directly back to the artists.

The bar also hosts live music every Friday and Sunday with local musicians and bands such as Angel Rhodes, The Honey Vines, and Cynthia Murray often making appearances. While Jennings Street does not serve food, patrons are welcome to bring in their own food or have it delivered. On nights with live music, food trucks are brought in for customers. 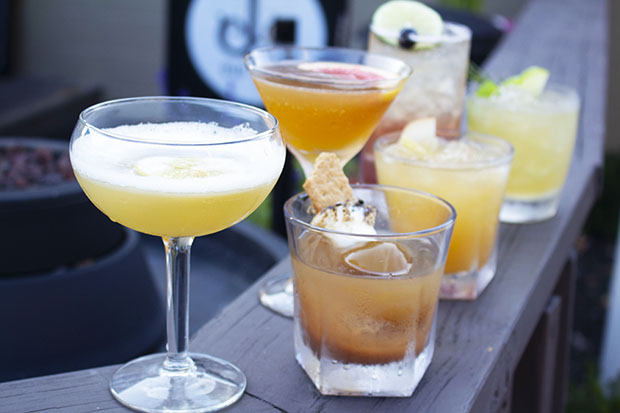 “We switch out our cocktail menu about every season, and it’s mostly composed of ideas from (General Manager) Nate (Cavender) and Terra,” says Lauren Burch. “Each weekend, we also have three featured cocktails and a shooter.”

If patrons aren’t craving one of Jennings Street’s specialty cocktails, the bar also has a wide selection of local and regional craft beers and eight rotating draft taps. They also have more than 100 bottles of liquor, including a variety of rare whiskeys and bourbons.