Before the sun fully rises each morning, Evansville Police Department Sgt. Tyrone Wood and officer Paul Harper are already feeding, brushing, bathing, and loading their horses onto their trailers. By 10 a.m. Wood, Harper, and their four-legged partners are badged and monitoring the streets as the Evansville Police Mounted Patrol.

Established in 2015, the Mounted Patrol made its first appearance with Wood and his 15-year-old draft-cross horse Blondie at the Christmas parade on Main Street that year. Blondie stands 17.1 hands tall (the unit of measurement for horse height; Blondie’s height is 69 inches) and was purchased from Louisiana’s Angola Prison equine breeding program in 2015. Harper currently rides the newest “officers” in training, CJ (16.1 hands) and Scotty (16 hands), both nine years old.

“I had the knowledge and what I hoped was a skill set to ride horses,” says Wood. “I love talking to people, and so I thought being able to have that passion for horses and then that passion to try to communicate with the public — I thought if we put those two things together, I really feel like I’ve found my niche.”

Serving as a school liaison sergeant, Wood oversees liaison officers at Evansville Vanderburgh School Corp. high schools and middle schools and suits up with Blondie for about 70 days of the year, including the summer months when he is able to ride every day. 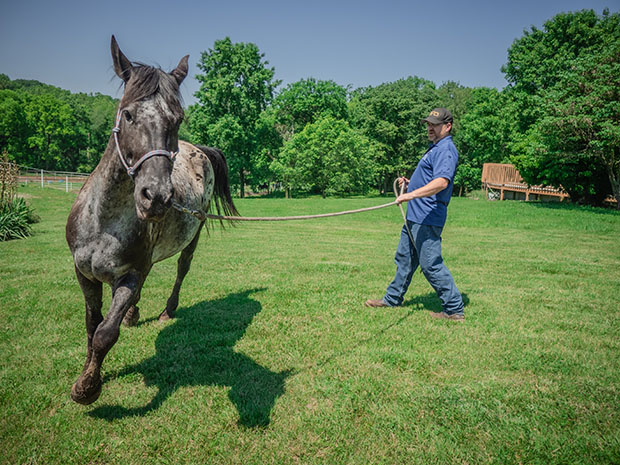 ▲ The Mounted Police have a strict training regimen, months-long trial period, and an annual safety test so that the horses are prepared for any sounds and situations they might experience while working large public events.

The Shawneetown, Illinois, native was raised riding horses at his grandfather’s property and joined the EPD in August 2006 as a third-shift motor patrol officer. Since then, Wood has served as a misdemeanor investigator, motor patrol sergeant, and most recently school liaison sergeant in 2019.

“I love horses. I’m not a dog person, not a cat person — I’m a horse person,” says Harper, who also grew up around stables. “I love the interaction; I love to ride. I love being a police officer, and now I get to do both together.”

The Elberfield, Indiana, native participated in 4-H as a child and joined EPD as a third-shift motor patrol officer in 2018. While he still works nights, Harper applied for the Mounted Patrol as soon as he heard Wood was recruiting.

Working these dual roles in the department, both officers still have high standards for the horses and the mounted force.

The horses are constantly in training. Each recruit undergoes a trial period and an annual test for safety and quality-assurance. Depending on the breed, horses mature at five or six years old, and officers can ride a well-kept horse into its 20s.

“We want to make sure they have a safe demeanor before we even accept one into the program to start,” says Wood. “Usually after three to six months, you’ve got a pretty good idea of where the horse is before we even take a horse in.” 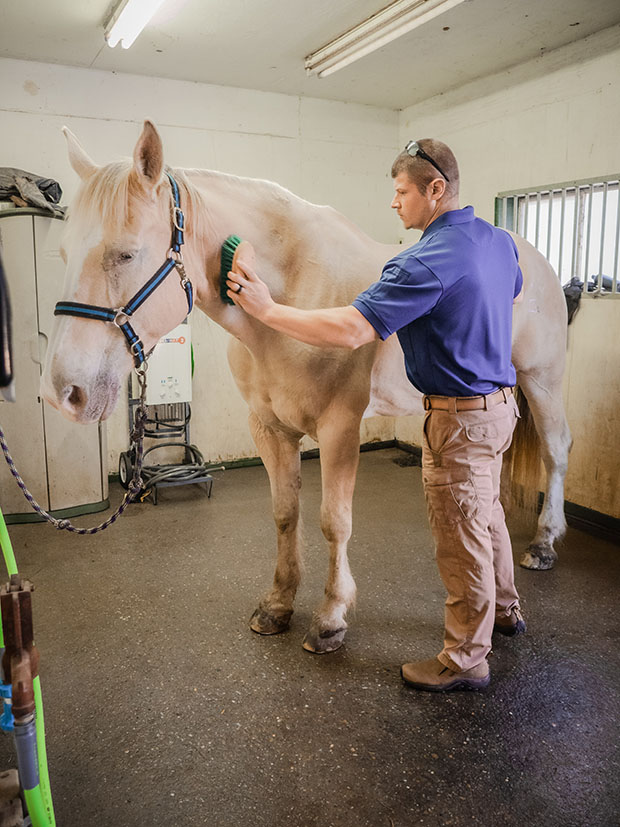 In years past, Wood has taken the patrol to a training school in Mobile, Alabama, where they spend 60 to 80 hours training and working the city’s Mardi Gras parades. At home, the horses are exposed to shopping carts, balloons, fireworks, and Harper and Wood’s children to prepare them for work.
To ensure their horses stay “sound” — equestrian vernacular for “healthy” — Harper and Wood also give Blondie, CJ, and Scotty regular vet checks.

“They have to be pretty rock solid to work the street,” says Harper. “I mean, it’s horseback riding, but trail riding and going out and riding leisurely is a lot different than being in the city or at a protest and having people throw stuff. Blondie is our gold standard; she is rock solid.”

“I think it makes a huge difference with the success of the program because we have good horses and we don’t settle for anything less than that,” adds Wood. “We want the best horses we can get.”

The Evansville Police Foundation, which provides additional resources to enhance public safety and law enforcement, also helps fund the Mounted Patrol. While the department pays the officers’ salaries and insurance and Harper and Wood own the horses themselves, the Foundation helps offset the costs of equipment and training for both officers and horses, as well as food, care, and housing.

Dedicating about $5,000 per horse per year, the Foundation has also been responsible for funding the program’s launch and promotions, such as baseball-style trading cards for each officer/horse duo.

“The city budget covers all of the required things, but if you want to launch a new program, like we launched the drone program and the Mounted Patrol, you need to have money coming in faster than it can be budgeted in flow. And that’s what the Foundation does,” says Foundation director Jan Davies. 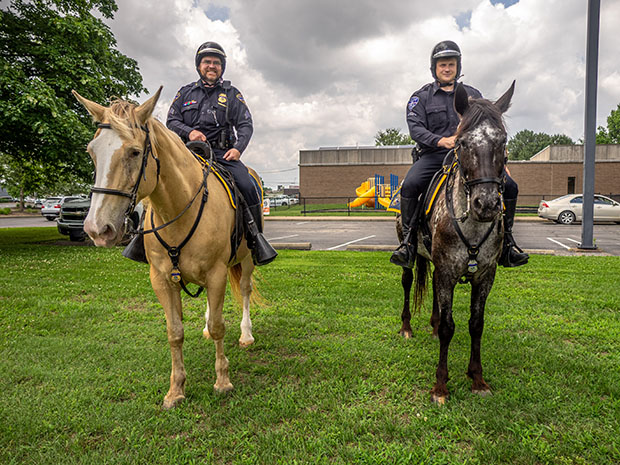 Tribute Equine Nutrition sponsors all of the horses’ pellet feed with an annual donation, and individuals and businesses donate to the Foundation daily.
But Davies says the Foundation is more than a financial organization. It recently launched a new Mounted Patrol curriculum in collaboration with Toyota Motor Manufacturing Indiana and University of Southern Indiana Center for Applied Research about personal safety, pet care, careers in law enforcement, and, of course, the horses. The curriculum will be available to local children and youth organizations, who can view the program online and then be visited by the Mounted Patrol.

In addition to working crowd control at large events such as the West Side Nut Club’s Fall Festival, school visits are one of the Mounted Patrol’s main duties. 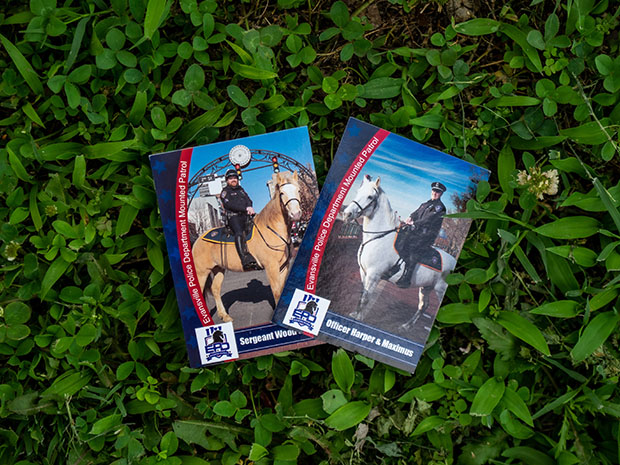 “It is a big community policing concept,” says Wood, when asked about the importance of the Mounted Patrol in the era of the Black Lives Matter movement and public opposition of police departments across the country. “(It’s) not just driving through a community, but slowing down and getting to know the people, the neighborhood.”

“People that don’t normally talk to us come up and talk. We sit there for 30 to 40 minutes with somebody that, if it wasn’t for the horse, wouldn’t want anything to do with you,” adds Harper. “I think a lot of people once they talk to us go away with a different taste in their mouth. Later on, if you ever interact with people, they remember you.”

As summer ends, Harper and Wood adjust to spending more time in their regular positions. During the school year, the officers have about two days a month with the horses. Meanwhile, Davies says the horses will continue to build relationships as ambassadors of EPD with the new curriculum.