Joni Mestas says it all started when she took her dog for a walk near Garvin Park. The littered area bothered her, so she started picking up. Soon she was bringing her own bags to collect trash during her walks.

“The litter was just so overwhelming I couldn’t even breathe,” says Mestas.

After seasonally helping the city’s department of parks and recreation for three years to pick up trash in Evansville’s 73 parks, she joined Keep Evansville Beautiful last year as the litter abatement education coordinator. Mestas almost exclusively works in the Downtown area, cleaning up the Economic Improvement District, which partners with KEB to help pay part of Mestas’ full-time and year-round salary.

“She is the perfect person for this job because she is just so inspired by keeping the city clean,” says Julie Welch, executive director of KEB. 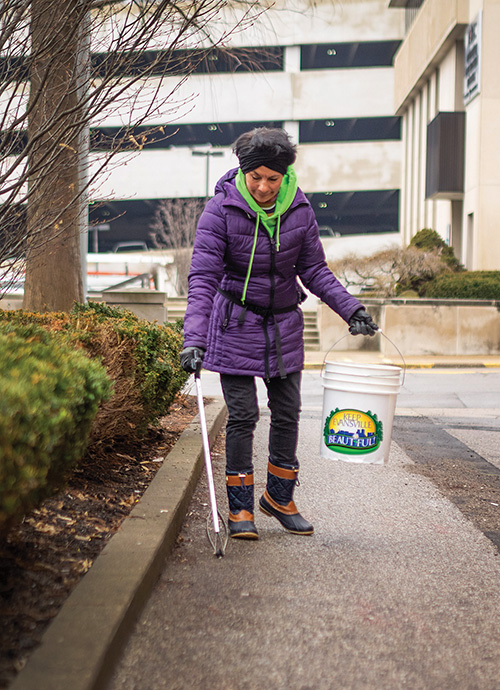 Her day usually starts around 5 a.m. on Main Street in her first of about five quadrants. After Main Street, she goes up and down side streets like Vine, Locust, Walnut, and Sycamore. Then, Mestas cleans around the Ford Center before heading to the METS bus station and on to the United Caring Services homeless shelter. Next, she loops down to Second Street to clean around Tropicana and then along the riverfront.

“What I do is take my truck, park it, and then I’ll do a clean up around that area,” says Mestas. “When I first started, I was walking everywhere. I would be walking 15 miles a day.”

On average, Mestas collects 35 5-gallon buckets of trash every day. For her, cleaning litter is how she shows love for the city.

“I love this community,” says Mestas. “The people here are trying to make a difference, and I just want to help elevate that.”